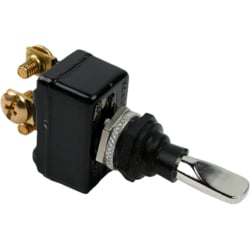 The DC rated 50 amp switch allows you to "stop" the turbine. The switch first disconnects the battery and then shorts the turbine output wires together causing the turbine to stop spinning (in high winds the blades may spin slowly). Shorting the turbine does not cause any damage or additional wear on the unit.

Here are some tips from the altE staff

As previously noted, poorly labeled for use. Mine broke during disconnect after first month. Tabs simply too puny and weak for the reccomended wire gauge. Will design my own for this year.
Details

The switch works fine, although you have to check the positions with an ohm-meter. As another summary stated, it is a little on the small side as I was required to use #6 AWG wire and reduce down to # 8AWG to fit the terminals. It seems that the reduction causes a in line loss stepping down from ...
Read the full review

Let me start by saying that I am not very knowledgeable about electronics, but I did set up my turbine completely alone, so that may count in my favor.

I used the wire gauge that is recommended by the Air-X, and the switch is not made for heavy gauge wire. It took a lot of effort to g...
Read the full review