5 More Solar Myths: Starting with Stick-it to the Man 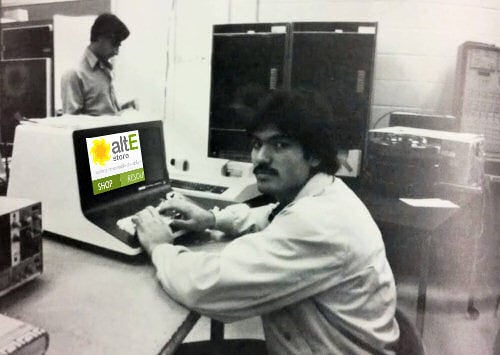 Solar Myth#1: You Can Save Money by going Off Grid (aka: Stick it to the man)

I have one word for people who think they can save money by going off grid. Batteries. A grid tie solar system, by comparison, uses the grid to handle any extra power generated by your system that you don’t use. It gets sold to the electric company, who in turn sells it to your neighbor to use. You can then buy any electricity that you need from the grid, day or night. If you “cut the cord” and go off grid, you are now responsible for making and storing all of the power you need. If you don’t have that connection to the grid, you have to generate and store all of the power you use. This requires multiple steps, from greatly reducing your energy use, to installing a large battery bank, and potentially getting a fossil fuel burning generator for times when renewable sources can’t provide enough power.

Currently, the cost of batteries makes an off-grid solar power system more expensive per kWhr than paying for utility power. However, grid tie solar without batteries is cost competitive today.

The initial cost of going off grid is higher than staying connected to the grid for most locations in the US, and there are more recurring costs with off grid, including fuel for the generator and replacing the batteries every 5 to 12 years, depending on the battery technology and how well they are treated.

This is not to say going off grid is never a good option. Off grid living can be fantastic. But only if done for the right reasons, and unless the costs to bring the grid to your location are astronomical, saving money isn’t one of them. We’ve put together some pre-designed off grid home solar systems as a starting point for your home. Another way to go off-grid and save in overall costs is to consider creating a micro-grid with your neighbors, sharing one larger battery bank between all of you.

Should you read this blog in 10 years from now, we hope that this part of our blog is no longer true and that batteries have come down enough in cost that sticking it the large centralized power companies is the way to go financially. Until then…

Solar Myth #2:
Solar Panels (without batteries) will Provide Me Backup Power When the Grid Goes Out

This one is answered with an “it depends”. Depending on what solar inverter you use, you may or may not have some power available when the grid goes out. All grid-tie inverters are required to shut down their connection to the grid immediately when the grid goes out. This is to protect the lineworkers repairing the power lines. If they think the lines have no power on them, and you accidentally send power out to the line, they can be seriously injured or killed.  This means shutting down the inverter connection to your main breaker box. The SMA grid-tie inverter with Secure Power Supply feature will provide power in a grid outage while the sun is shining.

However, one grid-tie inverter manufacturer, SMA, has developed an inverter  with the Secure Power Supply feature. This will give you one outlet in your house that can put out up to 1500 watts of power, provided the sun is out and your solar panels are able to produce that much. This can be enough to charge up your phones, laptop, tablets, and rechargeable lanterns. Other brand inverters do not have this feature, and you will be without power just like everyone else when the grid goes down if you don’t have a battery backup.

Note that having a generator with a grid tie solar system is an option, you just need to make sure it is installed on the other side of a transfer switch so that it does not back-feed into the electric utility grid or into your grid tie inverter.

If backup power is important to you, rather than installing a straight grid tie solar system, install a  hybrid grid tie with battery backup system. This will give you the ability to have power when the grid goes out, as well as the ability to net meter with the grid and buy and sell power as needed. The batteries will be an additional expense, so be sure to calculate that into the equation. In some states, you get more back from the utility company if you sell back power during non-peak solar times, such as early morning or evening, by using hybrid inverters with batteries. See our previous blog on Power Shifting and Load Shedding for more details.

If you already have a grid tie solar system installed, you still have  options available to install a battery backup system with your grid tie solar system. This can be accomplished a few ways, but they generally require adding a second inverter that connects to a battery bank and your critical loads breaker box. You can charge the batteries during the day with your solar panels either through your inverters (AC Coupling) or through a solar charge controller (DC Coupling). Most grid tie solar systems need little to no maintenance. If a particularly incontinent flock of birds fly overhead your solar array, you may need to give the solar panels an occasional hose off, but generally, the rain takes care of keeping them clean.

If you do have a battery-based solar system, either off grid or hybrid grid tie with battery backup, and you have flooded lead acid batteries, then you will have to do regular checks of your batteries. The water and specific gravity levels need to be recorded, and water added. A Water Miser Vent Cap or an auto watering system like the Trojan Industrial Battery Watering Kit can reduce the amount of watering needed, but it is still essential to routinely check on the batteries.

However, if you have sealed batteries, like AGM or saltwater batteries like those from Aquion Energy, there is very little you need to do, just give an occasional visual inspection to make sure everything looks good.

There are those who believe that with a net-metering grid tie solar system, where the electric company buys back any extra solar power at the same rate that the customer buys grid power for, it ends up costing non-solar customers money. The argument goes that the people who cannot afford solar are paying for those who can.

However, studies have shown that both the customers and the utilities benefit from a distributed solar generation, where many solar power systems feed into the grid. In most locations, the peak loads that the grid encounters are during the day from air conditioners and businesses who consume most of their power during the day. This is when solar power systems are also generating most of their power. As such, the solar systems are helping to reduce the amount of time the utilities’ more expensive standby generators must be run to keep up with the peak demand. This also helps reduce the need to build new expensive power plants.

Last year, the Maine Public Utilities Commission commissioned Clean Power Research to determine what the true value of solar is to the state. The  Maine Distributed Solar Valuation Study  factors included electricity that the utility did not need to buy from their regular wholesale supplier and electricity they did not have to generate themselves. They also included figures from the EPA determining what the social cost, in dollars, of reduced pollution. They found that the distributed solar energy was worth $0.18 per kilowatt hour (/kWh), more than what ratepayers are paying, and more than the $0.13/kWh that solar owners are getting paid. This showed that there is both an economic and environmental advantage to all when solar power is distributed on the grid. When they took a longer term view of 25 years, the value went up to $0.33/kWh. None of these numbers took into account the avoided costs of building new natural gas pipelines or new power plants, so this value has the potential to increase.

What this study showed was that distributed solar power provides a benefit to society that is worth more than what is being paid.

The solar industry also generates jobs, a lot of jobs. These jobs cross a wide range of skill levels, including engineering, manufacturing, installation, marketing, and sales. The Solar Foundation estimated there were close to 143,000 solar jobs in the United States in 2013, including 24,000 new jobs announced that year. The rate at which jobs were added in 2013 was more than 20 percent over 2012 levels. That number continues to increase as the solar industry grows. More jobs in the economy benefit everyone.

#5 The Next New Solar Panel Technology will Make Your Panels Obsolete. Wait for it.

This used to be high tech, and centralized utility companies are using technology decades older. Will the future of electric networks change similarly?

The Internet is full of cool articles about the next big leap forward in solar technologies. Nanotechnology, see-through solar panels, and solar roads all capture our imagination, but unfortunately, none of them are at the price point or efficiency levels to make them a commercially viable solution yet. Efficiencies are slow to increase, the next “big leap” is many years away and is likely to be a gradual evolution. In the last 10 years, the efficiency of average readily available silicon solar panels has increased from about 12% to 16%. In those ten years, your system would have paid for itself already, and had you waited, you would have missed all of those savings. And let’s face it, there is always going to be “the next big thing” just around the corner. What sort of phone, TV, or computer would you still be using if you were still waiting for the newest technology? The latest in centralized computing… in the 80’s. Computing has since gone to distributed and cloud based. Distributed solar power can modernize old centralized power companies of yesterday. (Photo from Amy’s high school yearbook)