Renewable Energy System in Your RV or Boat

Solar and wind power systems are more frequently being used on RVs, sailboats and yachts to do everything from provide a main source of power without the use of a noisey generator to keeping the main battery bank from slowly discharging while the boat or RV is not in use. In this article learn some tips of using alternative energy systems in your RV or boat and some of the differences between using them in one environment versus the other.

Renewable Energy Systems in your RV or Boat 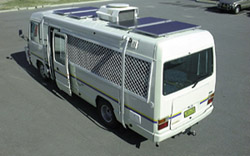 Solar panels on RVs is great way to extend your independence from running your generator as often.

Solar and wind electric systems can both be used effectively to charge the large battery bank in an RV or a boat. Due to the space limitations for both a solar panel array or a turbine that's capable of much more than 400 watts, you can't expect to be able to run all of the appliances you could run a normal home. Most notably it is not appropriate to run air conditioning nor electric heating systems off of wind or solar electric. These devices simply consume too much power for even a moderately sized system to handle. However, solar and wind power have been used for years to effectively power lights, microwaves, televisions, radios, small water pumps among many other electronic devices you find in an RV or a boat.

Many people use a very basic and small solar electric charging system to keep their battery bank topped off while leaving their RV or boat unused a several months out of the year. By trickle charging their batteries during periods of non-use, they greatly extend their lifetime. Batteries, left alone, will discharge by themselves 5% or more per month. A simple small solar electric panel connected to the battery bank will prevent this discharging from occurring.

In most ways a RV or a marine wind or solar electric system is the same as an off-grid renewable energy system for a home. All of these systems share the basic components of a wind turbine or solar electric panels, charge controller, inverter, deep cycle battery bank, cabling, and AC / DC breakers and fuses. In most cases, the primary difference is that the solar panel array or wind turbine is smaller than what would be on a typical off-grid home. On an RV or boat there is a limited amount of surface to mount a solar electric panel array. Because of vibrational noise, only the smallest of wind turbines can be used, such as Southwest Wind Power's Air-X series.

Typical wiring diagram of an RV who charges its battery bank with solar. Courtesy of Kyocera Solar.

Typically an RV or a marine system will also have a smaller battery bank than a full home system. RV and marine systems almost always work at 12 volts DC and frequently have several appliances on board that work directly off of the 12 volts, like lights and water pumps. On the other hand, off grid home systems will frequently use 24 or 48V DC once the size of the inverter has gotten much above 2000 watts or the solar panel array or wind turbine is located more than a few dozen yards from the battery bank. In an RV or marine system, the distances between the various components and the 12-volt loads are short and large wire sizes aren't usually required.

Typical wiring diagram for a boat who charges its battery bank with solar. Courtesy of Xantrex.

Another significant difference between an RV system and a whole home system, is that typically the high load appliances that are found in RVs such as A/C units or electrical heaters are only powered once the RV has stopped and connected to "shore" power (where the RV literally connects up to the local electrical grid) at a local campground. An off-grid home is not likely to use A/C or electrical heaters at all because they are such enormous loads that can't be cost effectively run on our solar or wind power system. Instead a person living off-grid would rely upon fans or evaporative coolers if they were in a dry climate for cooling, and use wood, gas, fuel oil or solar heating systems for heating.

Unisolar solar panels used on back of a boat.

Renewable energy systems for marine environments tend to have the tightest restrictions when compared to an off-grid or RV systems. The components for these systems all need to be able to handle constant exposure to the corrosive salty air. There are special marinized versions of most of the major components, like wind turbines, solar charge controllers, inverters and solar panels themselves. All of these components are specially sealed to not allow the corrosive salty air wear down the electronics.

Similar to the higher quality inverters for off-grid home systems, RV and Marine inverters almost always include an AC charging system that will automatically charge up the battery bank when RV or boat is connected to "shore" power.

It is very common for people to interchange components that were originally marketed towards RV or Marine uses with off-grid applications, and vice-versa. The application that needs the most thought before using components designed for other markets is that of marine, because of the tougher environmental conditions.

As with off-grid home systems, we would not recommend that a customer try to run very large electrical loads like an air conditioning unit or an electric heating system off of a renewable energy system. These loads would likely drain the typical RV or marine battery bank in a matter of minutes. To further reduce the load on their system, an RV owner might consider using a LP gas refrigerator instead of a normal AC refrigerator, since they can be run with no electricity at all.

When considering an inverter for an RV or a boat, be sure to get one that has an AC battery charger incorporated, so that when you connect to shore power you can completely charge up your battery bank quickly if your renewable energy system was unable to. If you are planning to use your inverter to power anything that has a motor in it (e.g.a refrigerator, fan, etc.) be sure to use an inverter that provides a pure sine wave AC signal. Less expensive modified sine wave inverters will cause the motors in these appliances to run hot and gobble up 30% power from your battery bank (draining that precious reservoir of energy even faster).

The SolarBoost 2000e was one of the first MPPT charge controller designed specifically for RV use.

In solar electric panel systems, use a solar charge controller that use Maximum Power Point Tracking (MPPT) technology. These controllers are up to 30% more efficient in charging your battery bank and well worth the extra money.

In a typical off grid renewable energy system, much care is taken to be sure that shadows from nearby buildings or vegetation don't fall on a solar panel array. In RV or Marine system you simply cannot plan whether or not the mast of your sailboat or the twig of a nearby tree is partially shading a solar array. For most types of solar electric panels, just a little bit of shadowing will greatly reduce the output of the entire solar panel array by 30-50% or more. However, amorphous or thin film solar electric panels (like those from Uni-Solar, Iowa Thin Film, Kaneka and Global Solar among others) work much better under these partial shading conditions. This type of solar panel will only decrease its power output according to the percentage of the panel that is actually shaded. The downside with these panels is that they are larger in overall area for the same given wattage of a traditional poly-crystalline or mono-crystalline solar panel.

One Further Tip for RV Systems 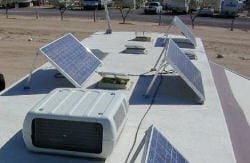 Special adjustable solar panel mounts for RV can be used to optimize the position of the panels to take in the most sun as possible.

It is most common that the solar panels on RVs are installed with aluminum mounting feet that raise the panels just an inch or so off of the roof of the RV. There are also special RV mounting systems which allow you to raise and angle up the solar panels so that you can optimize their orientation towards the sun. These racks or mounts are not usually designed to be in the upright position while the vehicle is in motion, so you need to remember to bring them down before going anywhere. Also, be aware that while these mounts tilt up they do not swivel to point south, you will need to orient the entire RV to optimize the direction of the solar panels.