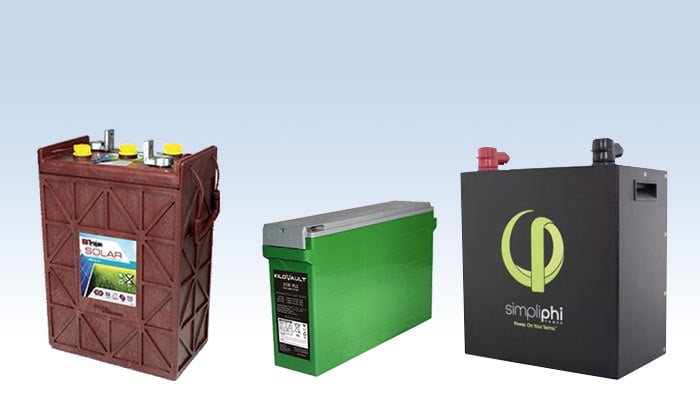 Read more about the deep-cycling batteries used in solar and other renewable energy applications and the differences between flooded lead-acid and sealed batteries.

Deep Cycle Batteries (also known as ‘solar batteries ‘) provide electrical storage in renewable energy (RE) systems. If you want to use your electricity anytime other than when the system is producing it, you will need batteries. So if, during a nice sunny day, your solar array produces a lot of electricity, you’ll need batteries to access that power after the sun goes down. And although it may seem counter-intuitive, it’s also true that if you have a wind turbine or solar panel array that is connected directly to the electric grid without batteries, you will not be able to use the power they produce during a grid power outage. If you need to be able to use power at any time, you need batteries. But which ones? The first thing to do is to identify the type of battery you will use in your system.

Deep cycle batteries used in renewable energy (RE) systems are different from car batteries and that difference is critical. RE systems by nature are cyclical: energy is captured and stored, then later consumed, in a (usually) regular. For example, in a battery-based solar electric system, the energy produced daily by the solar panels is stored in the battery bank, which is then used by loads at night or on not-so-sunny days. This repetitive process subjects the batteries to a slow, daily charge and discharge pattern.

Car batteries are not meant to be used in this way. They can release a great deal of their stored energy at once, to start the engine, then they immediately receive a rapid recharge from the car’s alternator. They’re not meant to recover their charge slowly, as would happen in a solar electric system. They’re very impatient that way! In fact, a car battery in a RE system would quickly die and need to be replaced. Deep cycle batteries, on the other hand, can be gradually discharged by as much as half of their capacity and will patiently await gradual recharge. When properly maintained, a deep cycle battery can last four to 10 years. 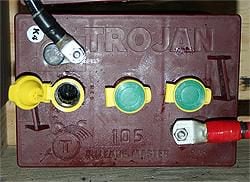 Check out the watering caps on this baby! Watering caps can only be used on flooded lead acid batteries – not sealed ones.

Flooded deep cycle lead-acid batteries (FLA), also called “wet cells”, are commonly used in solar, wind and hydroelectric renewabl energy systems. They are often the least expensive type of deep cycle battery and can last the longest. They also come in a wide range of sizes.

In FLA batteries, a sulphuric acid solution is the which reacts with the lead plates in the cells to produce electricity. When FLA deep cycle batteries are recharged, electrolysis occurs, producing hydrogen and oxygen gases in a normal process called “outgassing”.

These gases (hydrogen and oxygen) may escape the cells through the filler/vent caps, creating two problems: the fluid loss means that the fluid level in the battery goes down, potentially exposing the normally “flooded” lead plates – not a good thing. So using FLA batteries in your system means that you are committed to regularly monitoring and maintaining them by adding distilled water to each cell as needed. Water Miser vent caps can help prevent some moisture escape, thus reducing watering frequency.

The other problem is the presence and accumulation of explosive gases. Hydrogen and oxygen gases are extremely dangerous and must be properly vented – to the outside air. So it’s clear that with FLA batteries, battery maintenance is an essential part of system maintenance. 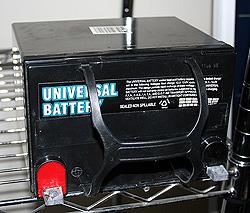 Don’t try putting a FLA battery on its side like is being done with this sealed battery.

One great advantage of sealed deep cycle batteries is that they can be placed in any orientation: upright, on their sides, and, in some cases, even upside-down. In a sealed battery, the electrolyte is suspended in either an absorbed glass mat (AGM) or in a gel.

Sealed deep cycle batteries cost more than flooded lead-acid batteries and don’t last as many charging cycles; however, they are the preferred choice for applications requiring frequent battery handling, or where the system needs to be left unattended in a remote location. Like FLA batteries, sealed batteries have vents to allow hydrogen to escape when necessary, though this should not normally occur. The difference is that because the batteries are sealed, there is no way to replace the escaped moisture by adding water to the cells; that’s why a sealed battery won’t last as long as an FLA battery.

Gel cell batteries have traditionally been a bit more expensive than AGM batteries; however, they have the unique advantage of performing better in very cold temperatures or in very deep-discharge applications and inherently they require less maintenance, since you cannot refill the electrolyte levels. On the other hand, charging them can be more delicate. If you overcharge them, the batteries will off-gas and permanently remove water suspended in the gel or glass mat (since distilled water cannot be re-injected into sealed batteries). 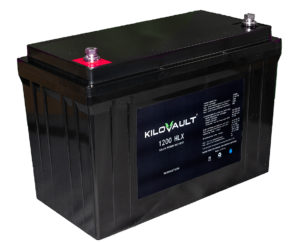 Lithium deep cycle batteries are the sexy new battery tech on the block.  There are many different types of lithium batteries.  Lithium Iron Phosphate (LiFePO4) is found to be the safest technology, especially in residential battery-based solar systems.  It is a great drop-in replacement for sealed lead acid batteries.  Why? Here are some reasons:

Which Deep Cycle Battery Type is Right for Your Application?

In most cases, FLA batteries are an excellent choice for RE systems because of their cost-effectiveness, particularly for those systems which require a lot of energy storage. But FLA batteries do require maintenance! Regular monitoring and maintenance will ensure your system functions properly and your batteries live a long, healthy life. On the other hand, if you’re using the deep cycle batteries in a remote area where regular maintenance is not possible, sealed batteries will be a better option. Furthermore, sealed batteries conform to situations with space constraints that require you to store your batteries in unusual orientations or where venting is not possible.  Lithium batteries are the cream of the crop.  They will will more efficiently store and deliver the renewable energy you have generated, with no maintenance on your part.

One of the main advantages of sealed/lithium batteries versus FLA batteries is increased ease of transportation. Sealed deep cycle batteries and lithium batteries can be shipped by air (weight permitting) or freight, but FLA batteries are often classed under “hazardous materials” rules, which restrict shipping options. The U.S. Post won’t ship your FLAs!

All batteries are sized based on their nominal voltage and (Ah) of storage. Classification systems include battery “groups”, but listings by voltage and ampere-hours capacity are commonly available from manufacturers as well.

Available sizes in all batteries vary greatly. The smallest AGM batteries hold less than 20 Ampere-Hours (Ah); the largest approach 1,000 Ah of storage. Usually, these very large batteries are only 2 volts each. If you want to use them in a 48V system, you will need 24 of them, wired in series. Such large batteries could weigh 200-300 pounds or more. In lithium technology, the capacities range from 50Ah to over 300 Ah, but you’ll need a lot less of them in your battery bank to get the same useable capacity, due to the higher cycle life.  Often size and weight constraints affect the final battery choice. Be sure you’ve got the equipment and space to deal with such oversized batteries before you order them. See our deep cycle batteries selection to see a sample of the deep cycle batteries altE offers.