Solar and Rockets in Maine – A Match Made in the Heavens 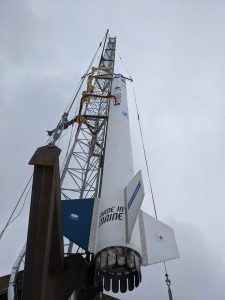 On January 31, 2021, just as the bluShift Team were in final preparation for Stardust 1.0’s rocket launch countdown for 2:47PM EST, an alarm beep can be heard in the distance of the live stream. Just off mic you hear “Oh no”, then nothing. I respond to no one in particular on my end of the internet with, “Oh no? Oh no, what?” The only response is what is supposed to be calming background music. Instead it sounds like the suspenseful soundtrack to a Stephen King movie. The text commentators on the live stream are all asking the same critical question. Oh no WHAT? Seconds pass, alarm sounds again, the narrator explains that the launch is on hold.

Some snowmobilers ignored the warning signs and drove onto the launch field with seconds to go. There is a reason you need a clear weather window when launching a rocket. You need to make sure you can see any unauthorized planes that decide to fly through the launch zone at a less than opportune time. Apparently in Maine, that window includes watching for folks on their sleds, out for a ride. While the snowmobilers were able to turn around to warm up with some Allen’s Coffee Flavored Brandy, no such end was in sight for the frigid crew of the Stardust.

The weather was cold the day of launch, as cold as you would expect it to be in Maine in January: -14 degrees Fahrenheit (-26 degrees Celsius). The bluShift launch site at the Loring Commerce Centre has wonderful indoor facilities, but as you can imagine, it’s tricky to launch a rocket indoors. Since their original launch date was set for September, it made perfect sense to set up their own facilities outside with trailers. These had few provisions to provide the comforts of home. Comforts like electricity and heat. They had to make their own, which became a little more tricky in January than September. Luckily, they know a guy that can make that happen. 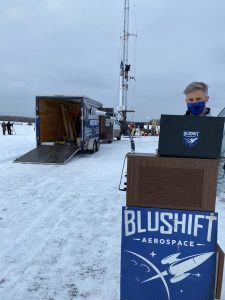 Aerospace and Solar go hand-in-hand, at least as far back as Vanguard 1 in 1958. altE CEO Sascha Deri continued this proud tradition by founding bluShift in 2014. bluShift founder and CEO, Sascha Deri happens to be the same man who is co-owner and CEO of altE Store. altE Store is known worldwide for making electricity where there is none available from a utility grid in remote locations, like a cold rocket launch location in Maine.

bluShift had three portable electric systems, based on their needs. The two portable KiloVault RES-Q units they had each provided power for computers, cameras, heaters, and lights in two trailers. 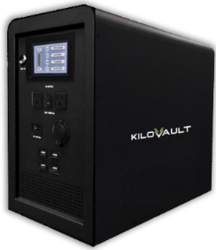 Each RES-Q unit has a 1500W pure sine wave inverter and internal 1200Wh 12V lithium battery, and bluShift attached to each an external 1800Wh lithium battery. So they had plenty of energy each day to power their loads. However, lithium batteries don’t like getting recharged below freezing temperatures. They can use their stored energy  to run loads in the freezing cold, but not to recharge. Since it never warmed up above 20F during the day, they couldn’t be recharged with solar, and bluShift staff had to bring the units and the batteries back to their field office each night to warm them up to above freezing and recharge them with their internal AC chargers.

I’ve mentioned the cold many times. And I wasn’t even there. For those who were there, the cold was not only a constant reminder they were in Maine; it also presented technical difficulties for bluShift to overcome. Their network server froze, so they duct taped chemical hand warmers to the server (Seth is still finding more packets in his pockets). With their portable electric systems, they were able to place a 300W heat gun in a box with the server to thaw it out. 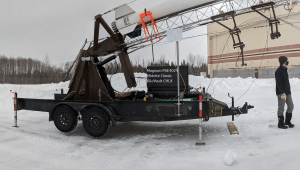 The bluShift launch trailer had a more permanent setup in place.

Their third power system can be described more as semi-portable. They modified a truck tool box to be an onboard power supply for their launch trailer. Wherever their rocket went, so did their power. Their solar system consisted of two 150W solar panels, a Midnite Solar Classic solar charge controller, a Magnum Energy MSPAE4024 4000W inverter/charger, and 4 KiloVault CHLX 3600 lithium batteries. This provided them an impressive amount of power on site, as well as 120V/240V, and 24VDC options, depending on tier load. The 24VDC was used by their hydraulic piston to move the rocket tower. The 120V leg powered their heater to their oxidizer tank and their onboard cameras and antennas. The 240V allowed pumps to transfer fluid from one tank to another. 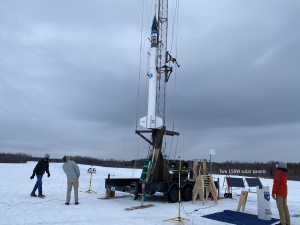 In the event they needed even more power, they had a Honda 2000W gas generator for additional charging through the Magnum inverter/charger. Now wait a minute… Didn’t I say it was too cold to charge lithium batteries? Normally it would be. But this system was using special cold-rated CHLX batteries by KiloVault. These batteries have a special feature that diverts some of the charging power to an internal battery heater. When it is below freezing, any charging power is used to heat the battery to around 42F, well above freezing. Once the internal heal level is reached, it can use the solar and/or the generator to charge up the batteries, providing them additional power as they need it. The added feature of Bluetooth capability was extremely useful to keep track of the battery status. Watch a video on the CHLX cold rated batteries for more details.

The bluShift team has a fourth solar unit set up at their regular (non-launch) site in Brunswick, Maine. It consists of a Morningstar TS45 charge controller, a Schneider SW4024 inverter/charger, and is charged by solar power only. We’ll do a seperate story on that unit later. 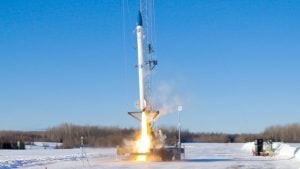 I’m happy to announce the launch of the 20-foot high Stardust 1.0 rocket went off at 2:47 PM Eastern Standard Time (EST) on Sunday, January 31st, reaching an apogee of 4,054 feet (1,236 meters). You can see videos of the event at their website. Maine’s first commercial rocket launch – and the world’s first rocket launch powered by bio-derived fuel – was a historic success. We’re proud to have supplied so many of the power systems that made it possible.