Advantages of Solar Energy Through The Years

Advantages of Solar Energy Through The Years

Light has been around since the beginning of time, but understanding how to convert it into electricity is relatively new, right? It depends on your perspective and definition of “new.” And through the years, the advantages of solar energy over other sources has changed as well.

The Timeline of Solar Cells on Wikipedia starts surprisingly early – in 1839. French Physicist Alexandre Edmond Becquerel was only 19 years old when he first observed the Photovoltaic Effect using an electrode in a conductive solution that was exposed to light. Charles Fritts created the first working selenium solar cell in 1883 – with an efficiency of 1%.

Theoretical work continued throughout the 1800’s and early 1900’s. It’s interesting that Albert Einstein is best known for his theories of Relativity and his famous E=MC2, yet he was awarded the Nobel Prize in Physics for his work on the photoelectric effect. Advances in materials and manufacturing continued through the first half of the 1900’s.

The modern photovoltaic solar cell can trace its origin to Bell Labs, the same division of AT&T that had created the first transistor in 1947. Just a few years later, Scientists Gerald Pearson, Daryl Chapin and Calvin Fuller created the first silicon solar cell that could generate a measurable current. The new development was demonstrated at a National Academy of Science meeting in 1954, and was about 6% efficient.

At the time of the announcement by Bell Labs, the New York Times called the invention “The beginning of a new era, leading eventually to the realization of harnessing the almost limitless energy of the sun for the uses of civilization.”

Energy production in the 1950s was a rapidly changing landscape. Power plants used abundant coal. Petroleum products were powering the thirst for the automobile. With the recently developed nuclear power generation, who needed a source with a measly 6% efficiency?

The world changed on October 4th, 1957. The Soviet Union launched the first artificial satellite to orbit the Earth, Sputnik 1. The idea that the USSR had beaten the West into space was a shock to governments, scientists, and the public at large. Sputnik proudly broadcast its radio signal as it circled the planet – until its batteries ran out after 21 days. It lasted another 2 months in a silent orbit before burning up in the atmosphere.

The space race was on. The first US satellite launch attempt on December 6th, 1957 was a failure – blowing up on the pad. The first successful launch was on January 31, 1958, when Explorer 1 became the first spacecraft to detect the Van Allen radiation belt. It continued on its mission for four months, until its batteries ran out.

On March 17th, the United States successfully launched its second satellite in secret – Vanguard 1. During development, a debate raged on how to power the device. Chemical batteries were the default choice. Dr. Hans Ziegler argued that the satellite should use the newly created silicon solar cell for power. The US Naval Research Laboratories (NRL) was reluctant to use the untested technology on such an important project. In the end, Vanguard 1 used both power sources. Dr. Ziegler was vindicated when the batteries failed after about a week in orbit. The solar-powered Vanguard continued its mission uninterrupted for several years. 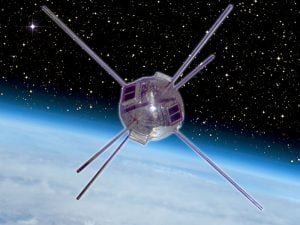 An artists rendition of Vanguard 1 in space

The advantages of solar energy became clear in satellite and space exploration applications. It continued as the preferred satellite power source throughout the 60’s. Satellites for communication, scientific, and intelligence applications expanded their use of solar cells. The Telstar 1 communications satellite was a prime example. It was developed by Bell Laboratories and launched by NASA in 1962. It enabled the very first live television broadcasts between the United States and Europe. 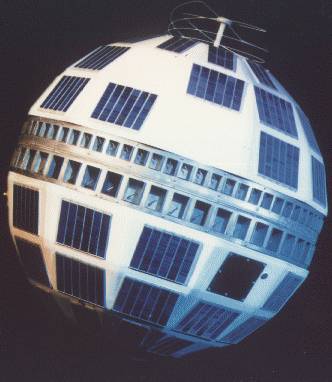 image: Telstar 1 developed by Bell Labs launched by NASA in 1962. It enabled the first live broadcasts between the United States and Europe.

When you’re spending a million dollars on a satellite, the price of solar cells isn’t a limiting factor. One of the key advantages of solar energy for space applications was the power to weight ratio. Solar cells were lighter than batteries available at the time and could provide a continuous power source. Despite their success in space, the high cost of solar cells kept them out of reach for terrestrial use.

The situation started to change in 1973 when Elliot Berman founded Solar Power Corporation with backing from Exxon. Elliot’s saw cost as the obstacle to be overcome before solar energy could have practical commercial use. He estimated that the production costs could be reduced by using less expensive materials and mass-production methods. His goal was to reach $20/watt – a price he believed would leverage the advantages of solar energy for remote locations with modest energy needs. Offshore Oil rigs needed warning lights and horns to alert ships and avoid collisions, and typically used batteries for this at the time. Elliot and Exxon understood that many applications like this could be tackled with a cheaper Photovoltaic (PV) solution.

Cost proved to be a stubborn obstacle, but in 1977 a major milestone was achieved. The price per watt crossed the $100 barrier. Solar cells could be produced for an inflation-adjusted $96 per watt. Elliot Berman’s magic number of $20 per watt was reached in 1981 and the chart below shows how dramatically costs have fallen since: 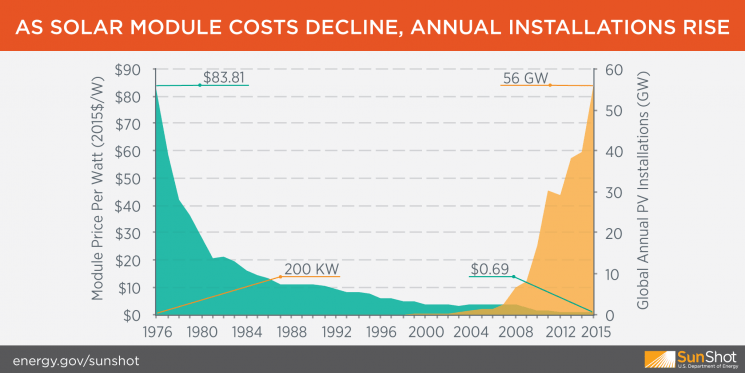 Cost reductions through material and production methods were only half of the story. To really drive down costs, the market needed to expand. As the chart shows, solar modules were running at $84/watt in 1976, and the global annual installations of solar amounted to 200 kilowatts. In 2015 the estimated production price was $0.69/watt and the market had risen to 56 Gigawatts. What helped this fantastic transformation take place?

The Alternative Energy Store was founded in 1999 and today is known as altE Store. The timing was just about perfect as interest in renewable energy was growing and the price of solar and other energy alternatives were falling. The environmental advantages of solar energy were becoming clearer and solar installations were becoming more affordable. altE was part of a movement that would spread globally – individuals, suppliers, educators working together to move solar and other renewables forward. 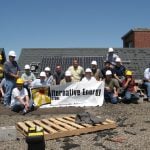 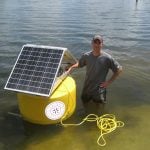 altE customers prepare a buoy for deployment to the Arctic – no, the picture wasn’t taken in the Arctic 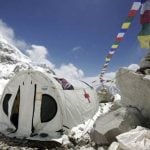 Over the years altE has helped countless do-it-yourself and local installer customers around the world to apply renewable energy products. Our vision is to “make renewable do-able,” but we can’t do it alone.

A little help from our friends

There have been several major initiatives within in US and countries around the world to encourage the use of solar energy. Reacting to the oil crisis of the early 70’s, the US established the Solar Energy Research Institute in 1977, renamed and renewed under President George H.W. Bush as the National Renewable Energy Laboratory in 1991.

The most dramatic changes happened from 2000 onward. Germany established aggressive incentive programs to encourage solar energy investment. Other European countries followed suit, as did the US in 2009. China and other Asian nations made major investments in solar energy–driving the annual installed capacity of PV systems from about 200 kW in 2000 to 56 GW in 2015.  During this period the price-performance of solar cells was driven from $10/watt to less $0.69/watt.

Harvesting power from the sun takes more than the photovoltaic cell. There is a whole ecosystem built around solar panels to create a useful electrical system. Inverters transform the DC power generated by the PV cells into the AC power used in most residential and commercial applications. The panels must be mounted securely to the building roof, ground, or pole used to position the panels to capture the sun’s rays. There have been dramatic advances in battery technologies and the controllers that keep them charged. 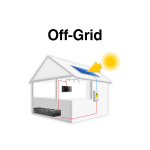 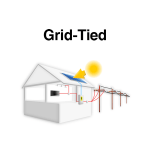 In the early days of solar, each installation was an isolated system of its own. “Off-grid” systems use batteries to store the energy produced by the solar panels until it is needed. Energy collected during the daylight hours can be used at night. These types of systems are very popular today to power remote locations where grid power is not readily available.

Applications evolved to systems that could be used together with the electrical grid from your local utility company. A “grid-tied” system allows the homeowner to “sell” excess power generated by day to the grid, and use utility-generated power at night.

The latest evolution in solar power systems is “grid-tied plus storage,” which combines the advantages of solar energy from both off-grid and grid-tied. California, Vermont, and Massachusetts all have incentive programs to encourage the installation and use of these types of systems beginning in 2020. These configurations use intelligent inverters that can allow the utility company to tap into the energy stored in the consumer’s batteries during peak loads. Battery storage ensures that the energy is available regardless of time of day and current sun conditions.

As technology has evolved, so have the associated advantages of solar energy:

Back in 1954, the New York Times said the solar cell was “the beginning of a new era, leading eventually to the realization of harnessing the almost limitless energy of the sun for the uses of civilization.” The key to achieving this is something called “grid parity.”

Grid Parity occurs when the cost of energy produced by a given technology (solar, wind, etc.) becomes the same or less than the current cost of production by conventional methods. There are two sides to this equation – the local cost of production and the amount of sun available.

Some parts of the world have already reached Grid Parity. Spain was first to reach it in 2013. Hawaii and other islands that use fuel oil (diesel) to produce electricity have or will soon reach it. Islands do not have the luxury of having large numbers of conventional power plants to generate electricity for their local grid. Reliability and self-reliance are two additional factors that increase the penetration of solar energy in local markets.

As the cost of solar installations continues to fall, more locations will reach Grid Parity. Adoption of solar energy solutions will grow at an even faster rate that it has in the past 10 years.

Jay Galasso
Jay is an engineer at heart, going between the big picture (why are we doing this) and the details (will it work). He helps the sales and marketing teams at altE stay fresh and focused on Making Renewable Do-able for more and more customers.