The History of altE U

They say knowledge is power. Never were the two so analogous as when altE taught classes on the design and installation of alternative energy systems.

For Sascha Deri, CEO and co-founder of altE, education was a key part of the business model. In 1999 he pitched to his business partners, “We’d automate the site so customers could learn online for free, make educated decisions, and then buy from us, at any time of the day and from anywhere in the world.”

Early on, feedback made it clear that customers wanted in-person learning as well. The Midwest Renewable Energy Association (MREA) and Solar Energy International (SEI) were already well-known for their classes – and for being a long way from the New England. altE met demand in the Northeast by offering introductory classes in its Worcester, Massachusetts office. Sascha himself taught the first class in 2004. 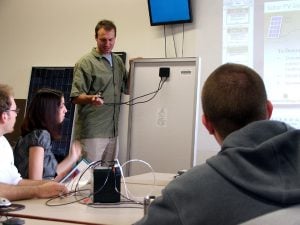 altE’s first classes were meant for homeowners, looking to learn about solar. Most students were thinking about buying a solar power system, and maybe installing and maintaining it themselves. As altE became more connected with the demand for education, it made sense to create a new division.

The altE Learning Center was officially founded in March 30, 2007. Its stated goals were to:

In coming months, the Learning Center started offering more and more classes. This is how Amy Beaudet, the future Solar Queen, found out about altE. She recalls, “I came to one of the homeowner classes in 2007, and after one class I told the instructor ‘Hey you should hire me.’ And I got an interview from that class, and they did!”

In 2008, altE released a webinar series on the basics of renewable energy, solar air heating, and solar electricity. Previews of these classes are still available on YouTube. Many of these videos were updated and adapted for re-release in 2014.

As demand for education grew, so too did the curriculum. altE was offering classes at its headquarters in Hudson, Massachusetts, as well as online seminars, articles, and videos. The situation called for a separate branch, dedicated to teaching renewable energy skills…

The brainchild of CEO Sascha Deri and Senior Technical Sales Representative Ben Farmer, altE U became fully fledged in late May, 2009. In that month the nascent solar training program became the first program on the Northeast to earn an Institute for Sustainable Power Quality (ISPQ) Training Program accreditation, from the Interstate Renewable Energy Council (IREC). This meant that new students in the industry could earn an Entry Level Certificate of Knowledge from the The North American Board of Certified Energy Practitioners (NABCEP), through altE.

The mission of AltE U, was to “provide high quality, up-to-date training and information in a timely and effective manner to meet the growing need for qualified renewable energy installation professionals.” 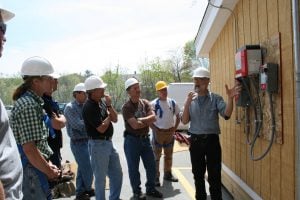 At its height altE U offered 100, 200, and 300-level courses. Subjects included Photovoltaics (PV), Solar Thermal, Solar Air Heating, and Wind Power. Nine instructors taught eleven classes, each with instructional and lab components. Classes were taught in both Massachusetts and a satellite office in Ohio. 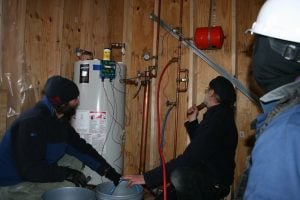 Some of the 300-level classes were taught by experts from MREI, Chris LaForge and Bob Ramlow from MREA. The other instructors were all altE Technical Sales Reps (TSR’s), most of whom taught the PV classes. Amy Beaudet, then a TSR, recalls, “I learned so much from Bob Ramlow. I started out taking his solar thermal classes, then I was his assistant during the class, and then I taught his class.”

“We were really proud of the classes. We made a point of having a lot of classroom time, and a lot of hands-on time. No demos – the students would actually do an install. For the PV classes they did a grid-tied and an off-grid install. One year we installed a system up on the roof of our Hudson office (the building was four stories), and then we got a shed built out back in the parking lot, and did an install on the shed. That was much easier.

“For my classes, Solar Thermal, we did both drainback and pressurized solar water heating systems. We had a bunch of labs. Depending on the class we would use a Solar Pathfinder. In all the courses, we’d really guide you through the whole process. Analysis, site eval, sizing your system, and physical installation.” 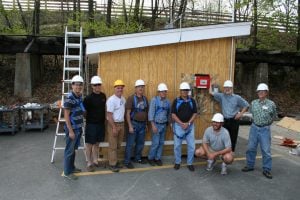 altE U had made a name for itself. New courses were being added, and old ones improved, almost constantly. Students often had to be turned away to keep class sizes manageable, so there were plans to expand further. Revenues from the “U” offset the losses from occasionally pulling Technical Sales Reps away from selling to teach. What, you may ask, could possibly go wrong?

You may be thinking “But the Great Recession began in 2007, right about the time altE created its Learning Center, and ended in 2009, around the time altE U got accredited by IREC, and had lasting global effects while the University saw rapid growth!” Quite right.

While the recession was certainly tragic, clearly it did not hamper altE U to an insurmountable degree. Ironically, altE U was killed by the American Recovery and Reinvestment Act of 2009 (ARRA). Sometimes called the “Stimulus Package,” Title VIII of this law provisioned for “…a program of competitive grants for worker training and placement in high growth and emerging industry sectors…for research, labor exchange and job training projects that prepare workers for careers in energy efficiency and renewable energy…”

A summary of the bill clarifies, ARRA “…Authorizes the Secretary of Labor to award: (1) Community College and Career Training Grants to institutions of higher education to develop educational or career training programs for adversely affected workers…” 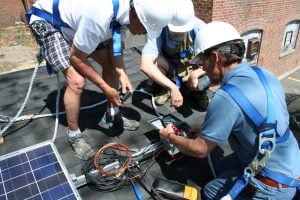 Because altE U was not an actual university, it did not qualify to apply for the grant money. Soon colleges across the country were creating job retraining programs for renewable energy. The grant money let them offer courses at a price point with which altE U could not compete.

altE U went from having to turn students away, to having to cancel classes because only one or two students would sign up. It was hard to be bitter, as the cause of the program’s downfall was a really good thing for renewable energy. Generally it was good for altE too – focusing on the DIY homeowner and installer markets has helped the company double its revenue in the last 8 years.

The U shut down in 2012. Unfortunately, two instructors ultimately left altE to find work elsewhere. Without courses to teach, the rest of altE’s technical sales reps returned to focusing on a single job each day – which they all agreed was less stressful. Most importantly, altE U’s mission statement was, and is to this day, being realized on an unprecedented scale, even if the altE team was no longer central to the effort.

You can still find traces of altE U, like this June 2009 newsletter and the YouTube videos mentioned above. Much of altE U’s educational content has been rolled into the Resources section of our main website. Amy’s extensive work on our YouTube channel, and answering questions on social media, are in part a legacy of “the U.”

Talking to the Technical Sales Reps who were a part of altE U, you can tell they are especially proud of their efforts and accomplishments during that time. Their passion for “Making Renewable Do-able,” helped altE pioneer renewable energy education in the Eastern US.