In August of this year altE acquired Real Goods, the original purveyor of off-grid living supplies. altE’s founding CEO, Sascha Deri, commented, “As a teenager I remember reading the Real Goods catalog and Solar Living Sourcebook and being inspired by them.” What about Real Goods made it so inspiring?

Before he founded Real Goods, John Schaeffer graduated from UC Berkeley in 1971. Soon after, he and some friends bought land in Mendocino County and started a back-to-the-land commune. In 1977, John took a job in Ukiah, 35 miles away, as a computer operator. Also in Ukiah, John frequented 12 different stores, purchasing kerosene lamps, irrigation pipe, fertilizer, and more on behalf of the commune. Pretty quickly he got the idea to create a store – a one-stop-shop for off-grid living.

As the idea percolated, John considered the prevalence of kerosene in off-grid living. At the time there weren’t many options for off-grid energy storage. Some people nearby started to experiment with wind turbines, and John set up his own. Shortly after he got a 12-volt battery. He started using the turbine to charge the battery, and the battery to power various 12-volt appliances.

Many in the commune sought to minimize their reliance on electricity, but to John it wasn’t just about the commune. Humanity’s reliance on fossil fuels needed a drastic reduction. In order for that to happen, someone needed to start selling dependable and affordable Renewable Energy systems. Besides, folks on the commune liked SNL as much as anyone else – they just preferred to watch it using clean energy. 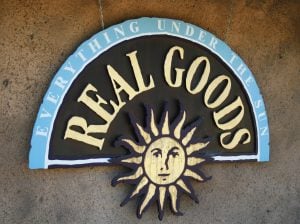 Then 29 years old, John opened his first retail store in Willits CA. The store did a million dollars in sales in its first year. In addition to the normal off-grid living supplies, the store sold components for off-grid power systems.

In 1979, someone came into the store looking to sell solar panels – rejects from the space program. John turned them around, making the first commercial sale of a solar panel in the US.The nine-watt PV panels went for roughly $900, or about $100 per watt. Compare that to the modern retail prices of less than $1 per watt!

John drew inspiration from Stewart Brand’s Whole Earth Catalog, which was published quarterly from 1968 and 1971, then less frequently through 1998. This back-to-the-land publication was full of op-eds, how-to guides, and ads for off-grid products.

With the help of Jim Cullen, author of Wilderness Home Power System and How to Do It (‘79), John created the Solar Living Sourcebook. The book has seen 14 editions over 36 years. The latest edition has a new section on Urban homesteading. The Solar Living Sourcebook became the definitive resource for off-the-grid living, renewable energy, green building, homesteading, and all things sustainable. To date over 700,000 copies have been sold in 44 English-speaking countries.

The Solar Living Sourcebook is printed on Forest Stewardship Council-certified acid-free paper that is 100% post-consumer recycled (100% old growth forest-free), processed chlorine free, and printed with vegetable-based, low-VOC
inks, with covers produced using FSC-certified stock. It may have the lowest environmental impact of any paper book in print today!

By 1985 Real Goods had expanded to three locations, Willits, Ukiah, and Santa Rosa. John sold the company and retired early, but when the company went bankrupt six months later he came back. With all the stores closed, all that remained was a mailing list of 2,000 customers.

With his last $3,000 John re-started Real Goods as a mail-order business out of his home. The first catalog was just 16 pages. 95% of the customers lived off-grid. The first year’s sales were about $29,000, and growth was steady in the years that followed. The last Mail-Order catalog became an email newsletter in the fall of 2015. 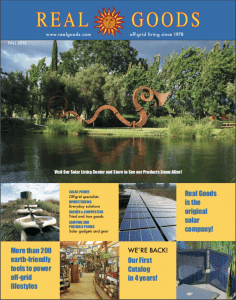 Cover of the most recent Real Goods Mail-Order Catalog

Seeking to raise awareness of our dependence on the industrial power grid, Real Goods declared August 9, 1992 a national Off-the-Grid Day. The first day drew limited participation across northern California. Eventually this event morphed into the National

Tour of Independent Homes, which was donated and is now the National Solar Tour run by the American Solar Energy Society (ASES).

Around this time, at a meeting of the Solar Energy Expo and Rally (SEER), John Schaeffer led the drafting of the “Declaration of Energy Independence.” In less than a year, Real Goods collected 10,000 signed copies of the declaration. In 1992, Governor Jerry Brown – then a presidential candidate – delivered the signed copies to the White House in an electric car.

In 1990, Real Goods made it a business goal to prevent the production of a billion pounds of C02 by 2000. The figure was to be calculated by estimating the kWh savings from sales of energy-saving products. Each Real Goods catalog contained an update on their progress. Real Goods met the billion-pound goal in 1997, two and a half years ahead of schedule!

In 2007, Real Goods set the same goal of a billion-pound reduction in C02 emissions. With a fully developed web presence, they met the goal within three years.

The irony wasn’t lost on John that Real Goods was operating out of a normal office, totally on the grid. In the early nineties he decided to do something about it. In 1993, construction started in the Solar Living Center, a 12-acre sustainable living demonstration site. 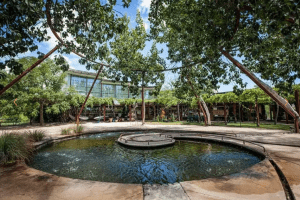 View of the main building in the Solar Living Center, from the Solar Calendar

What was essentially a ‘brown field’ became a permaculture paradise, demonstrating all the sustainable practices known. SLC remains the largest straw-bale commercial building in the world.  In 1993, some of the first EV charging stations were installed in the gravel parking lot. In addition to seeing nearly 300,000 visitors each year, and demonstrating a wide variety of off-grid living techniques, SLC is the home of the Solar Living Institute, a 501(c)(3) educational organization offering NABCEP-approved classes in sustainable living and renewable energy.

Real Goods has been around from the start of modern environmentalism. Their history and extensive influence has shaped and inspired the Renewable Energy landscape, especially among DIY homesteaders and off-gridders. Their goals, from sweeping gestures like declaring a national day of awareness, to setting sales goals based on their positive environmental impact, have proven not just visionary, but effective. altE is proud to join forces with the people of Real Goods, empowering customers and bringing the world closer to clean power.