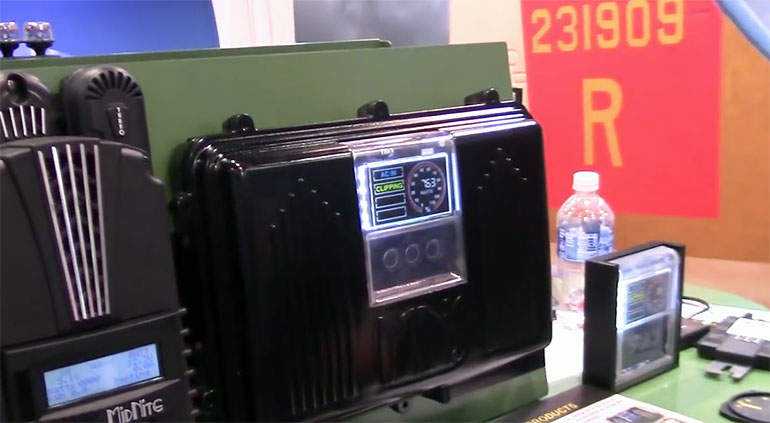 Andrea: We’re with Robin from Midnite Solar, and we have a bunch of fascinating new products. This is one of them, your new grid-tie inverter. Can you tell us a little bit about it, Robin?

Robin: This is the MNGTI-750 Wind. Wind because it’s designed to work with wind turbines, which we are also coming out with. This one we call Andy’s inverter, Andy was the engineer who designed this. You’ll notice on the faceplate, it’s got a very unique type of display. It looks like the speedometer of a car. Right now it’s showing you it’s over-temp because because it’s over its rating. Now it applied the brake, it shut down the turbine, and it stopped. Now it’s going to start all over again. So what that’s telling you is it has a built in Clipper, so it doesn’t allow the turbine to overspeed. It doesn’t allow the inverter to overheat.

Inside, we have capacitive touch buttons, so there’s no holes through the case. This is a NEMA-3R rain proof case. This is what we call our solar safety module, so we will have not only the wind turbine grid-tie inverter, but in the same exact case, we have solar inversion, and that will take 3 to 4 solar panels.

And the third version, that’s in the same exact case, is a battery-based 1000W grid-tieable inverter, that will AC Couple to both the solar and the wind turbine inverters. So, basically this inverter system is designed for a market that doesn’t really exist. It’s the do-it-yourselfers, a lot of your customers are the do-it-yourselfers. And they’ve been forced to go to eBay and Amazon and buy Chinese stuff that has no agency approvals, it doesn’t really work together. I call this the Lionell Train set. You can go buy the solar inverter first, and then a few solar panels, and now you are grid-tied. Oh and by the way, this has Bluetooth on it also, so you can talk to your Android cell phone. Anyway, you can start with a simple, inexpensive grid-tie inverter for solar, then you go back later and maybe you buy a wind turbine inverter. And that’s also selling power back to the grid. Then you go back later, and you want power backup now for when the utility goes down, so you buy the battery-based version. You’ve got three nice little inverters on the wall. And now you want to backup even more stuff, you add another battery-based inverter. They are stackable, so now you have a 2000W inverter. That’s why I call it the Lionell Train set. You have to keep on going back and buying more tracks, more cars, more trains.

Andrea: As always, Midnite Solar ahead of the curve, setting the standard for new products like this. Thank you Robin.