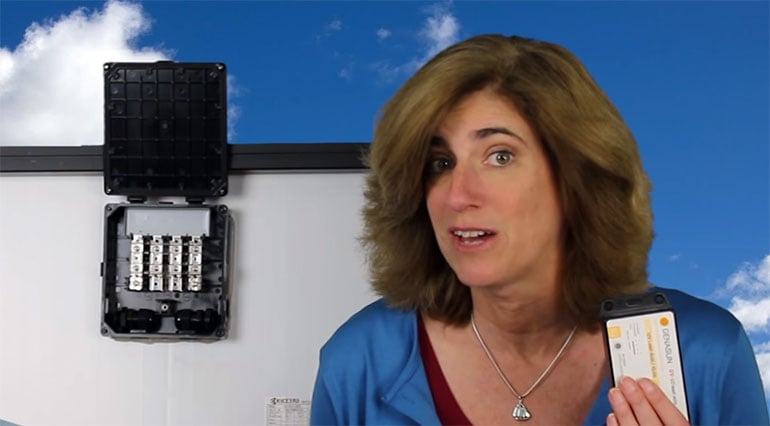 What is a diode?

A diode is designed to let current flow in one direction. If you’re familiar with plumbing, a diode is the electrical equivalent to a check valve. There are two purposes of diodes in a solar power system – bypass diodes and blocking diodes. The same type of diode is generally used for both, a Schottky barrier diode, but how they are wired and what they do is what makes them different.

Bypass diodes are used to reduce the power loss solar panels experience due to shading. Because current flows from high to low voltage, when a solar panel has cells that are partially shaded, the current is then forced through the low-voltage shaded cells. This causes the solar panel to heat up, and have severe power loss. Those shaded solar cells become consumers of electricity instead of producers.

Bypass diodes inside the junction box of a solar panel provide a low resistance path for the current to go around a series of solar cells that have been shaded. The diode is wired in parallel with the cells. Because electricity takes the path of least resistance, it is easier for the current to go through the diode than through the shaded cell, so it does. This minimizes the heat gain, and reduces current loss.

Most solar panels have bypass diodes built in these days, so you typically won’t have to worry about that anymore. However, if you have multiple solar panels wired together in series, and you consistently have shading on one or more of the solar panels, wiring a bypass diode in parallel across the shaded panel can prevent the current from being forced back through the shaded panel and cause it to heat and lose power. So, it acts the same as the internal bypass diodes, but bypasses the entire panel instead of the individual cells.

There may be, however, some instances when a blocking diode can still be helpful. Watch our video below to learn more.