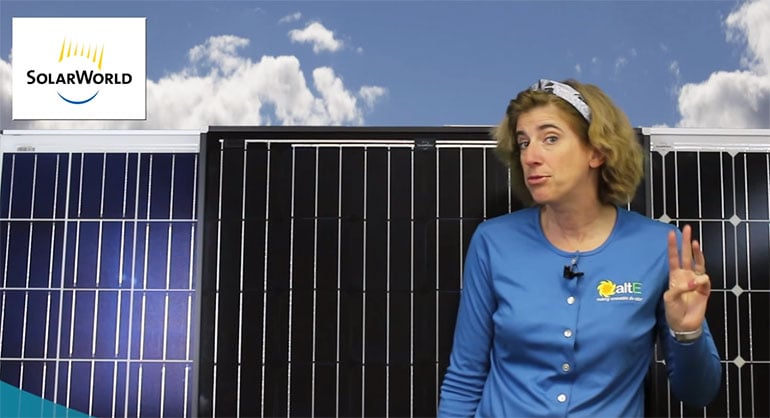 Fact #1
SolarWorld has been manufacturing solar panels in the US for more than 40 years! Since 1975 to be exact. The same year that BIC invented disposable razors, Sony introduced Betamax videotapes, and ‘One Flew Over The Cuckoo’s Nest’ won the Oscar for Best Picture.

Fact #2
SolarWorld’s solar panels are really strong. Their version 4 frame provides increased load ratings, reduces the impact of scratches and drains water faster. As a result, you can mount the solar panels in any orientation, portrait or landscape, and they can withstand a static load of up to 113lbs per square foot.

SolarWorld voluntarily puts their panels through extreme tests that go far beyond what is required by international standards. They test for hail, salt spray, snow and wind load. They repeatedly drop a 99-pound, lead-filled sack from a height of four feet onto the middle of vertically positioned solar panels.

They put their solar panels through extreme temperature fluctuations, as well, in order to emulate 25 years of weather changes. In the climate chamber, they cycle from -40 degrees to 185 degrees Fahrenheit – not just the for the required 200 cycles, but 9,125 cycles!

Fact #3
SolarWorld “plus” sorts each solar panel off the assembly line. What that means is every single panel gets tested under standard test conditions. They get sorted in 5 watt increments, always rounded down. So, if a panel measures at 264 watts, it will go into the 260 watt bin, it doesn’t round up to 265 watts. If it is 269 watts, then it goes into the 265 bin. So, you are guaranteed to get at least the rated wattage, not plus or minus, only plus or equal to.

SolarWorld solar panels come standard with a 25 year linear power performance guarantee. This guarantees that for 24 years, the panels will not lose more than 0.7% of their rated power output a year, and after 25 years, still output at least 82% of their initial power. Even after the first 25 years, the solar panels will continue producing solar power for decades.