Why Point Solar Panels at the Sun? 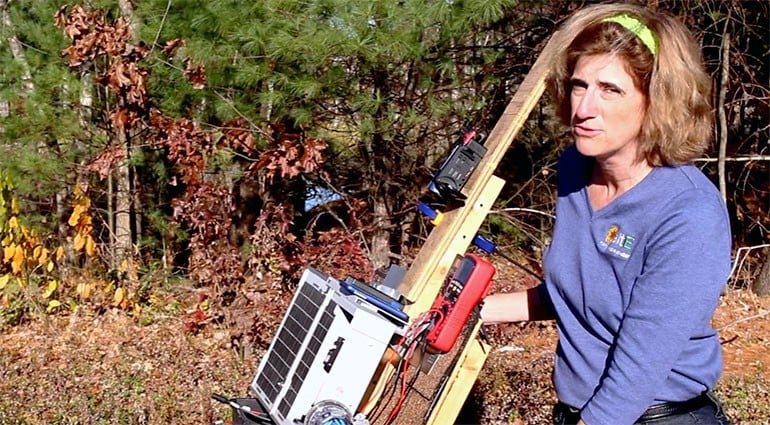 In the demo below, we show what happens when you point solar panels at different angles from the sun.

So what I’ve got here is one solar panel, it’s a 5W 12V panel, and I’m measuring the amps – how much current is flowing through the solar panel. I’m at .47 amps, and I’m pointing right at the sun. I’m at a pretty steep angle because it’s November and the sun is fairly low. I’m really pointing right at it. So, you can actually see from my meter that I’m reading 864 watts per square meter. That’s very close to the 1000 watts per square meter that is Standard Test Conditions.

Now here’s an interesting thing. If I switch over and show volts, I’m still at 17.2V. It really didn’t affect my voltage very much, but it killed my current. And since watts equals volts times amps, if you cut the amps, you’re going to be just killing your wattage output. Just really a demonstration of why it’s so important to point the solar panels at the sun.

Now I’m back to the sun, 844 watts per square meter, and I’m at 19.4V, and .46 amps. Now, I know, the sun moves across the sky throughout the day, so this is why in the northern hemisphere, you want to point your solar panels south, because that’s going to have the most amount of time with the sun pointing right at the panels. If you are in the southern hemisphere, you’re going to pointing it north. You want to point it towards the equator. You want to point it south, now that’s true south, not magnetic south. You want to point right at the equator, so that the panels are facing the sun as long as possible. Alright, so I’ve just stressed point at the equator, point at the equator, point at the equator! But what if you can’t? Well, if you’ve got the ability to do half of your array to the east, and half of your array to the west, then you can have an east/west system, where in the morning your east panels will get most of the sun, and because they are going to be pointing right with the sun in the morning, and the western array will be able to get the power in the afternoon. So that will give you a better situation than having them all facing the wrong direction throughout the whole day. Now you want to make sure that you have them wired up separately. You don’t want to wire your east panels and your west panels together, you want them to operate independent of each other.