How do I read the solar panel specifications? 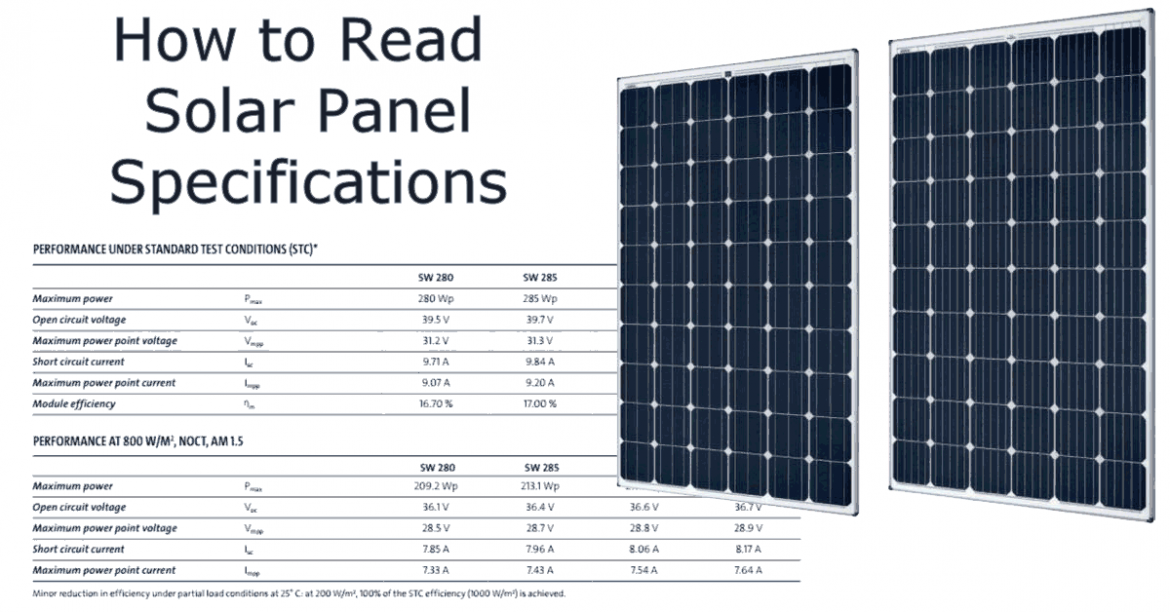 There are several terms and ratings that are associated with a solar panel’s data sheet. Figuring out what means what for the specs can get pretty confusing. We are going to explain each of them to help clear it up.

STC is the set of criteria that a solar panel is tested at. Since voltage and current change based on temperature and intensity of light, among other criteria, all solar panels are tested to the same standard test conditions. This includes the cells’ temperature of 25℃ (77℉), light intensity of 1000 watts per square meter, which is basically the sun at noon, and the atmospheric density of 1.5, or the sun’s angle directly perpendicular to the solar panel at 500 feet above sea level.

I don’t know about you, but I’ve been on a roof in the summer, and I can assure you, the solar panel cells are not 77℉. They heat up much hotter than that in the sun, well over 100℉.

NOCT takes a more realist view of actual real world conditions, and gives you power ratings that you will likely actually see from your solar system. Instead of 1000 watts per square meter, it uses 800 watts per square meter, which is closer to a mostly sunny day with scattered clouds. It uses an air temperature of 20℃ (68℉), not a solar cell temperature, and includes a 2.24MPH wind cooling the back of a ground mounted solar panel (more common in larger solar fields than a roof mounted residential array). These ratings will be lower than STC, but more realistic.

Rated output for solar panels at different light intensities (W/m2). The “knee” of the curves is where the most power is produced, and the voltage & current is optimized.

Open circuit voltage is how many volts the solar panel outputs with no load on it. If you just measure with a voltmeter across the plus and minus leads, you will read Voc. Since the solar panel isn’t connected to anything, there is no load on it, and it is producing no current.

This is a very important number, as it is the maximum voltage that the solar panel can produce under standard test conditions, so this is the number to use when determining how many solar panels you can wire in series going into your inverter or charge controller.

Voc will potentially be briefly produced in the morning when the sun first comes up and the panels are at their coolest, but the connected electronics haven’t woken up out of sleep mode yet.

Remember, fuses and breakers protect wires against over-current, not over-voltage. So, if you put too much voltage into most electronics, you will damage them.

Short Circuit Current  is how many amps (i.e. current) the solar panels are producing when not connected to a load but when the plus and minus of the panels wires are directly connected to each other. If you just measure with an ammeter across the plus and minus leads, you will read Isc. This is the highest current the solar panels will produce under standard test conditions.

When determining how many amps a connected device can handle, like a solar charge controller or inverter, the Isc is used, generally multiplied by 1.25 for National Electrical Code (NEC) 80% requirements.

The Pmax is the sweet spot of the solar panel power output, located at the “knee” of the curves in the graph above. It is where the combination of the volts and amps results in the highest wattage (Volts x Amps = Watts).

When you use a Maximum Power Point Tracking MPPT) charge controller or inverter, this is the point that the MPPT electronics tries to keep the volts and amps at to maximize the power output. The wattage that a solar panel is listed as is the Pmax where Pmax = Vmpp x Impp (see below).

The Vmpp is the voltage when the power output is the greatest. It is the actual voltage you want to see when it is connected to the MPPT solar equipment (like an MPPT solar charge controller or a grid-tie inverter) under standard test conditions.

The Impp is the current (amps) when the power output is the greatest. It is the actual amperage you want to see when it is connected to the MPPT solar equipment under standard test conditions. Nominal voltages let people know what equipment goes together. They are like Geranimals® where you match the animals on the clothes labels to match the outfit (Editor’s note: most of us here at altE have no idea what the Geranimals® are that Amy is referring to but we’re hoping you guys can piece together what she’s putting down).

A 12V solar panel is used with a 12V charge controller, a 12V battery bank, and a 12V inverter. You can make a 24V solar array by wiring two 12V solar panels together in series. 12V panels are common, like the Kyocera 145W and some manufacturers such as Canadian Solar and SolarWorld are making 24V panels.

It starts to get tricky when you move away from battery based solar systems, and the 12V increments are no longer necessary. Grid tie solar panels with 60 cells are often referred to as 20V nominal panels, like the SolarWorld SunModule 290W solar panel. A 20V nominal solar panel goes through an MPPT solar charge controller so it can efficiently charge a 12V battery.

Above: Approximate voltages to determine nominal voltage of solar panels.

Now you can read the label of a solar panel and figure out what each of the specs are. Stay tuned and we’ll have an upcoming blog post on how these specs all come together. We’ll go over an example of how to size a system with the details.