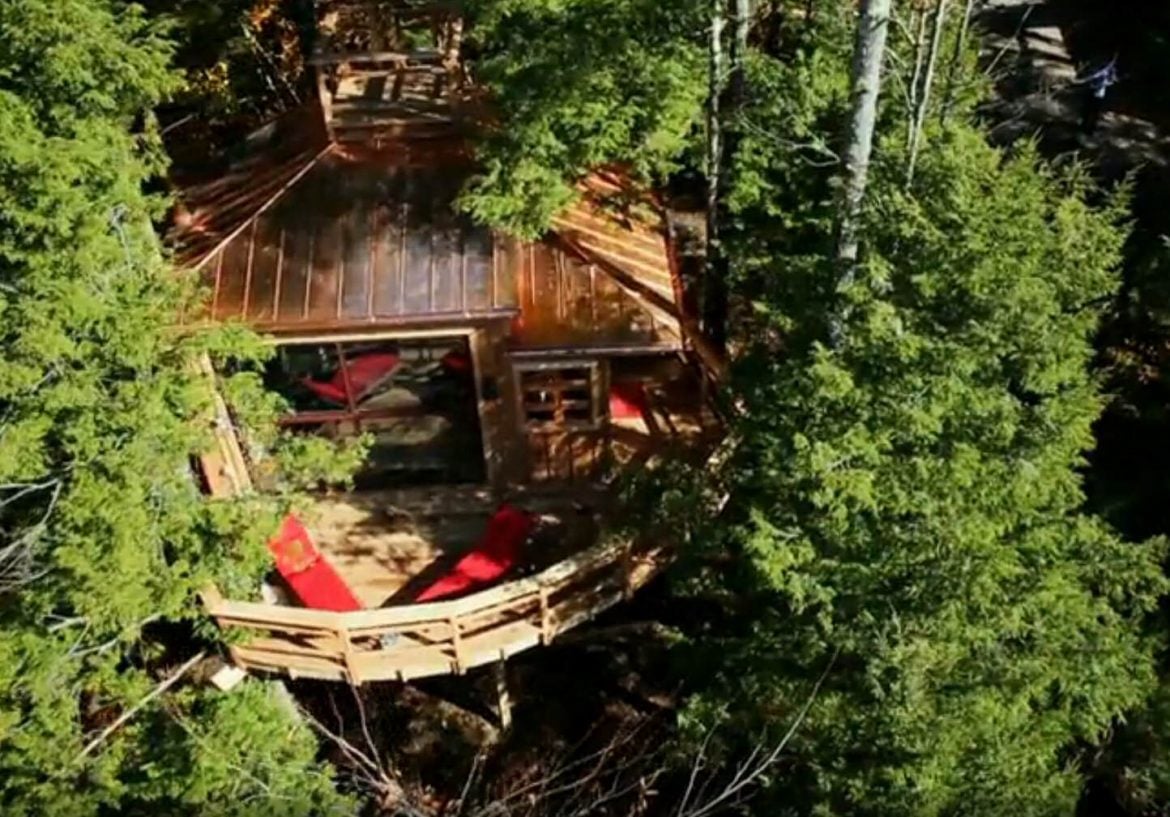 When you think of ideal places for solar powered treehouses, where do you imagine? Washington State and Olympic National Park? Perhaps California and their mighty Sequoia or Redwoods? Certainly not central Maine!  But that is where our customer Rob decided to build his dream treehouse. Using a small solar power system (and a lot of wood!), he is able to live off grid and (almost) totally generator-noise free.

Walking Up to the Solar Treehouse

Coming up on Rob’s property, you can see a mixing of the old and the new. The the first thing you see is his root cellar/ice house, complete with the beer taps on the outside. At the entrance to the main property is the closet where his solar system is stored, as well as the two Canadian Solar 260 Watt Solar panels and two SolarWorld 260 Watt panels added later. The solar panels are mounted on an IronRidge rail system with tilt legs in order to adjust his array to capture more sun as the seasons change. Looking onto the back of Canadian Solar panels on Rob’s treehouse. All of this currently serves all Rob’s power needs, although he is looking to add two more panels to allow for more flexibility in managing his loads. Rob’s main building is a beautiful hardwood yurt. Inside the treehouse Rob has the Xantrex Link Lite Battery Monitor hooked up next to his DC breakers. These breakers double as switches, and the battery monitor gives him the ability to keep an eye on the solar system remotely from inside the yurt. Stepping outside the yurt, you see a beautiful elevated walkway with DC lights underneath to allow for good lighting.

Coming around a bend, is the treehouse itself – a one-room structure that will function as the master bedroom with an attached composting outhouse.

Inside the mud room, you will find the Samlex Remote Control, that allows Rob to turn the inverter on and off as needed, as well as view the battery voltage from the comfort of the treehouse.

The main room itself has a stove for heating (although Rob is considering a pellet stove to provide greater heat), along with the master bed.

A Hangar with a View View out of the hangar windows and deck of the Maine solar powered treehouse.

Capping off this truly spectacular view, is the glass hangar door – able to open fully, allowing Rob to move the bed to sleep out under the stars at night, while the solar powered lights in the trees glow around him. His Schneider SW 4024 provides enough 240V power to operate the lift that raises the hangar door.

When you see the view from his crow’s nest, you have to agree – having a solar powered treehouse in Maine is pretty awesome. View out the back deck from Rob’s treehouse.