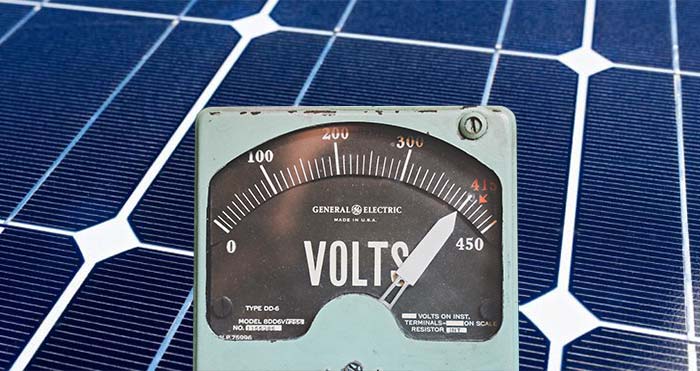 Unlock the mysteries behind the jargon and acronyms of voltage!

For folks that are new to photovoltaics (PV), unlocking the mysteries behind the jargon and acronyms is one of the most difficult early tasks. Regarding voltage, solar panels (PV modules) have many different voltage figures associated with them. We’ll start with the easy ones and go on from there. In this article, you’ll learn about:

Voltage at open circuit is the voltage that is read with a voltmeter or multimeter when the module is not connected to any load. You would expect to see this number listed on a PV module’s specification sheet and sticker.

This voltage is used when testing modules fresh out of the box and used later when doing temperature-corrected VOC calculations in system design. You can reference the chart below to find typical VOC values for different types of crystalline PV modules.

Voltage at maximum power is the voltage that occurs when the module is connected to a load and is operating at its peak performance output under standard test conditions (STC). You would expect to see this number listed on a modules specification sheet and sticker. VMP is at the place of the bend on an I-V curve; where the greatest power output of the module is. 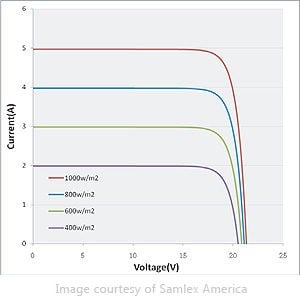 It is important to note that this voltage is not easily measured, and is also not related to system performance per se. It is not uncommon for a load or a battery bank to draw down the VMP of a module or array to a few volts lower than VMP while the system is in operation.

The rated wattage of a PV module can be confirmed in calculations by multiplying the VMP of the module by the current at max power (IMP). The result should give you [email protected] or power at the maximum power point, the same as the module’s nameplate wattage.

The VMP of a module generally works out to be 0.5 volts per cell connected in series within the module. You can reference the chart to find typical VMP values for different types of crystalline modules.

Nominal voltage is the voltage that is used as a classification method, as a carry-over from the days when battery systems were the only things going. You would NOT expect to see this number listed on a PV module’s specification sheet and sticker. This nomenclature worked really well because most systems had 12V or 24V battery banks. When you had a 12V battery to charge you would use a 12V module, end of story. The same held true with 24V systems.

Because charging was the only game in town, the needs of the batteries dictated how many cells inside the PV should be wired in series and or parallel, so that under most weather conditions the solar modules would work to charge the battery(s).

If you reference the chart, you can see that 12V modules generally had 36 cells wired in series, which over the years was found to be the optimum number for reliable charging of 12V batteries. It stands to reason that a 24V system would see the numbers double, and it holds true in the chart. Everything worked really well in this off grid solar system as the and evolved along the same nomenclature so that when you had a 12V battery and you wanted solar power, you knew you had to get a “12V” module and a “12V” controller.

Even though the voltage from the solar module could be at 17VDC, and the charge controller would be charging at 14V, while the inverter was running happily at 13VDC input, the whole system was made up of 12V “nominal” components so that it would all work together. This worked well for a good while until maximum power point technology (MPPT) became available and started popping up.

This meant that not all PV was necessarily charging batteries and that as MPPT technology evolved, even when PV was used in charging batteries, you were no longer required to use the same nominal voltage as your battery bank.

String inverters changed the game for modules, as they were no longer forced in their design to be beholden to the voltage needs of deep cycle batteries. This shift allowed manufacturers to make modules based on physical size, wattage characteristics, and use other materials that produced module voltages completely unrelated to batteries.

The first and most popular change occurred in what are now generally called 18V “nominal” modules. There are no 18V battery banks for RE systems. The modules acquired this name because their cell count and functional voltage ratings put them right in between the two existing categories of 12V and 24V “nominal” PV modules. Many modules followed with 48 to 60 cells, that produced voltages that were not a direct match for 12V or 24V nominal system components.

To avoid bad system design and confusion, the 18V moniker was adopted by many in the industry but ultimately may have created more confusion among novices that did not understand the relationship between cells in series, VOC, VMP, and nominal voltage. With this understanding, things get a lot easier, and the chart should help to unlock some of the mystery.

The temperature-corrected VOC value is required to ensure that when cold temperatures raise the VOC of an array, other connected equipment like MPPT controllers or grid tie inverters are not damaged. This calculation is done in one of two ways. The first way involves using the chart in NEC 690.7. The second way involves doing calculations with the Temperature Coefficient of Voltage and the coldest local temperature.

This value represents the change in voltage based on temperature. Generally, it is used to calculate Cold Temp/Higher Voltage situations for array and component selection in cooler climates. This value may be presented as a percentage change from STC voltages per degree or as a voltage value change per degree temp change. This information was not easily found in the past, but is now more commonly seen on spec pages and sometimes module stickers.

Voltages can be read on a PV module with the use of a voltmeter or multimeter. What you’ll see below is an example of a voltmeter measuring VOC with a junction box. This would be the view from the back of the PV module.