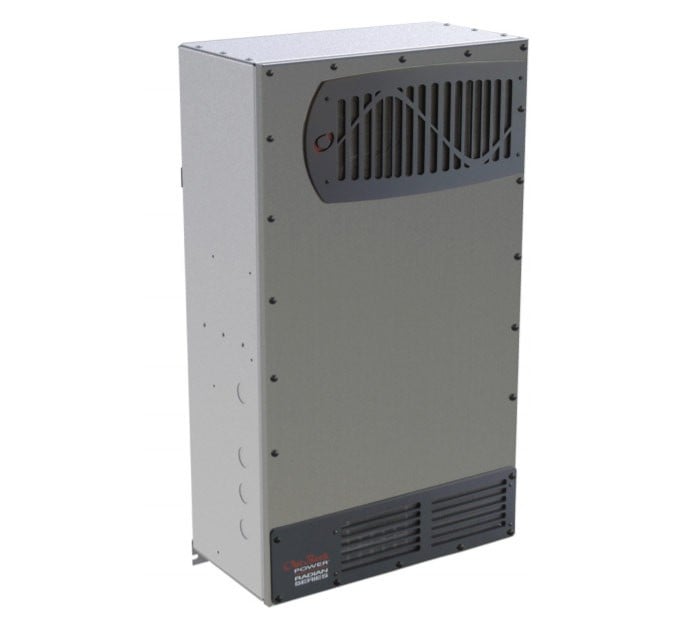 Learn what inverters are and how they are used in a solar power system.

An inverter is a device that converts battery power (DC) into alternating current (AC) of a higher voltage. This means that most inverters are installed and used in conjunction with a battery bank of some sort – a common set up in off-grid solar installations.

Deep cycle batteries are the heart of an off-grid inverter-powered electrical system, storing power for use on demand. The most basic way to draw electrical power from a battery is direct current (DC) at the nominal voltage of the battery. Your car radio, for example, uses 12 volts DC (12V DC), the same voltage as your car battery.

Many off-grid electrical systems (those not powered by electricity from a utility company) use 12-volt DC power to run simple loads such as lights. (Any consumption of electrical power is called a load.) Such systems are commonly referred to as low-voltage DC systems. Powered by a 12-volt DC system, you can enjoy the benefits of electric lights, entertainment systems, laptop computers, and other devices that can be operated off a car battery.

However, you can’t run power tools, kitchen appliances, or office machines, without the help of some device that generates “household” electricity – or AC current. In North America, 120 volts alternating current (120 VAC) is the standard. In many countries 230 Volts AC 50Hz is the norm.

To run your standard appliances, one alternative is an engine-powered generator. Fire it up and as long as it is running (noisily), you can use your appliances and tools. But as soon as you turn it off – or it runs out of fuel – the electricity stops.

Another alternative is to produce 120/230 V AC from the batteries using an inverter. Using an inverter you will convert battery power (DC) into alternating current (AC) of a higher voltage. DC-to-AC inverters have been around for a long time. Energy loss in this conversion process at first was very high: the average efficiency of early inverters hovered around 60%. In other words, you would have to draw 100 Watts of battery power to run a 60-Watt bulb.

A new way to build inverters was introduced in the early 1980s. These fully solid state inverters boosted efficiency to 90%. Trace Engineering helped to pioneer this technology. Their first model, the DR1512, was introduced in 1984, and thousands of their “firstborn” are still going strong in every corner of the globe.

The key to the reliability of Trace inverters are the elegance of their design (Trace was later acquired by Xantrex, who was then purchased by Schneider Electric).

They use a sophisticated Field Effect Transistor (FET) circuitry to convert the batteries’ DC voltage (usually 12 or 24V DC) into AC. The resulting low voltage AC is then transformed into a higher voltage, usually 120 or 220V AC. All of the power shaping – conversion to AC – and waveform shaping takes place on the low voltage side of the transformer.

One note of caution: when connected to an electrical grid, it’s easy to be casual about electrical consumption. As long as you can afford it, the thinking goes, the utility company probably won’t run out of power. With a battery, however, the quantity of electrical power is finite. You need to calculate and monitor your electrical consumption if you don’t want to run the battery(s) down.