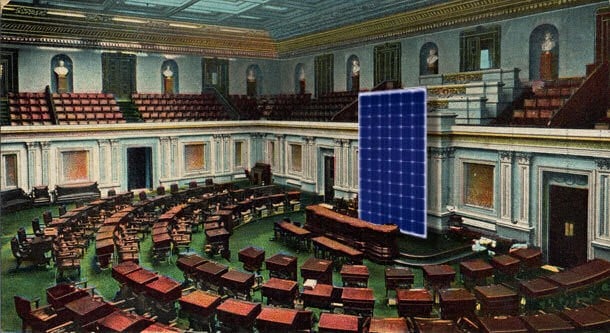 You’ve probably already heard that the 30% solar ITC (Investment Tax Credit) was extended with the passing of the 2015 Omnibus Spending Bill, as well as not blocking the $500M that the US committed to send to the UN Green Climate Fund as part of the Paris Climate Conference, COP21. But with this being politics, nothing is for free. In exchange, the bill lifts the 40 year old ban on US oil exports. Here’s a few thoughts we have on the subject. As I’m sure you can imagine, we at the altE Store are very happy about the ITC extension for solar and wind. The US solar industry has been making tremendous gains, catching up with Europe and Asia after the 25 year delay due to the last time the solar incentives were pulled from a burgeoning market in 1986.

Removing the tax credit just as solar is becoming more affordable to all runs the risk of setting the industry back once again. We certainly agree that solar must eventually be able to stand on its own feet without government help, though we also believe after a 100 years+ the oil industry is mature enough that it is ready to stand on its own and no longer rely upon its $4.8 Billion in annual subsidies. But as the economy is finally starting to recover, and hundreds of thousands of good US jobs are a result of a strong solar industry, now is not the time to throw obstacles in the way.

Bloomberg New Energy Finance solar projections with and without the ITC extension. From 2012 to 2016, an extra 18GW (that’s giga watts, with a G!) of solar is expected to be installed with the solar ITC. Bloomberg’s forecast of the installation of solar power systems from 2011 to 2021 with the federal tax credit. Bloomberg’s forecast for US Solar Power installations installed without the federal tax credit.

So, what about the oil exports? First a little background for those not familiar with the history of US oil. Why would US oil companies want to export crude oil, when we as a country are a net oil importer? There are a few reasons. Due to the newer fracking techniques, US oil tends to be a thinner grade of oil than Canadian, Venezuelan, and other foreign oil. Most US refineries are designed to process the thicker oil. As a result, it became difficult to find refineries to process the crude, which in turn caused the prices for the crude to drop.

Also, the US has price controls on oil, and by selling the crude to foreign countries with high demand for oil, any type of petroleum oil, they can bypass the restrictions and get higher prices, driving the prices back up.

Was it worth it?

So the trillion dollar question is, was it a good trade? Obviously, time will tell. But at least for now, while the oil prices are so low, there doesn’t seem to be an immediate urge by oil producers to export much crude oil. This deal was more about laying the foundation for the future. This situation may change in the coming few years, but for now, a deal that increases solar production by 13GW over 6 years, saves the CO2 equivalent of 50 million tons of coal burned for electricity, according to the EPA green house gas calculator.

However, to look at that in terms of oil, that is equivalent to 219 million barrels of oil consumed. The EPA says that in 2014, the US produced an average of 28 million barrels of crude oil A DAY.  So the CO2 emissions eliminated by the extra solar installed by the ITC extension equals the amount of oil the USA produces in one week. Sigh. We’ve still got a long way to go.