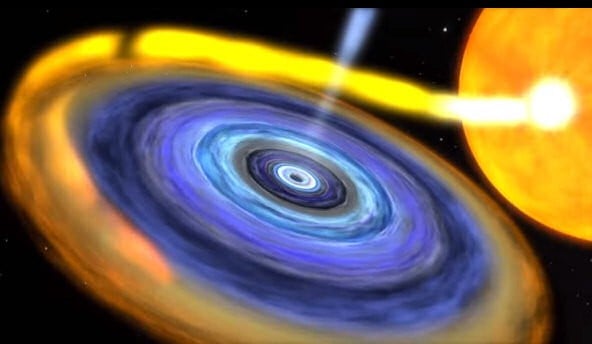 The internet has been all abuzz over the article this week speaking of a North Carolina town who rejected a proposed solar farm, and implemented a moratorium on solar farms. The residents, including a retired science teacher, were afraid that the solar panels would “suck up all of the energy from the sun”, thus killing surrounding trees and driving businesses and young people away. Black Holes – not to be confused with solar panels sucking the sun’s energy… but maybe if we had enough of them? (image courtesy of NASA)

We are going to take for granted that our readers know that solar panels only use the energy of the sun that shines directly on them directly and unlike black holes are unable to pull away surrounding light energy. So we aren’t going to go into the basics of how solar panels work. However, we do have a video on ‘How Solar Panels Work’ here that goes over how they do work. Sorry, black holes still aren’t involved.

But on a more serious note, we saw this recent news event as opportunity to take a moment to investigate a related topic of trees versus solar…

Cut Down a Tree to Provide Unadulterated Solar Power? While it is encouraged to find locations for solar installations that aren’t covered with trees like a roof, a parking lot, capped landfills, highway median strips, and closed gravel pits, etc., there are proposals out there that would require cutting down a significant amount of trees to make room for solar.  On a smaller scale, if you are considering installing solar on your home but would need to remove trees to eliminate the shade, a natural question comes to mind – does cutting down a carbon dioxide absorbing tree outweigh the benefits of a carbon dioxide reducing solar electric system?

The US Department of Energy put together instructions to calculate how much carbon and CO2 different trees absorb a year. Since tree species are so different from each other, it even considers the details of if it is a hardwood or conifer, and the tree’s growth speed. For more information see: Method for Calculating Carbon Sequestration by Trees in Urban and Suburban Settings.

I’m going to use this North Carolina town as an example, as the proposal  for the solar farms was to surround an existing electrical substation that is near a swamp, and would require removing trees. I’m going to use a white oak and long leaf pine trees as an example, as they are plentiful in the area and show a good example of the difference between tree types and the amount of carbon and CO2 they absorb.

According to the EPA’s CO2 calculator, every kilowatt hour (kWh) of electricity you generate via solar, eliminates 1.52 pounds of CO2  by replacing electricity that would have been generated by fossil fuels like coal.  So this tells me that if we were to remove one of each of these trees, we would have to generate 304kWh of electricity with solar each year. This can be done with less than 90 watts of solar in North Carolina.

Roughly 7 square feet of solar panels would replace the CO2 absorbed by the two trees. Some solar installers actually plant replacement trees in a different area to offset the loss of the removed trees. Another argument in favor of keeping a tree that shades your house is that the shade reduces the load on your air conditioner in the summer. which reduces the amount of electricity you use to cool your house. However, it has been found that solar panels on the roof of your house also shade your house, reducing the heat inside.

So now you know, the carbon offset good solar will provide often outweigh the carbon removal of a tree. But before you all go out and grab your chainsaws, first make sure there’s not a better location option that gives you the benefit of both solar and trees. After all the point is to decrease the overall amount of CO2 in our planet’s over-taxed atmosphere. Why not cover your roof with solar and add the beauty of a few trees to your front or back yard to really increase the net benefit to you and our planet?