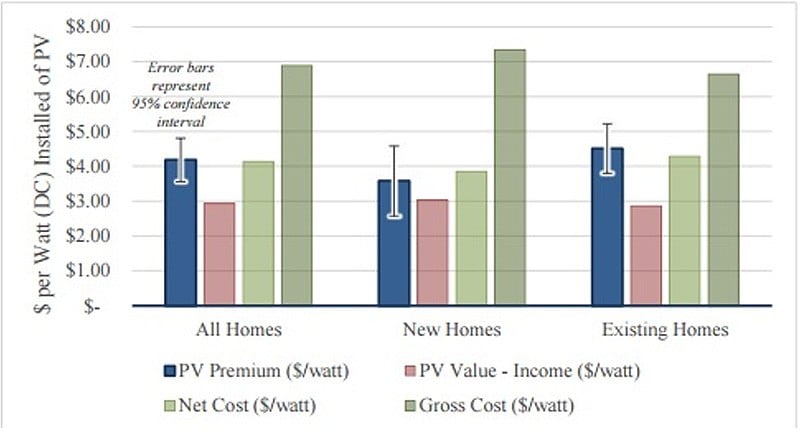 1. It takes more energy to make solar panels than it saves. Solar panels only work for a short time and wear out and have to be replaced.

The Embodied energy is the energy consumed by all of the processes associated with the production of a solar electric system, from the mining and processing of the silicon and metals, to manufacturing, transporting and product delivery of the finished solar panels and grid tie inverters. Most solar panels have a 20 to 25 year warranty, and a much longer expected lifespan. Grid tie inverters have anywhere from a 10 – 20 year warranty, and should be expected to be replaced once during the life of a solar system. The Energy Payback Time (EPBT) for a grid tie solar system, including the solar panels, inverter, racking, and cables, varies based on the type of system and location it is installed in. For monocrystalline panels it ranges from under one year to just above 2 years. Due to more efficient production methods, the EPBT has been cut to less than half of its 1990 figures. A look at the World Irradiation Map, that shows the intensity of the sun, gives you a good view of the years of energy payback for a grid tie solar system. If the solar panels pay back their energy consumed in making them in 2 years, that means they run for 28 years completely energy free, while replacing energy produced by dirty sources. An off grid solar system with batteries will have a longer EPBT, depending on the types of batteries. For example, the new Aquion salt water batteries have received Bronze level Cradle to Cradle certification, proving their minimal impact from creation through recycling.

2. Installing solar on my southern roof is the only option.

The first place people think of when discussing installing solar panels is their southern roof (or northern roof in the Southern Hemisphere). However, there are several options available if your roof facing the equator isn’t an option, either due to shading or obstacles such as dormers, skylights, or pipes. Installing the panels on both the east and west roofs allow at least half of the system to always be receiving fairly direct sunlight as the sun travels from east to west. A garage, shed, carport, or pergola may give some flexibility for other southern roof options. If you have some area available on your property, a ground or pole mount can be a terrific option for installing solar in an out-of-the-way spot. The deer are enjoying a shady spot underneath the solar array.

Solar power benefits all walks of life. Depending on your location, incentives available, and cost of electricity, installing solar can give you a complete Return on Investment (ROI) in as little as around 5 years. Even if you can’t pay upfront for your installation, and have to get a solar loan to pay for it, your monthly payments will likely still be less than your electric bill it is replacing, resulting in immediate savings.

For example, a 5000 Watt system paid for with a 5% solar loan could cost $62 per month for 20 years. Depending on your location, that system can produce about 500kWh / month. Assuming $0.13 per kWh, that equals $65 a month. So right out of the gate, your first month’s bill saves you money. Over the first year, that totals $216 savings. As electric costs go up, and they usually do, your bill stays the same. Over the life of your 20 year loan, you can save over $11,000. After the loan is paid off, your system is still making free power, saving you another $24,000 over the next 10 years.

If you don’t need to finance your system, and can pay cash upfront, the numbers are even better. Paying upfront for the system can save you over $1000 a year, adding up to over $42,000 in 30 years. So you are saving money while making clean energy. Good news for all. See the numbers in our previous blog THE SOLAR LEASE VS. BUY DEBATE; A QUESTION OF MATH.

Studies have shown the increase of retail value of houses with reduced energy bills from solar electric system. In 2014, Berkeley National Laboratory’s “SELLING INTO THE SUN: PRICE PREMIUM ANALYSIS OF A MULTI-STATE DATASET OF SOLAR HOMES”  showed that home buyers consistently have been willing to pay more for a property with solar across a variety of states, housing and PV markets, and home types. This was not just for California (see Myth #4), but also Connecticut, Florida, Massachusetts, Maryland, North Carolina, New York, and Pennsylvania. This chart shows that each watt of solar installed on a home, the property value increased by $4. So a 5,000 watt solar system adds around  $22,000 to the property value for existing homes, and $18,000 for new homes. Since this study was done on solar systems installed throughout the past dozen years, the gross cost per watt, before rebates, is high, around $7 a watt, and the net cost, after rebates, is right around $4 a watt. The price these days has dropped dramatically, so the gross cost is around $4 a watt, a the net cost, figuring just the federal tax credit (ITC), and not the state incentives, is $2.80 a watt. What does this mean to you? Spending $14,000 to install a 5,000W solar system can increase your property value by $22,000. That is a $6,000 profit. Plus, that solar system will be saving you around $1,000 a year.

A dramatic increase in solar sales has been seen in neighborhoods with other houses with solar. It is part “Keeping up with the Jones” and part removing the concern of being the first on the block. The solarized neighbor removed any fear, uncertainty, and doubt about installing solar, and proved it was a good idea.

There are also unseen advantages to installing a solar system on your roof. The shade from the solar panels actually protect your shingles from the sun, providing a longer life for the roof and reducing the cooling load on your air conditioning system.