A Comprehensive Guide to the Different Types of Solar Cells 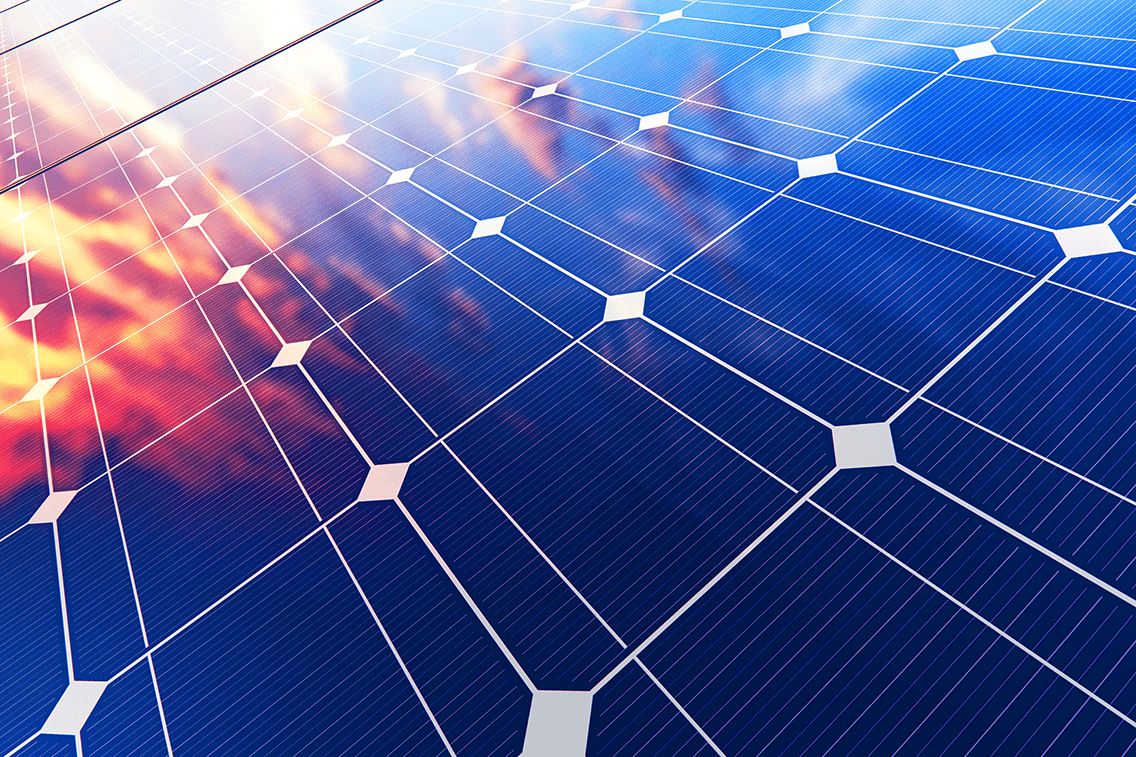 Photovoltaic cells, commonly known as PV cells, are thin layers of pure silicon that are impregnated with tiny amounts of other elements such as boron and phosphorous. When exposed to sunlight, they produce small amounts of electricity. They have been around since the 1950s, and were initially used as a power source for satellites in space. Since then, their prices have steadily come down from $40,000 per watt in the early 1960s to just $1 per watt or less today. PV cells are an efficient and long-lived power source, and are a great alternative to traditional energy sources such as coal and gas. There are many different types of solar cells – monocrystalline, polycrystalline and amorphous to name a few. Monocrystalline solar cells are made from single silicon crystals and offer excellent efficiency levels. Polycrystalline solar cells are made from multiple smaller crystals and tend to be more cost effective than monocrystalline cells. Amorphous solar cells, on the other hand, use layers of very thin semiconducting material instead of crystalline structures, which makes them cheaper but less efficient than other types of solar cells.

A photovoltaic (PV) cell is a thin semiconductor sandwich, made up of a layer of highly purified silicon. This silicon is slightly doped with boron on one side and phosphorus on the other side. This doping creates either a surplus or a deficit of electrons, which are referred to as P- and N-layers respectively. When these layers are exposed to sunlight, photons knock off some of the excess electrons. This causes a voltage difference between the two sides of the wafer, which is typically around half a volt in silicon. Metallic contacts are then attached to both sides of the wafer and an external circuit is connected to the contacts. This allows electrons to travel through the metal conductors rather than through the thin silicon layer, creating a current and completing the circuit. As PV cells have no storage capacity, they act as an electron pump, converting solar energy into electrical energy. 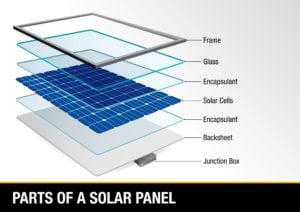 Producing Monocrystalline silicon cells is a process is similar to that used to manufacture transistors and integrated circuits, and it has been developed, optimized, and is clean. Single-crystalline cells look like deep blue glass because of the blue color of the silicon crystals. This technology goes through very slow degradation, typically 0.25%-0.5% a year. 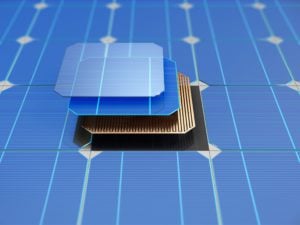 In this production process, pure molten silicon is cast into cylinders, then sliced into wafers off the large block of multicrystalline silicon. These cells are made up of multiple crystalline structures that form a pattern on the cell’s surface. Polycrystalline cells are slightly lower in conversion efficiency compared with single crystalline cells, but the manufacturing process is less exacting, so costs are a bit lower. Module efficiency averages about 15%–16%, sunlight to wire. Degradation is very slow and gradual, similar to that of single-crystal. Crystals measure approximately 1 centimeter (two-fifths of an inch) thick, and the multicrystal patterns can be clearly seen in the cell’s deep blue surface.

Doping and module assembly are the same as for poly and mono-crystal modules. 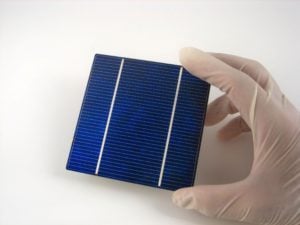 Heterojunction technology has seen a surge in popularity in recent years due to its higher efficiency and low cost. This technology combines crystalline and thin-film solar cell technologies to create cells with an amorphous silicon layer that is just a few nanometers thick. The ultra-thin amorphous silicon layer acts as an electrical insulator between the two cell materials, allowing for more efficient current flow than traditional monocrystalline cells. Hetrojunction solar cells can also use n-type semiconductors instead of the traditional p-type. N-type semiconductors are less prone to impurities, allowing for higher efficiency and more reliable operation. Despite their advantages, hetrojunction solar cells still have some drawbacks. The thin-film layer is not as durable as the thicker monocrystalline layer, so the cells need to be protected from damage. Additionally, hetrojunction cells require complex manufacturing processes that can be difficult to scale up. Overall, hetrojunction technology has many advantages over traditional monocrystalline cells, but it’s important to weigh the pros and cons before deciding which type of solar cell is best for your project. 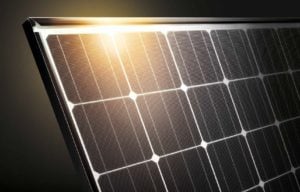 The advantages of bi-facial cells include increased energy efficiency and reduced costs as they allow you to generate more energy from a smaller area than with traditional monocrystalline or polycrystalline cells. This can make them attractive to residential installers who have limited space. In terms of installation, bi-facial cells can be mounted either on top of each other, or they can be mounted on a separate system to be able to orient them towards the sun. The downside of bi-facial cells is that they are more expensive than traditional solar cells, but they may still be cost-effective in the long run.

Overall, bi-facial cells can offer more efficient energy absorption than monocrystalline or polycrystalline cells, allowing for greater energy production in less space. They also come with an added bonus of being able to absorb reflected light, which can be useful in certain environments. However, they come with a higher price tag, so careful consideration should be made before investing in these types of cells.

Half-cell solar cells are composed of a substrate such as mono- or polycrystalline silicon, and the electrical connections between them are made with metal ribbons. By cutting the cells in half, it allows manufacturers to reduce cell series resistance and the number of contact fingers needed for electrical connection, resulting in higher efficiency.

Despite the extra cost, many homeowners and businesses are taking advantage of the increased efficiency by installing half-cell solar panels in order to maximize their energy production. Half-cell technology is also used in commercial solar farms in order to increase their energy output and make them more efficient. 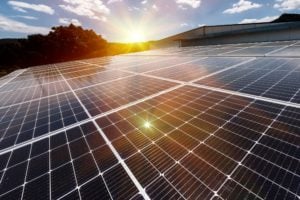 This type of configuration allows for the wiring of the cells to be done differently than with traditional solar panels. Whereas conventional solar panels have cells wired in a series of strings, shingled solar modules can be wired in parallel configuration, reducing the number of interconnects. Additionally, the increased efficiency of shingled cells reduces the amount of energy lost when transferring energy from the modules to the inverter. Due to their unique wiring configuration, shingled solar cells can also offer greater flexibility in system design, as they allow for larger and more complex solar systems to be built with fewer components. As such, shingled solar cells are increasingly becoming popular amongst installers looking to maximize their system’s output potential.