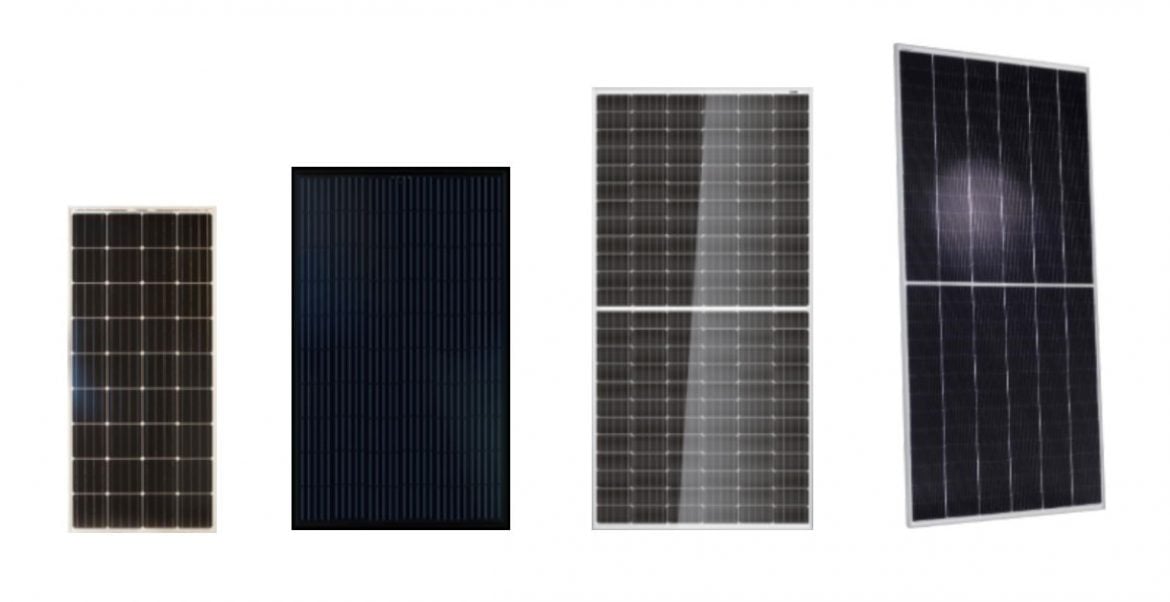 Note that unless otherwise noted, this article focuses on solar panels utilizing crystalline silicon (c-Si) cells – by far the most common type of cell currently used in solar panel manufacturing.

It’s no surprise that as solar PV has become mainstream over the past 30 years, improvements in technology have led to tremendous gains in the power a single solar panel can produce. What is a surprise is that during that time, solar panels’ dimensions haven’t increased all that much despite gains of over 7x in a single PV panel’s power output. This speaks to the facts that:

Before we get too specific, let’s get generic. There are no formal definitions or hard and fast rules around solar panel size and what makes a particular module “small”, “medium”, “large”, or “extra large.” But from a freight shipping standpoint, anything over 8 linear feet generally incurs an over-dimension surcharge, so we’re going to use that as the threshold for “extra large” solar panels. Note that because we’re talking about shipping here, an item slightly smaller than 8′ will incur an over-dimension charge if the pallet it ships on (including the packing material used to protect it) measures over 8′ (this is precisely the case with the Q CELLS DUO XL-G10 475/480W modules, coming soon to altE Store).

Generally speaking, this means that we can think about early-generation solar panels (which typically feature 36 cells) as “small”, the 60- and 72-cell modules that have dominated the industry for the last decade as “medium” and “large”, and modules with more than 72 cells as “extra large”. 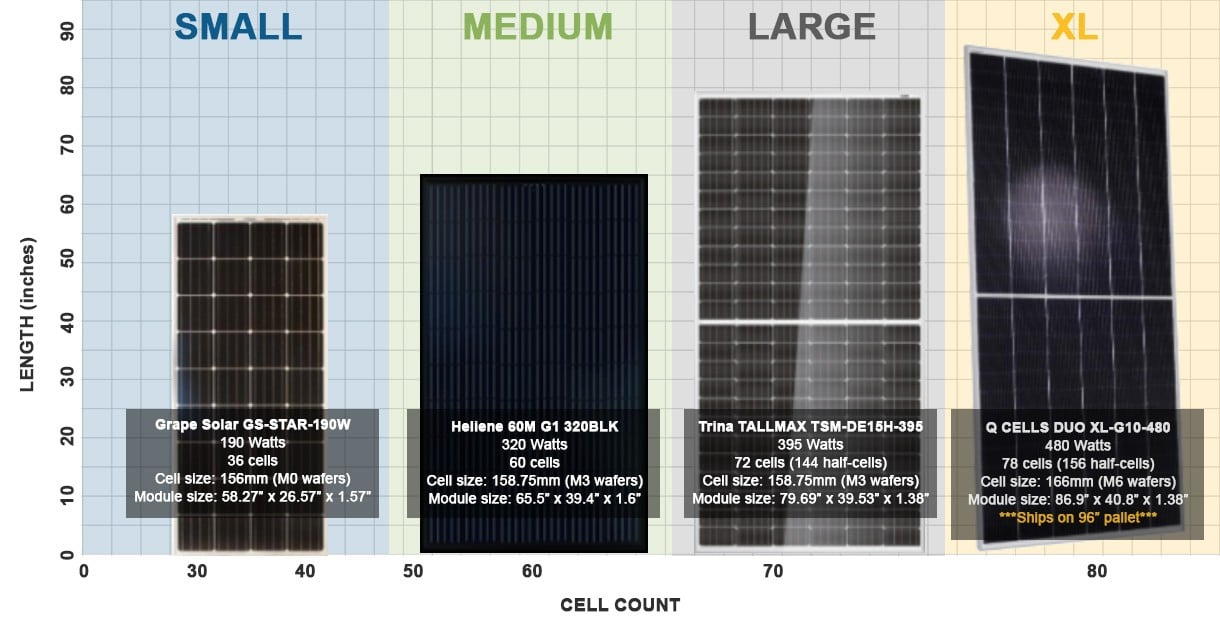 Of course, there are exceptions to many rules, and we do have a few here. Please note that:

What to Know About Extra Large Size Solar Panels

Extra large solar panels have implications for installers and DIYers planning PV systems. Though not overly common yet, XL size solar panels are here to stay. What does this mean for you?

How Did Solar Panels Get so Big?

PV cells’ efficiency has improved slowly and steadily over the last few decades. In the mid-1990s, efficiencies approaching 15% were at the cutting edge of solar cell technology. Today, efficiencies of 29% have been achieved in laboratory conditions, while numbers in the low 20% range are becoming the standard for modern commercially available modules. We are likely to see more efficiency improvements in the coming years before the theoretical efficiency limit of single-junction c-Si based cells at around 30% (known as the Shockley-Queisser limit) becomes a real obstacle.

Raw silicon is melted and shaped into long ingots, which are then sliced into paper-thin wafers that form the backbone of solar PV cells.

PV cell efficiency improvements have come in many forms, but the one related to the physical size of the cell is the silicon wafer the cell is built around. In the 1980s and early 1990s, wafers measuring 100mm square were the standard size. In the mid-1990s, 125x125mm wafers became the new standard, and those were eventually replaced by 156x156mm wafers (which was known as an “M0” wafer and thus began a new silicon wafer naming convention that currently extends all the way to 217×217 mm wafers known “M12+”).

Today, with consumers’ ever-increasing demand for electricity and incremental improvements in solar cell power production, we are seeing more and more powerful panels hit the market. Generally speaking, this is a good thing for consumers as it can facilitate lower system costs on things like racking, mounting, and balance of system components – so long as the increased costs of shipping and labor are carefully considered when purchasing extra large solar panels.