How to Claim the Federal Solar Tax Credit – Form 5695 Instructions

Updated 8/25/22 – The Inflation Reduction Act has increased the Federal Solar Tax Credit to 30% (retroactive for grid-tied and hybrid systems installed at any point in 2022) and extended it to off-grid (standalone) systems installed after 12/31/22. The IRS has not yet released their revised Form 5695, so our example below uses 2021’s version and 26% tax credit amount.

One of the biggest immediate benefits of installing a solar electric system is that it comes with a substantial federal tax credit. It is called the Solar Investment Tax Credit (Solar ITC) and it allows the system’s owner to reduce the amount of federal tax they owe by 30% of the system’s cost for the year in which the system was installed. Of all the renewable energy incentives available for solar systems, this is the most substantial – and among the easiest to take advantage of.

Who Can Claim the Federal Solar Tax Credit (Solar ITC)?

A United States taxpayer can claim the Solar ITC when they have a solar electric system installed at and used by a residence that is both owned by and used by the taxpayer as a primary or secondary residence. In addition to owning the residence, the taxpayer must also be the owner of the solar system itself.

Ownership of both the residence and the solar electric system equipment is essential. If you’ve gone solar through a lease or power purchase agreement, you will not be able to claim this tax credit.

Installation and commissioning of the system can be done either by a hired contractor or by the homeowner. A DIY solar system installation can qualify for the Solar ITC so long as all other eligibility requirements are met.

Examples of systems not eligible for the Solar ITC:

What Parts of a Solar Electric System Are Covered by the Solar ITC?

The Solar ITC is more than a tax credit for solar panels. It also covers:

*Batteries and energy storage devices must be intended to be added to the system by its second year in use in order to qualify for the federal solar tax credit.

Does the Federal Solar Tax Credit Carry Over to the Next Year?

Yes. The Solar ITC amounts to 30% of the cost of the solar electric system’s components and installation. If that amount exceeds your tax liability, the remaining amount can be claimed on next year’s taxes. The federal solar tax credit form (form 5695) includes lines to designate and claim a carryover to the following year (referred to as a “carryforward” on the form).

Download IRS Form 5695 here, then complete it by following the instructions on Form 5695 itself. Use the detailed instructions on the IRS website for additional help and if necessary. Here’s an example of how this would go for a solar electric system for which you purchased the equipment from altE and then did the installation yourself. 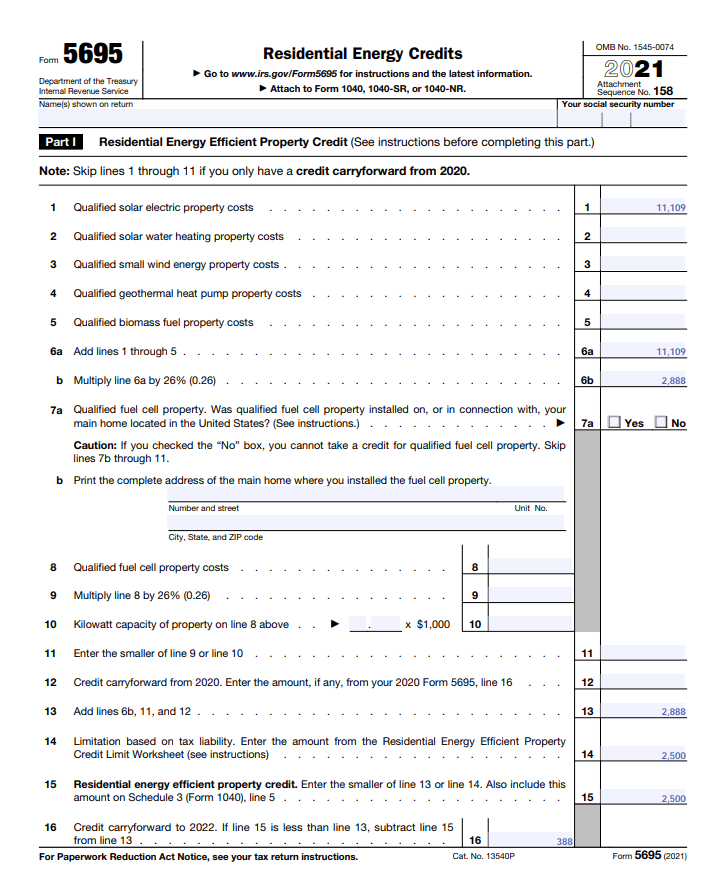 In addition to the Federal Solar Tax Credit, be sure to check out other solar rebates and renewable energy incentives in your state, which can work together to save you as much as 50% or more on your installed solar system!

This article is for informational purposes only and should not be considered to be tax advice, legal advice, or accounting advice.