Grid-tied Solar and the Dreaded 120% Rule 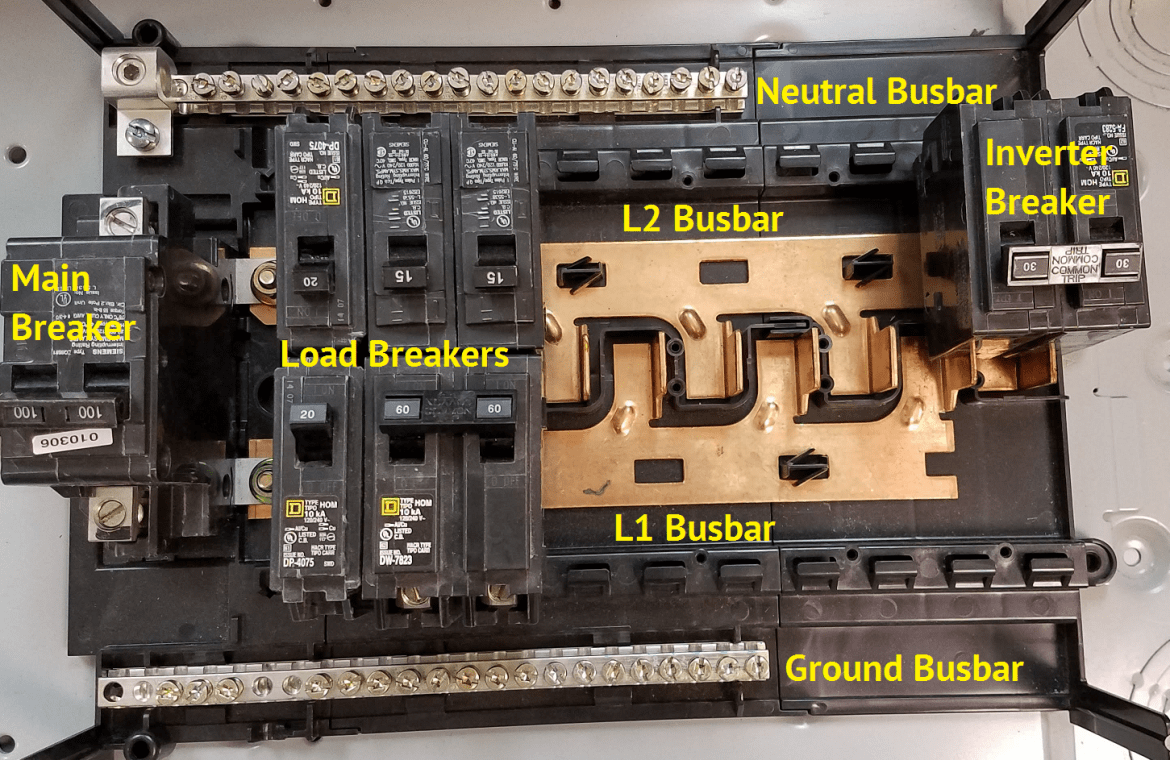 The 120% Rule and Your Main Breaker Panel’s Limitations 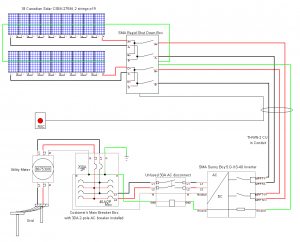 The altE Store started designing and selling grid-tied solar systems way back around the year 2000. Back then, a typical solar system was about 5000W. Nowadays as the price of solar panels drops, the size of the solar array rises. A larger solar array requires a larger inverter. Now 10,000W inverters  and larger that used to be reserved to commercial solar systems are now becoming commonplace in residential. Once solar inverters get larger than 7680W, installers often will run into a restriction from the National Electric Code (NEC) that needs to be addressed.

This restriction has become known as the 120% rule. We are going to explain the rule, and cover ways to deal with it.

Connecting to the Grid 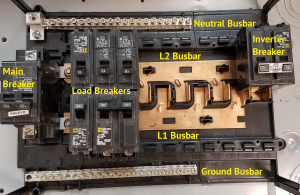 The most common way to connect a residential solar system to the grid is in the main breaker box through a new dedicated breaker, as shown in the schematic. 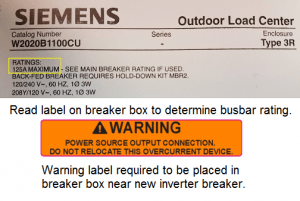 NEC705.12(B)(2)(3)(b) states that where there are two power sources, the grid and the solar inverter, the sum of their breakers cannot equal more than 120% of the busbar rating of the breaker box. What that means is if you have a typical 200A rated main breaker box, and have a 200A main breaker in it, you cannot add another breaker for the inverter that is larger than 40A, because 200A x 120% = 240A, which is the 200A main breaker plus the 40A inverter breaker. The inverter breaker must be at he opposite end of the breaker box to prevent concentration of the current at one end of the busbar. If both breakers are near each other, the sum can only equal 100% of the busbar.

It gets even worse if you have a 100A breaker box, you are limited to only adding a 20A breaker for a 3800W inverter.

So, what options do you have if you want to install a solar grid-tied inverter in a home with a 200A rated main breaker box? If a 7680W inverter like the SMA SunnyBoy 7.7kW Inverter isn’t big enough for you, there are basically three solutions, with pros and cons to each. All of the options will require you have the electric company turn off power to your house while the work is being done, so make sure you coordinate with them. 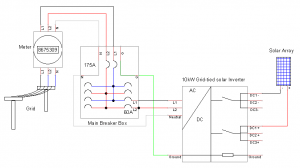 This may be the least expensive option, but it is not ideal. The downside is that you will now restrict the amount of current allowed to and from the grid. If you have high energy loads all come on at once, you may have a nuisance trip on your main breaker, where it used to be able to handle the loads just fine with the bigger breaker.

If you do have high loads and you cannot reduce your main breaker with a lower amperage, you could replace the whole breaker box with a 400A breaker box. This will give you the ability to add up to 80A for the inverter(s), giving you over 15kW of solar power.

Unfortunately, this is the most expensive option, as you need to buy a new breaker box for thousands of dollars, coordinate with the electric company to temporarily turn off your service and most likely hire an electrician to make the swap. This entails moving all of the circuits from the old box to the new box, a very labor intensive project, if the existing wires are even long enough to do it.

An increasingly common solution is known as a Line Side tap, a.k.a. Supply Side tap. This work is usually done by a licensed electrician. The main breaker box is completely bypassed, and a fused AC Disconnect is used to connect the inverter to the grid between the utility meter and the main breaker box. This removes most restrictions imposed by the breaker box, as long as the main breaker is big enough to receive the power from the inverter.

Solar power from the inverter is either sent back into the main breaker box through the main breaker, same as the grid power, or it is sold to grid. Line side taps do not interfere with net metering or Feed-in Tariffs (FiT), although an additional meter may be required as a dedicated production meter. This production meter will measure all of the solar power generated, regardless of if you use it or sell it. Unlike the bi-directional net meter, it only spins forward, counting the Wh you made with the sun.

The electric company would be required to agree to this configuration, some companies do not like their clients doing a Line-side Tap. 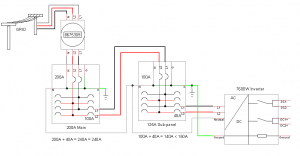 Feeding from a sub-panel

Not So Dreaded Anymore

So now that you understand NEC705.12, you can decide which option works best for your solar system.