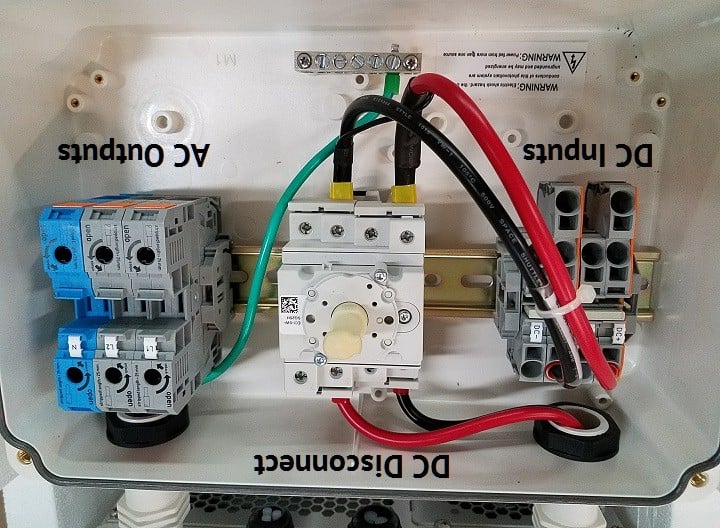 SolarEdge inverters for grid-tie are a terrific option for installing anywhere from 3kW to 11.4kW single phase solar power systems for residential or small business. With the SolarEdge DC optimizers installed at each solar panel, it controls the voltage output of each string, allowing for much longer string lengths than a typical string inverter.

String sizing is simple as well, the minimum input is eight solar panels per string, and the maximum rated wattage is 5250W per string.  Since a SE7600A-US grid-tie inverter can handle up to 10,250W input from a solar panel array, it’s easy to see that you can wire up to two strings of 5125W into the 7600W inverter. 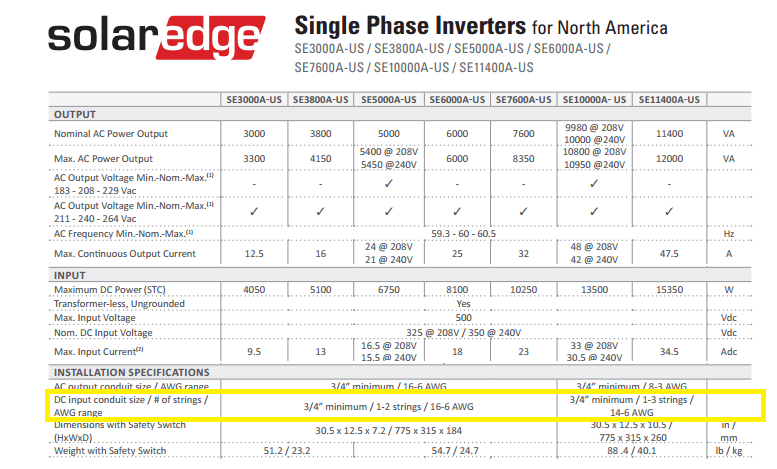 SolarEdge Single Phase Inverters, 3 strings is possible once you get up to 10kW and larger.

The DC optimizers on the solar panels will convert the voltage of the string to 350V, regardless of if there are 8 or 20 in a string. The current is adjusted so that the voltage is always 350V. Therefore, if a string has the maximum input of 5250W, and an output of 350V, then we know that the maximum current per string into the inverter is: 5250W ÷ 350V = 15A. 15A can be used for wire sizing the homerun back to the inverter. The inverter has two inputs that can hold up to 6AWG wire.

However, with larger SolarEdge inverters, like the SE10kW and SE11.4kW, these limits became restrictive.  Two strings of 5250 are 10.5kW, yet the inverters can support up to 13.5kW and 15.35W respectively.  Therefore three parallel strings are required to maximize the input.

For example, the 11.4kW could have three strings of 5.11kW. But if you try to parallel 2 of the strings at the solar array, so that you can bring two strings into the inverter, the combined string will be carrying 29.2A (10.22kW ÷ 350V = 29.2A). Once you factor in all of the required NEC derations, you may need bigger than 6AWG wire to carry that load.

For more on wire sizing, see our video on determining wire sizing for your solar system, Wiring Your Solar Power System .

The simple solution is that SolarEdge has 3 inputs for the wire on their two larger inverters, 10kW and 11.4kW. As you can see in the  pictures below, one of the DC inputs has 2 connectors for up to 6AWG wire, and the other has 1 connector.

Inside the Safety Switch with DC and AC Connectors

This allows you to run three strings back from the solar array in conduit, and connect all three strings in the wiring box of the inverter. Thus the combining of the strings takes place in the inverter, allowing you to have the current spread across three strings for the homerun, resulting in lower current and smaller, less-expensive wire sizes. 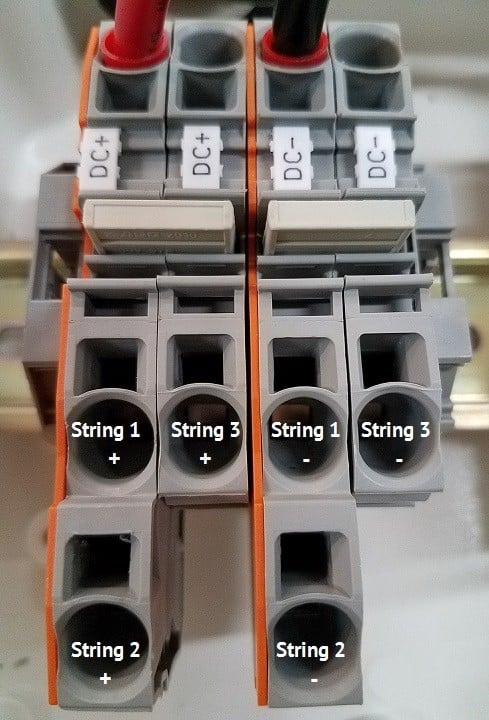 If you want to learn more about SolarEdge inverters and see how they differ from both string inverters and microinverters, check out our video comparing the three technologies.