Michael Smith has been "thinking sun" for years. Read of Michael's journeys with Solar Electric and Solar Thermal systems.
written by Danielle Shaughnessey

At first glance, Michael Smith’s Connecticut home looks like the typical New England house. Colorful Adirondack chairs sit together on a beautiful stone patio out front and blue shutters hug the windows of the second stories. However, if you look above the shutters, you’ll see solar panels on the roof. Michael’s home has a PV and Solar Thermal System!

When oil hit $140 a barrel in 2007, Michael Smith knew it was time to make a change. He lives in southwestern CT, in a town called Ridgefield with his wife and daughter. When one thinks of Connecticut, they may not automatically assume that it is conducive to solar. However, Michael Smith discovered otherwise. “I never thought that we had an especially sunny climate here, but since I became involved in solar energy, I find myself marveling at how sunny it is here, especially in the spring and summer,” he says. 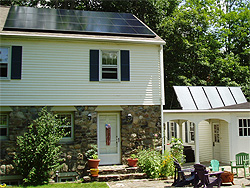 Michael, who works at MasterCard analyzing the card portfolios of banks around the world, began the process of educating himself on Renewable Energy by attending a PV seminar sponsored by the Connecticut Clean Energy Fund at his local library. He learned that Connecticut is a very friendly state for PV. “We have very high electrical rates, but the sun shines a lot,” Michael explains. “We also had great rebate programs in place back in 2007.” He left the seminar with a booklet recommending several local installers.

Michael began working with a certified installer to put together a 4.5 kW Photovoltaic system for his home. In Connecticut, you must work with a certified installer to take advantage of the rebates offered by the state. His system is made up of 24 Sunpower 205 Panels and a SunPower inverter. “The system is working great. The last three months have been really sunny and my electric bill has been just $16, the connection fee for Connecticut Light and Power,” Michael says. 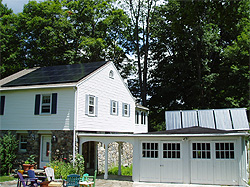 Michael had his PV system for about six months and decided he wanted to add a solar thermal system to his home. He was thrilled with the amount of sunshine he was getting for his PV system. Michael realized that a solar thermal project would be very different from his PV installation. “With PV, you have to work with an installer to get the rebate, and your design is simple: put up as many panels as your roof can support,” Michael explains. “Solar thermal was a bit more complex.” Michael’s home has radiant heat and he wanted to design a system to supplement that. He spoke with many installers and couldn’t find anybody willing to do space heating or a drain back design. He purchased a copy of Solar Hot Water Systems, by Tom Lane from the AltE website. “I would recommend this book to anyone looking to put together a system,” Michael says.  He used the website as a source for all of his research. He found himself filling his online shopping cart and soon realized he couldn’t possibly order everything without talking to someone first.  Amy Beaudet specializes in Solar Thermal at AltE and answered Michael’s call. “Finally someone said, ‘Sure that design will work!’ and helped me create the full system,” he says. Michael emailed Amy some of his design drawings and had several email and phone conversations about his system. “I found Amy to be an incredible partner on my project,” Michael says. “She knows a tremendous amount about solar thermal systems, but she is a DIY person herself and so she approaches your project with the same enthusiasm and thrill of discovery that you have.  That makes an incredible difference.”

Michael’s system is made up of five AET collectors for a total of 125 square feet. He has two 80-gallon tanks in his basements. His collectors are mounted at a steep 60-degree angle. This was done to maximize the heat gain in the winter and minimize the gain in the summer. “My system is a drain back system, so the collectors are mounted on the garage roof at a slight slope towards the basement,” Michael explains. He says he spent a lot of time working with different pumps. He undersized the pump twice and found for his larger array, a bigger pump works best. He now has a TACO 0026 pump which provides a lot of flow. Michael is very excited about how the system works with his radiant heat. He has a set of bypass valves that send the radiant heat returns through the top heat exchanger of the tanks. He says that from mid-February to April, he is able to draw 30,000 BTU’s off the hot water tanks after a sunny day to supplement his radiant system. From the middle of May to October, when Michael’s furnace is off, the system usually provides all of his domestic hot water. His home has an oil furnace for heating water, and Michael estimates that with his solar thermal system, he is saving around 250 gallons of oil a year! 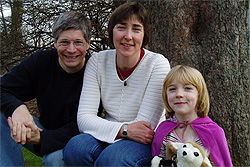 Michael Smith with his family


Michael’s system was installed in the fall of 2008 after a friend helped him build an addition onto the back of his garage to allow for more space. A plumber helped him with the copper work. Michael was able to learn a lot about working with copper. He says the plumber was pleased that the system worked. “My plumber was really excited to work on this project since he knew this was a growth area and he is a fairly high-end contractor,” He explains.

Michael enjoyed the design and installation of his solar thermal system so much that he decided he wanted to spread the joy and help others lower their fossil fuel use as well. “With all the great products out there and all the tax benefits, this is a great time to be installing RE systems.” He says. He plans to take one of the Solar Thermal Installation courses this fall.