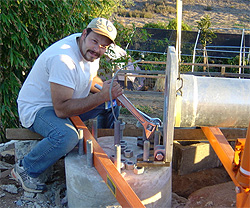 Alt-E customer Kris Hansson is a do-it-yourself superstar! Read about his amazing project and how he works to incorporate Renewable Energy into his daily life with a wind turbine.
written by Danielle Auger

Kris welded this frame to hold the bolts in place for his Skystream.

Kris Hansson starts each morning feeding his two horses, two dogs, and canaries. While eating breakfast, he goes to work looking over the e-waste pick up route planned the night before. Kris owns a company called T&K Computer Recycling. He recycles computers as well as all types of electronic waste. After he collects the e-waste and computers, he disassembles everything and separates them. Everything has its own recycling bin, copper, iron, aluminum and so on. "I try to recycle everything in my life, even soup cans go into the iron bin," Kris says.

Even with all of his work to help the environment, Kris still wanted to lower his carbon footprint. He did some research, and realized that Renewable Energy was a good start for him. "After doing some research, I found that a wind turbine was cheaper for me to install than solar panels," Kris explains. "I always research before I buy anything. I found the easy to use altE website had the lowest prices on items and shipping." He worked with Ben Farmer and put together a system.

Kris now uses renewable energy from the wind turbine he purchased to power everything in his home and home office. He runs his water pump in the well, water heater, stove, and clothes dryer among other things! 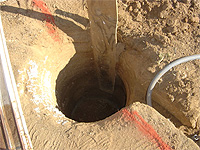 Carving the 7' hole in the ground.

Kris' system is made up of a Skystream 3.7 220V Land Turbine. This turbine is specifically designed for residential use. He mounted the turbine on a Southwest Windpower Skystream Monopole. This is a free standing monopole that requires no guy wires for structural support. Kris also uses a Southwest Windpower Skystream Wireless Remote Display to monitor the performance of his wind generator. This device also allows him to turn the generator on and off from inside. He uses a USB Converter to download the data from his system to his computer.

Kris went beyond a typical do-it-yourself'er project and installed everything himself! "I did all the work, from welding a frame to hold the bolts in place to renting a 20" auger to carve the 7' hole in the ground," He says. Kris even mixed his own cement for the hole to cement the bolts in place. He mixed the cement two bags at a time with a small electric mixer. "I worked the whole day and got a slight back ache the next day." Kris says that while the installation took him a while, he believes it saved him around $8,000.


Kris lives in Oceanside, CA. He says it is mostly sunny there and windy 90% of the year. He lives in a rural part of Oceanside, and his only neighbors are tomatoes and a tree nursery. Despite his location, he has still generated some interest in the community. While he was checking his mailbox, he has been asked by two people about his turbine.

As for Kris' next renewable energy endeavor, he hopes to get solar panels and be 100% bill free. We look forward to hearing details on what this extraordinary do it yourselfer will be up to next!