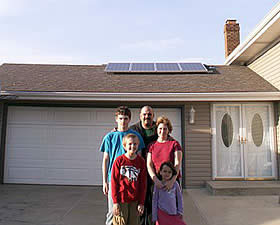 Renewable Energy provides protection for an average Indiana Family. Brent Cash wants his family to be comfortable and safe even when the power goes out. All this and he is still doing his part to help save the environment.
written by Danielle Auger

In Dyer, Indiana an average middle class man decided to incorporate renewable energy into his lifestyle. Brent Cash a 38-year-old business owner and part time police officer wanted security for his wife Peggy and their three children. “We’re an average middle class family in an average middle class neighborhood,” Cash says. He was always interested in solar but that interest grew when he went to visit family in Hawaii and learned they were using solar energy to live completely off grid. After speaking with his family and getting all of the information he could from them, he thought he would give it a try in his own home. “The cost of running utilities is more than it would cost to put your house into solar,” Cash explains.

The idea of being electrically self-sufficient was astonishing to him. “If my power goes out I want my family to be comfortable. It’s about security,” He says. When he returned home from Hawaii he found the AltE on the Internet and began working with James. “In the beginning it looked like I needed $58,000 to set up a system,” Cash says. “I told James what I had to spend and he told me what we could do on my budget.” Cash purchased a Kill-a-Watt Meter and measured what he would need to run one electrical circuit in his home. He did his homework, figuring out the loads. He and James put the components together. “James picked out some great Outback equipment,” Cash says. “He guided me in the right direction.” He paired up with an electrician to help with the installation of his system. Brent Cash, who has also been running his own business “Cash and Sons” for eleven years, enjoyed the installation process. “I’m almost sad to be done with the installation,” Cash replies with enthusiasm. “I had great help from James and support from the website.”

He reaps many benefits from his system. He produces enough electricity to off set 15% of his total electrical usage. “For $10,000 I was able to get into a system that would give me money back and provide security for my family.” Cash’s system is now fully installed and being put to good use. When asked about his experience with Renewable Energy and AltE as a whole he replies, “I am a satisfied customer. It was money well spent.”

Call or write our technical sales staff members for help on putting together a quote for a solar electric system that will meet your needs.