Renewable Energy in the Cayman Islands 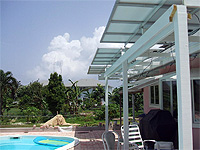 John Bodden shares with us a glimpse of what life is like living in the Cayman Islands using renewable energy.
written by Danielle Auger 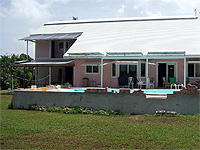 The south view of John Bodden's home in the Cayman Islands

Warm sun and turquoise waters that meet white, sandy beaches: To many of us this sounds like a great place to spend a vacation. However, to John Bodden, this is home. His family has lived in the Cayman Islands for generations. John can still recall a time when there was no electricity on the islands. "I was born in 1956," John says. "And the present power utility company was established in 1966, so I can still recall studying by the light of a kerosene lamp as a child and growing up in a pristine environment without electricity."

Residents of the Cayman Islands have a strong history of making a living from the sea and John himself has come from a long line of sea captains. "[T]here are many lessons on conservation to be learned when a dozen men set out in a relatively small sailboat to cross a body of water on a passage that will last several days," John says. He feels that the younger generations there do not have the same appreciation for conserving energy and the environment. Located 480 miles south of Miami, the Cayman Islands now receive more than a million tourists a year.

John Bodden explains that he had an interest in renewable energy for a long time. When Hurricane Ivan hit the Cayman Islands in September of 2004 and left most people without power, he put it high on his list of priorities. In March of 2006, John fell off the roof of his house and broke his leg. While the break was a bad one, this gave him the time he had wanted to research alternative energy for his home. He found AltE and began working with Ben Farmer.

1920 watts of Evergreen panels off John's upstairs balcony fixed at 20 degrees and supported on fly rafters so as not to compromise the integrity of a roof still under repair from Hurricane Ivan.

"The staff was knowledgeable and friendly, which was a breath of fresh air when compared to some companies who were prepared to 'beat any price' but had no clue as to what it was they were providing," John explains. "In the end I decided to purchase nearly everything from a single source."

John uses 28 Evergreen 120 watt photovoltaic (PV) modules to power nearly everything in his home during the day. He explains that the local utility company there does not allow for grid tie. He hopes that this will soon change, as the power company is currently in negotiations with the government to allow it. He runs the power from his Outback PS1-2500 Watt system to another panel box next to his main panel. John installed some 3-way switches in a box next to both panels and connected the load circuits to one pole of the switch. The other two poles of the switch are then connected to a breaker in the panel box from the utility company and to a breaker in the panel box from the Outback inverter. He puts the switch in the up position for the load to be powered by solar and down to be powered from the grid. 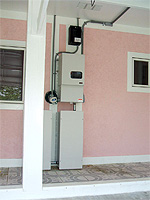 
John's switching system allows for him to switch between his off grid Outback setup and his standard electric company service. He does not have them both on at the same time because of the current rules on the island. John admits that this is not the most efficient method of using the power he generates but he does manage to use about 14 kWh of solar power on average each day. He uses half of this power to run a swimming pool pump. John also has a Collector and 12V El Cid brushless DC pump that circulates water from an AET Solar Water Heating Collector through his electric water tank for solar hot water.

John once used a domestic hot water setup, but has not used grid electricity for hot water in over a year. "It's a very simple design that pumps water anytime the sun is shining since I don't have to worry about any freezing issues," John says. His wife usually runs the washing machine and the dishwasher when the water is at its hottest, around 3 p.m., to best take advantage of the solar hot water produced.

John Bodden has gotten in touch with the environment and can fully enjoy the simplicity and beauty of the area he lives. He has succeeded in using renewable energy to power his life in paradise.

Call or write our technical sales staff members for help on putting together a quote for a solar air heating system that will meet your needs.