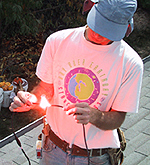 Susan and Christel have found a new and exciting way to do their part for the earth and share their passion for the environment with the world. Learn how you can do the same in this customer's story straight from California.
written by Danielle Auger Homeowners with Solar Systems around the country open their homes every year to the public for The National Solar Tour. Palo Alto, CA hosts a segment of The National Solar Tour on October 7th in 2007, hosted by Acterra.org. Susan Osofsky and her housemate Christel will be participating for the third time. They look forward to the Solar Home Tour because they love to educate people on why solar energy is feasible. “I think people are really confused about what they need and what the costs will be,” Susan says. Many times the tour is like a four-hour open house where participants will go from house to house and the hosts may give talks or handouts about the home and system. Susan and Christel like to put out information such as electric bills, books, graphs and charts for guests. Susan, an organic food and farming advocate, and Christel, a research librarian at a local bank, purchased their system through AltE. They have 12 165Watt Sharp Solar panels, a Sunny Boy 2500 Inverter, and Unirac Mounts. The photovoltaic system produces enough electricity to cover 100% of their bill for nine months out of the year. Over the course of a year they produce more electricity than they use, generating approximately 2250 Kwh a year and only using 1921 Kwh. “Electricity shows up as a debit on our utility bill,” Susan explains. Many residents in their area have electricity bills that are rising but Susan says they are insulated from the fluctuating costs.

Palo Alto is located 35 miles south of San Francisco and has a population of about 61,200 people. Susan and Christel live in a community that supports residents trying to save money and the environment with renewable energy systems. The city offers tax credits and incentives, making the purchase and installation of a PV system more affordable. “It helps to have a culture and community of people that are supportive,” Susan says. “People were really into it and helped out.” A friend designed the system. Susan and Christel eagerly took part in the installation. Susan was recovering from knee surgery at the time but still wanted to participate. She helped out with some of the wiring and was put in charge of taking pictures of the entire process.She had to remain mostly on the ground so she painted the conduit in the system yellow and green. The yellow conduit houses the wires delivering direct current from the photovoltaic array to the inverter. The green conduit houses the wires carrying alternating current from the inverter to the electric grid. These colors show where the energy absorbed through the panels is turned into energy we use in our homes. This is a wonderful visual aid that helps newcomers learning about renewable energy understand how a solar system works. The twelve solar panels are mounted on their garage. “We think people don’t notice them but they do,” Susan explains. “It’s fun to talk to people about it.” Many people see the panels through the Solar Home Tour or by passing by and are curious. “There are always people here,” Susan says. Susan and Christel have an organic garden and also participate in Garden Tours. They find that during these tours they end up talking about their Solar System. Susan and Christel are passionate about the environment. “We wanted to do something green,” Susan says. “It’s a great environmental thing to do to lessen our footprint on the planet.”

Call or write our technical sales staff members for help on putting together a quote for a solar electric system that will meet your needs.