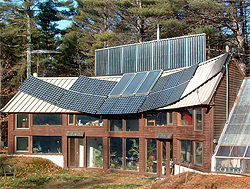 After working in the RE field for over 25 years, Thomas Hopper has finally completed his very own solar project on his home in Concord, N.H.
written by Danielle Shaughnessey

Thomas Hopper has dreamed of designing and building a PV system for over 25years. Tom and his family began searching for land to build a solar powered home when they moved to Concord, N.H., in 1982. His dream came true in 2009 when he completed installation of an active solar space heating system and a 4.4 kW photovoltaic grid-tie system on his home. 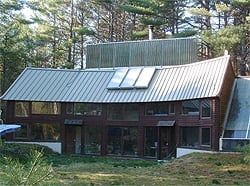 Renewable energy has been an interest of Tom’s for a long time.  In 1970, he started a career in architecture, working in Boston. “I became aware that I was not satisfied with the general direction of architectural design, especially after working on Paul Rudolph's Mental Health Center in Boston near Government Center, as this building from its inception had an inherit energy wasteful quality about it,” Tom explains. He enjoyed the project, but says that it was his wake-up call to energy issues in architecture.

In 1975, Thomas Hopper became the first employee at Sunworks Inc., a solar collector manufacturer. He worked inventing solar equipment and soon focused his interests. “I found that while active solar equipment and system designs were satisfying,” Tom says, “ I became more interested in the application of passive solar and, most importantly, the conservation of energy as the first thing to do in any project.” He started his own company, The Insulating Shade Company, in 1977 after inventing movable insulation for windows. He taught Architectural Engineering Technology for 15 years and is now retired, giving him more time to focus on his personal renewable energy projects.

Tom came across the altE store after doing a Web search. He found the site simple, direct, and clear. “It was the service and communication that clinched the deal for me,” Tom explains. “I wanted to work with altE after corresponding and talking with Amy Beaudet.” Tom says that he felt no pressure during the planning and ordering of his systems. He felt Amy, his sales person, covered all the details and followed through from planning to payment and pick-up of his order. Tom adds that he especially liked having the option of picking up his order in person at the New Hampshire warehouse. 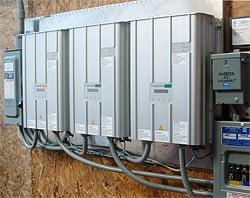 Tom’s PV grid-tie system is made up of 21 Kyocera KD210GX panels with three arrays of seven panels in series. Each are tied to a Solectria PVI 1800 grid-tie inverter with three inverters total. He custom built all of his panel frames to accommodate his roof. 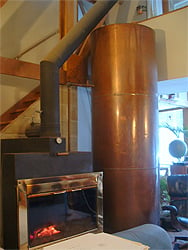 For his space-heating system, Tom tells me that he recycled seven SunMaster evacuated tube collectors as a drain-back system using no antifreeze. He mounted the panels vertically to prevent build-up of snow during the winter months. The system includes an Eagle 2 Differential and a three-speed Grundfos pump. During the colder months, Tom will also burn wood and says he used less than a cord this year. Hot water produced by the system is directed to a 450-gallon exposed copper tank sitting vertically in the living space. Seasonally, the wood stove can also heat the tank as needed. “We simply let it leak the heat into the house radiantly and with natural convection,” Tom explains. 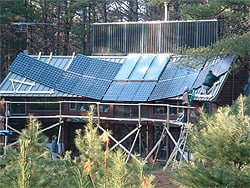 Tom installed both of his systems with the help of his two sons, Adam and Eli. He says they were skeptical about renewable energy at first. “The stuff we put up really works and they have to agree; a nice sense of satisfaction for me as a Dad!” Tom says happily.  The installation went smoothly. They took special care balancing everything on the different slopes of his roof. He says the most important parts of the installation were rugged staging, good stainless-steel fasteners, and careful color-coded wiring.

With both of these systems, Tom generates about half of the electricity his family of four uses. Some of the things their system helps power are a well pump, refrigerator with freezer, lighting, four computers, fans, swimming pool collector and pump, two AC units during hot summer months, and power tools! When they don't have enough solar to cover their needs they buy the energy they need from the grid. “[It’s] nice to see only a $20 bill from the utility each month,” Tom says. 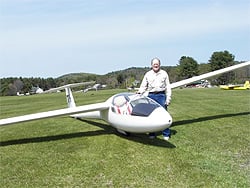 Thomas Hopper may be retired, but still very busy. He enjoys swimming in his solar-heated pool, traveling, and flying his glider. “Soaring for me is the ultimate solar sport followed by sailing, both passions of mine,” Tom says.  You can learn more about Thomas Hopper and his exciting projects by visiting his website, http://www.hopperdesignllc.com/solarhomes/content/Home.php.