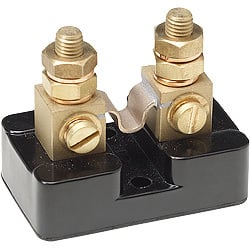 How a shunt works

A shunt is necessary in order to measure amps and amp-hours with the TriMetric battery monitor. A shunt is an accurate, very low resistance resistor which is placed "in line" with the wire carrying the current to be measured. With the TriMetric, it is usually placed in the negative wire from the battery bank, such that all the current going into the battery (charging) or out (discharging) must pass through it. Connected in this way it will be set up to monitor "net" amp-hours in and out of the battery. (It also could be placed in series with the negative wire coming from a solar array--or other charging source--in which case it would measure only the solar array current, if that were desired--to show total solar "amp hours" production.) The shunt needs to be placed near the batteries; since these wires carry very high currents the wires from the batteries must be kept short to minimize electrical losses.

When current flows through the shunt, a small voltage is developed across the shunt which is proportional to the current flow. The TriMetric battery monitor accurately measures this very low voltage and converts it to the "amps" reading on the meter. The resistance, which is the ratio between the voltage across the shunt and the current flowing through it, is a constant for any particular shunt--and is one of its important parameters. For most substances, resistance is usually described in "ohms", however for some reason shunts are described by the voltage drop that occurs with a certain current: for example: "50 millivolts at 500 amperes." However the meter only cares about the ratio-which is the resistance--so a 500Amp/50 millivolt shunt is equivalent, from the TriMetric's view, to a 250Amp/25 millivolt shunt. They both have a resistance of 0.1 milliohm, or one ten thousandth of an ohm.

Setting up the TriMetric for correct shunt

The TriMetric is designed to use either a 500 Amp/50 millivolt (0.1 milliohm) or 100 Amp/100 millivolt (1.0 milliohm) shunt. The latter shunt delivers 10 times the voltage for a given current flow through the shunt, so themeter can show an extra digit of current resolution (down to 0.01 amp) compared with the 500 Amp/50 millivolt shunt, which displays a minimum current of 0.1 amp. To make the TriMetric read "amps" and "amp-hours" correctly, you must tell the TriMetric which shunt is being used. This is done by programming either an "L" (low) or "H" (high) in one of the program modes. ("L" for the 100A/100 mV shunt, and "H" for the 500 A/50 mV shunt.) For how to do this refer to TriMetric instructions under "How to set efficiency factor and shunt type".

Although its difficult to screw up a shunt with todays
manufacturing techniques, I have to say this little shunt
was a piece of cake with which to work. Easy connections
to the Trimetric meter and so far seems accurate up to,
and including, a 50 Amp throughput. Buy it; you w...
Details

Get this when you are installing the Trimetric in an RV. Add the 4 wire cable and you complete the trio. I have a pair of Trojan T145s and this works great!
Details