I was not allowed to update my previous review until I created a new account.
AltE did replace the original battery with the defective BMS. The replacement battery, a 3600 HLX V3, is a big disappointment. It will discharge as advertised, however, it does not charge as advertised and causes significant issues. The updated BMS in this battery does not work anywhere near properly. The replacement battery experiences issues when the charge controller exceeds charging it above 55 amps. After 3 months of use and monitoring the battery with my own equipment during this time I am reasonably sure I have determined the defect with this battery. Incidentally I have produced over 200kWh in this time frame and the battery only registers 3 cycles???? My estimation is that should be around 35 cycles higher!!!

1 of 1 customer found this useful 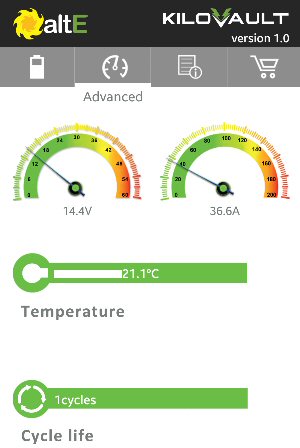 Since the above review is anonymous, we're uncertain of the details. However, we have worked with a customer who had a similar issue and, upon providing a screenshot of the Bluetooth app, demonstrated that the battery was being charged strongly at a voltage that exceeded "full" and beyond what is specified in the operations manual.

The KiloVault BMS is there to protect the batteries from being overcharged, overheated or run at very low temperatures. The KiloVault BMS is one of the most robust, in terms of current carrying abilities, of any batteries of the same class. The situation you described above is most likely due to the battery being full and it forcing the current down. There is a point where the BMS will completely shutdown the battery to protect itself if the charger continues to charge, ignoring the voltage levels.

As with any lithium battery it is vital that the user completely understand the voltage settings required to be programmed into the charge controller. If the controller used is unable to accept voltage setpoints that correlate to those described in the manual then another charge controller should be used that can. We recommend charge controllers from brands such as Schneider, Midnite, Morningstar, Outback and Victron.

Also, please note that it is still possible that a mis-programmed charge controller (allowed to charge at consistently at voltages that are too high) will shorten the battery cell's life and certainly void the warranty.

The cycle count parameter, visible with the Bluetooth app, may not correctly catch battery cycles that are not "deep". As such, if the user is regularly using the battery to say only 50% of capacity, like one would do with traditional lead acid batteries, then the programming of early V3's won't recognize that as a cycle. The cycle count isn't vital to the functioning of the battery but is of course very interesting to be aware of. A different algorithm is being used for newer HLX batteries that takes into account overall energy use for cycle count instead of SOC. Please note that the HLX warranty is no longer cycle count dependent.