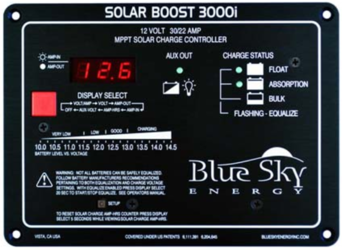 See our video with Blue Sky Energy/Genasun (one company now) with some great information on their solar charge controllers. Blue Sky product overview starts at 6:28.

The voltage step-down operation of the MPPT power converter also allows use of higher voltage lower cost 60 cell grid-tie PV modules at up to 22 amps of output current. The process of converting the much higher 60 cell input voltage down to battery voltage may produce a charge current increase approaching 200%.

Solar Boost 3000i’s sophisticated 3-stage charge control plus auto/manual equalization optimally charges flooded, GEL and AGM lead-acid chemistry batteries. A user configurable auxiliary output is also provided which can serve as either a 20 amp LVD load controller, 20 amp lighting controller with LVD, or 2 amp auxiliary battery charger for a second battery such as the engine start battery in an RV.

Solar Boost 3000i may also operate as an IPN Network Master controlling up to 7 remote Blue Sky Energy IPN compatible charge controllers such as the SB3024iL. Blue Sky Energy’s IPN Network allows multiple charge controllers to communicate with each other and coordinate their activities to charge the battery as a single coordinated charging machine. All networked controllers display through the SB3000i’s digital display and may share a battery temperature sensor, IPN-ProRemote display for high accuracy battery system monitoring, or Universal Communication Module (UCM) for remote access over the Internet.

Patented Solar Boost MPPT technology operates the PV module at it's optimum voltage where it can produce the greatest amount of power rather than at battery voltage. The higher power extracted from the module is then provided to the battery as increased charge current.

The actual charge current increase you will see varies primarily with module temperature and battery voltage. In comfortable temperatures, current increase typically varies between 10 to 25%, with 30% or more easily achieved with a discharged battery and cooler temperatures. What you can be sure of is that Solar Boost charge controllers will deliver the highest charge current possible for a given set of operating conditions.