We are no longer offering this product.

The below information is presented for informational purposes only. You may also find similar items in the category. 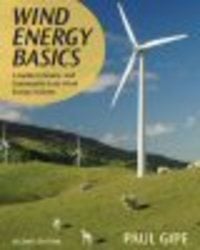 The wind power industry has been transformed in the 1990s by dramatic breakthroughs in efficiency, economy, and adaptability.

The availability of clean, renewable power is without question going to be the defining challenge and goal of the 21st century, and wind will lead the way.

Internationally acclaimed wind energy expert Paul Gipe is as soberly critical of past energy mistakes as he is convincingly optimistic about the future. The overwhelming challenge of transforming our world from one of fossil carbon to one of clean power seems daunting at best—and paralyzingly impractical at worst. Wind Energy Basics offers a solution.

Wind power can realistically not only replace the lion’s share of oil-, coal-, and naturalgas– fired electrical plants in the U.S., but also can add enough extra power capacity to allow for most of the cars in the nation to run on electricity. Gipe explains why such a startlingly straightforward solution is eminently doable and can be accomplished much sooner than previously thought—and will have the capacity to resuscitate small and regional economies.

Wind Energy Basics offers a how-to for home-based wind applications, with advice on which wind turbines to choose and which to avoid. He guides wind-energy installers through considerations such as renewable investment strategies and gives cautionary tales of wind applications gone wrong. And for the activist, he suggests methods of prodding federal, state, and provincial governments to promote energy independence.

"This second edition of Gipe's Wind Energy Basics is a much needed critique of the state of small wind today. Gipe advances what will inevitably be a growth industry in the US, community wind projects, based on the successful models in many parts of Europe over the past three decades. Paul also advocates for equitable feed-in tariffs for wind to level the playing field for wind turbines that work. Finally, Gipe wades through the numerous internet wonders and surrounding hype that are doing more harm then help for prospective turbine owners. Wind Energy Basics is a must read, and reread."

—Mick Sagrillo, "Advice from an Expert" columnist for the American Wind Energy Association and coauthor of Power from the Wind

"If you want straight talk on wind electricity, with no bull, seek out Paul Gipe. Not beholden to any company or segment of the industry, Paul tells it like it is. His no-nonsense book will steer you in the right direction--away from fantasy and failure and toward a successful wind-electric system."

Paul Gipe has written extensively about renewable energy for both the popular and trade press. He has also lectured widely on wind energy and how to minimize its impact on the environment and the communities of which it is a part. For his efforts, the World Wind Energy Association presented Gipe with their World Wind Energy Award in 2008, the World Renewable Energy Congress honored him as a "pioneer" in 1998, and the American Wind Energy Association named him as the industry's "person of the year" in 1988.