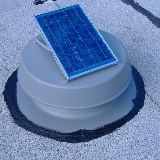 If you’re looking for an inexpensive way to use solar energy in your life, consider using a solar attic fan to exhaust hot air from your attic. These fans are powered by electricity generated by solar electric panels. The solar module may be integrated with the fan or physically separate from it and connected only by an electric wire, which can allow for the best placement of each component. Installed on a rooftop or in an end-wall or gable, solar attic fans operate whenever there’s sunlight striking the solar module.

Using electric fans to cool off an attic space isn’t new; many households already use fans to expel excess heat that builds up under the roof. These fans are usually connected to household AC power using a manual or thermostatic switch. The principle is simple: air trapped under a peaked roof bathed in sunlight becomes very hot. By conduction, that heat passes into the rooms beneath through their ceilings, increasing the temperature of that whole story of the house. The result is either discomfort or an increased use of power-hungry air conditioning. By exhausting hot air from the attic space, attic fans reduce the need for air conditioning, saving money and energy in the process.

Solar attic fans simply replace the grid energy source with free solar energy. They run when you need them most-- when the sun is shining and adding heat to your house. They eliminate the need for AC wiring because the fan comes with its own power supply, a small solar panel wired directly to the fan; and they can be installed anywhere that full, unobstructed sunlight is available for their solar modules.

Some models are self-contained units that must be installed on a rooftop where they can both receive solar power and best vent the attic or building space. Other models allow for the fan and the solar module to be installed separately; in these models, the fan is typically mounted between framing studs on an end-wall or gable wall of an attic, usually where a passive vent hole already exists. The fan is aimed to blow air out of the attic, thus drawing cool air into the attic from other vent openings. The solar module powering the fan is typically installed on the rooftop or bracketed to an overhang. The module and fan are then connected using the supplied electrical cable. All solar attic fans have DC motors that run “solar-direct”--- that is, directly from current produced by the solar module as it converts sunlight into electricity. That means daytime use only, but that’s also when the attic gets the hottest and venting is most needed.

Solar attic fans can provide year-round benefits, even in the wintertime when excessive heat is not usually a problem. Wintertime ventilation can help to prevent moisture build-up in the attic space that might otherwise dampen insulation, reducing its effectiveness, or contribute to mold growth,  peeling paint or flaking plaster.

Some manufacturers, such as Natural Light, offer an optional thermal switch that can limit the fan’s operation based on attic temperature. When the preset minimum temperature is reached (80°F. for this brand), the fan will turn on as long as there’s sunlight to power it. At a preset minimum temperature (70°F.), the fan will turn off, even if sunlight is available. You can decide if a thermal switch makes sense for your installation based on your interest in winter or cold-weather venting.

Solar attic fans are not ideally suited to all houses, so make a careful evaluation before you buy one. There are different models for peaked and flat rooftops and installation varies accordingly. Peaked rooftops with unfinished attic spaces are the most common installations. Some models’ solar modules are adjustable to allow better aiming into the prevailing sunlight, while some have modules that are integral to the fan housing and are therefore dependent on the roof pitch for how well they're aimed toward incoming sunlight.

Be certain that the orientation of your house is good for solar exposure. Shadows from trees or chimneys or other buildings will render your solar attic fan useless. Also note how the sun’s angle in the sky changes during the year. If you plan your attic fan installation based on the winter sun angle, you may find a very different situation on your rooftop six months later! The good news is that during summertime in the northern latitudes, the sun’s path is more directly overhead, so chances are that most winter shadows will be out of your way.

Another important consideration is the need for passive venting. Hot air blown out of the attic space must be replaced by cooler air from somewhere else. You know what they say: Nature hates a vacuum! So your attic must have sufficient intake venting. Common sources include passive vents in the soffits or the end-walls of the attic. If your house has ridge venting, a roof-mounted solar attic fan may not be right for you. Ridge vents are designed to release hot air that has risen and accumulated under the peak of the roof. A solar attic fan would tend to compete with the ridge vents and may actually draw replacement air in through the nearest vents, creating a small area of airflow that leaves the majority of the hot attic space underserved. In this case, a gable or end-wall solar fan may be the better choice.

Rooftop solar attic fans can be installed by any competent contractor, roofer, or handyman with roofing experience. Since cutting a hole in the roof deck is necessary, choose someone whose work you trust and who offers a warranty against water leaks. On a pitched roof installation, the fan should be placed as high up toward the peak as possible in order to release the hottest air that has risen into the area near the peak. By contrast, gable-type solar attic fans do not require a hole in the roof, since the fan itself is located inside the attic space. For these installations, 2 x 4 blocking, spanning the gap between the mounting studs, can help direct the flow of air outward, increasing efficiency. If a passive vent hole already exists in the target wall, it may need enlargement to accept the volume of airflow from the fan; if there is no hole already present, one must be cut to allow the fan to exhaust hot air to the outside. Of course, the hole should be covered with wire mesh, to keep animals out, and with venting slats, to keep out precipitation. 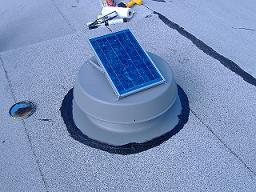 Solar attic fans range in price from about $350 up to $600 for complete kits and can even include screws and roofing mastic for sealing roof-mounted fan housings to the roof deck. Installation is not included but can be done by any competent homeowner or professional.