Each solar panel, or module, is rated to produce a certain wattage, voltage and amperage under specific conditions. Learn more about how modules earn these ratings and what factors affect energy production.

The industry standard against which all PV modules are rated and can be compared is called Standard Test Conditions (STC). STC is a defined set of laboratory test conditions which approximate conditions under which solar panels, or PV modules, might be used. Although there are other standards that offer better real-world approximations, STC offers the most universal standard. The same standard is also used to evaluate potential installation locations, since it is the basis for values. STC includes three factors:

Every model of solar panel has unique performance characteristics which can be graphically represented in a chart. The graph is called an “I-V curve”, and it refers to the module’s output relationship between current (I) and voltage (V) under prevailing conditions of sunlight and temperature. The curve looks like a seated person’s leg: 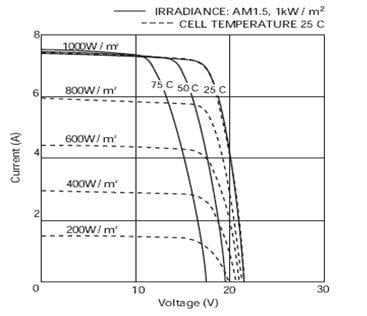 Theoretically, every solar panel has multiple I-V curves (several of which are shown above for one particular module)— one each for all the different combinations of conditions that would affect the STC rating parameters above: temperature, air mass, irradiance… that’s a lot of possible graphs! You can see from the illustration above that this module loses voltage as the cell temperature increases; that effect is common to all crystalline modules.

Because of Ohm’s Law (and the equation Power = Voltage x Current), the result of reduced voltage is reduced power output. The ideal position on any I-V curve—the sweet spot where we can collect the most power from the module—is at the “knee”. That’s the maximum power point (MPP), and you can see that its position changes with temperature and irradiance.

In battery-based PV systems, an MPPT, or maximum power point tracking charge controller monitors the array constantly to find the ever-changing MPP and thus capture the most power from the array. In straight grid-tied systems, MPPT technology is built into all the inverters, so these systems tend to have very high .

Two groups of conditions which can boost voltage—and change the MPP—in a PV or solar electric system include over-irradiance and temperature effects . Over-irradiance is just a fancy way of saying sunlight with an intensity above the standardized STC value of 1,000 Watts per square meter.

Over-irradiance can occur in several ways:

Temperature effects are the result of an inherent characteristic of crystalline silicon cell-based modules. They tend to produce higher voltage as the temperature drops and, conversely, to lose voltage in high temperatures.

Any solar panel or system derating calculation must include adjustment for this temperature effect. Usually, this derating is performed when calculating the sizes of related system components, such as charge controllers or grid-tied inverters, as these components must be sized to handle the possible current spikes from the PV array caused by over-irradiance and temperature effects.

Grid-tied inverter sizing, particularly, relies on identifying the lowest recorded temperature at a proposed site. Inverter manufacturers include this variable in their tables or online PV string-sizing tools. They, in turn, get factoring data from the , Section 690.7. If a low temperature is even remotely possible, you must plan for it or you risk frying your charge controller or inverter. Since module voltage could spike under bright sunlight and lower temperatures, you need to ensure that your charge controller or inverter can handle the highest possible voltage and current.

Careful homework pays off (in an undamaged system!). For site temperature data, I recommend consulting the weather data available at weather base .

It’s All in the Planning

In designing a PV system, STC is your first guide for sizing and planning. But STC is based on laboratory conditions. Solar panels have unique I-V power output curves which vary with changing real-world conditions. There are many factors that can boost modules’ output above STC, including over-irradiance and temperature effects. Following appropriate derating procedures will ensure a safe and effective PV system.