A brief description of the major components of a Solar Panel (Electric) System. The components vary depending on whether batteries will be used in your system. And there are additional small components required for a complete installation that are not listed here.

Solar electric systems are a popular choice among renewable energy options due to the relatively low maintenance requirements and the long lifetime of many of the system components. Because there are no moving parts, and thus little chance of mechanical failure, most solar electric systems will continue to produce power for 30 years or more!

Although some smaller solar electric systems can be relatively straightforward to install, many people choose to hire installers. Regardless of whether you plan to install an cabin system yourself or have a contractor install a system, you will benefit from understanding and properly maintaining each component in your system.

PV modules are known as solar panels or solar electric panels. We'll be using the terms interchangeably throughout this article although "PV Module" is the more technically correct terminology.

Solar panels provide electricity from sunlight. They are typically made of silicon crystal slices called cells, glass, a polymer backing, and aluminum framing. Solar panels can vary in type, size, shape, and color. In most cases the “size” of a PV module refers to the panel’s rated output wattage or electricity generating potential. Solar panels also have voltage ratings. Those with of 12 or 24 Volts are generally preferred for off-grid systems with battery banks. Other solar panels come in less common nominal voltages such as 18, 42, and even 60 Volts. These modules are typically used in grid-tied applications to accommodate the working of grid-tied inverters. Solar panels can be used alone or combined into arrays by wiring them in or in to achieve the needed . The price of most large residential or commercial PV modules can range between $2.20 and $3.40 per rated watt.

In PV system terminology, everything besides the PV modules themselves is called “balance of system” or BOS. We’ll go over the main BOS components below, one at a time, in the direction of electricity flow through a typical system.

Solar panel mounting systems include hardware to permanently affix the array to either a roof, a pole, or the ground. These systems are typically made of aluminum and are selected based on the specific model and number of modules in the array as well as the desired physical configuration. Solar Panels work best at cooler temperatures, and proper mounting allows for cooling airflow around the modules. For all locations, wind loading is an installation factor, and it is extremely important to design and pour the cement foundation properly for any pole mount. are a pole mount option to increase energy production by moving the array to face it into the sunlight as the sun moves across the sky. A solar array on a tracker will produce more energy than a fixed array. Trackers are often used in water pumping applications. The cost of a tracker can be significant, and due to the possibility of breakdown, they are best recommended to the mechanically inclined. The cost of a mounting system varies based on the number of modules and type of mount. The average cost is between $250 and $1,000 for a fixed array and $2,000 and up for a solar tracker. Another cost-estimating factor for mounting racks is $0.50 to $1.00 per rated array Watt.

A combiner box is an often-overlooked, yet essential part of most solar electric systems. The combiner box is an electrical enclosure which allows multiple of solar panels to be combined in parallel. For example, if you want to wire together two 12 Volt panels for your 12 Volt system, you will wire each panel’s output directly to terminals inside the combiner box. From the combiner box you can then run just one positive and one negative wire (in appropriate conduit) to the next system component, the charge controller. The combiner box will also house series string fuses or circuit breakers. These boxes are usually outdoor-rated, and meant for placement right next to the array or solar panels. Combiner boxes usually cost between $80 and $140 USD.

Batteries chemically store electrical energy in renewable energy systems. They come in several voltages, but the most common varieties are 6 Volt and 12 Volt. The three types of batteries that are most common to RE systems are:

Flooded lead-acid batteries are the most cost-effective variety. They require maintenance that involves monitoring voltage, adding water, and occasional . Additionally, FLA batteries vent hydrogen under heavy charging so they must be stored in a ventilated enclosure. Because of the maintenance issues of FLAs, some people prefer sealed batteries, which don’t require maintenance. Since they are sealed, they do not require watering, nor do they typically vent any gasses. AGM batteries cost more and are more sensitive to overcharging than FLAs.  Gel Cell batteries are similar to AGMs in that they are also sealed and therefore do not require maintenance, but tend to be the most expensive of the three types. The useful life of all battery types is measured in rather than units of time. is directly related to number of charge cycles possible: the deeper you drain batteries each time you use them, the fewer charge cycles you will get from them. Sealed batteries tend not to last as long as flooded batteries. Well-maintained FLAs can last as long as ten years, with sealed batteries lasting closer to five years. Other factors to keep in mind are that some of these batteries weigh over 200 pounds and, depending upon capacity,  can cost anywhere from $20 to $1200 each. So, given the maintenance issues, weight and expense, consider your energy storage needs very carefully. Planning for five days of battery storage for your system may not be your best option! 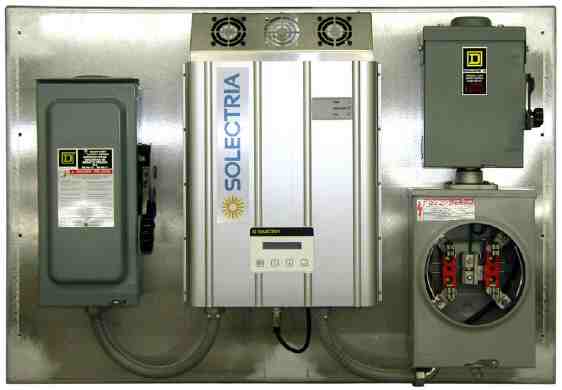 An inverter takes (DC) from batteries and turns it into (AC) which is used to run most common electrical loads. There are two main classes of inverters, or grid-capable and , standalone units.

Off-grid inverters require batteries for storage. Straight grid-tied inverters don’t use batteries and grid-capable inverters can work either with or without batteries depending on system design. There is a wide range of available inverter features suited to differing system needs and situations. Some inverters have integrated AC chargers so that they can use AC power from the grid to charge the batteries during periods of low sun. Inverters with integrated AC chargers can also be used in conjunction with fossil fuel-based generators for battery charging or running very large loads. Off-grid inverters meant for whole-home usage must have appropriate conduit boxes and accessories that enclose all live wiring. Usually, whole-home inverters are rated to produce 2,000 Watts continuous power or more. Off-grid inverters come in two flavors: those producing current and those producing current. Some appliances (compressors or other inductive loads) and many sensitive electronics (cordless battery chargers, computers, stereos, etc.) will not function properly on modified sine wave power. Off-grid inverters can cost anywhere between $100 to $3,000 depending on size and type.

A straight grid-tied inverter connects directly to the utility grid without the use of batteries. With these inverters, when the grid goes down the PV system also goes down to protect service linemen from injury due to unexpected “live” lines during outages. A grid-capable inverter can both connect to the grid and use batteries, which allows for the possibility of back-up power during outages. Grid-connected inverters also generally produce 2,000 Watts or more and cost about $2,000 to $4,000.

No () code-compliant system can live without disconnects! The DC and AC disconnects of a PV system are manual switches that are capable of cutting off power to and from the inverter. Some inverters have disconnects with switches integrated into their structure. Other systems use an integrated power panel to support the inverter(s) and their associated disconnects in an organized arrangement. In still other cases, you will need to purchase the appropriate disconnects separately to work with an inverter. The disconnects are used by service personnel or authorized persons (fire/police/electric workers) to stop power from a renewable energy system reaching the inverter. (Don't forget that there are capacitors in most inverters that can hold a lethal charge for up to several minutes after incoming current is cut off! Consult the inverter manual for safe access times.) Disconnection prevents the current being produced from going beyond the disconnect point to a downed utility grid or damaged component. Homeowners or authorized personnel can use disconnects to de-energize a system for maintenance or service. Disconnects can range in cost from $100 to $300.

Cables, connectors, conduit and brackets -- oh my! This category includes everything you need to connect all the parts together safely and securely. As with most specialized technologies, there are many parts and tools involved in the proper installation of a safe and effective PV system. It is the responsibility of the installer to have a thorough understanding of them and of all the rules and regulations pertaining to solar electric installations (NEC Section 690 is key here). Gaining the knowledge needed to design and install a safe, efficient system not only ensures that your system will meet your needs effectively but also keeps you and your home safe and helps to promote the acceptance of renewable energy as a mainstream energy source.

We are thrilled that you are pursuing a PV system. Whether you choose to install the system on your own or whether you hire a professional installer, please be sure to adhere to National Electric Code for safety. Our PV installation Books & Educational Videos make great references as well.