Help with the plan for my electric system on my boat

I'm customizing my boat and one of the main things I"m doing is installing a new 24V electrical system. I've been doing tons of research over the last several months and am finally ready to start. The link below will take you to my plan so far;

Here is where I need some of you knowledgeable people to help me (please!)

I'm not sure if my wiring diagram is correct, or if I've made good decisions with the components. Please take a look at it and let me know your suggestions, comments and complaints.

Thank you very much!

Thomas Anderson
99 Posts
Re: Help with the plan for my electric system on my boat


I'm a little confused about your battery wiring. What you want is two parallel banks of two 12V batteries in series (for 24V); I'm not sure that's what you've got here in the diagram.

Make sure you use sufficiently sized cables for your batteries (triple-aught, I think) in the series connections. I would recommend a battery switch on the positive leads to each bank so that you can disable one for maintenance while still having power from the other one. Also a fuse on the positive leads. You'll have to check the rated amperage of your motors and maximum draw of your batteries to determine the appropriate size fuse. Probably around 200A.

I don't like the 4x AC charger when you're using a parallel/series layout -- I would use a 1x charger and run it to your battery switch. The AC charge controller should also be appropriately sized for your batteries. If you have these four batteries in parallel banks of series batteries setup, then you'll have 490Ah @ 24VDC. Somewhere between 5% and 20% of your batteries' rated amp-hours will both charge in a reasonable amount of time and also prevent overheating. So for your 490Ah, you want a DC output of between 24.5A and 98A @24VDC.

If you have the room and the cash, I would scale up the PV panels and charge controller. 100W isn't going to do much to charge your batteries. I would think about 2x 200W panels and an Outback Flexmax 60.  That charge controller will be robust, provide system status, enable equalization of batteries, and provide plenty of room for future expansion if desired. 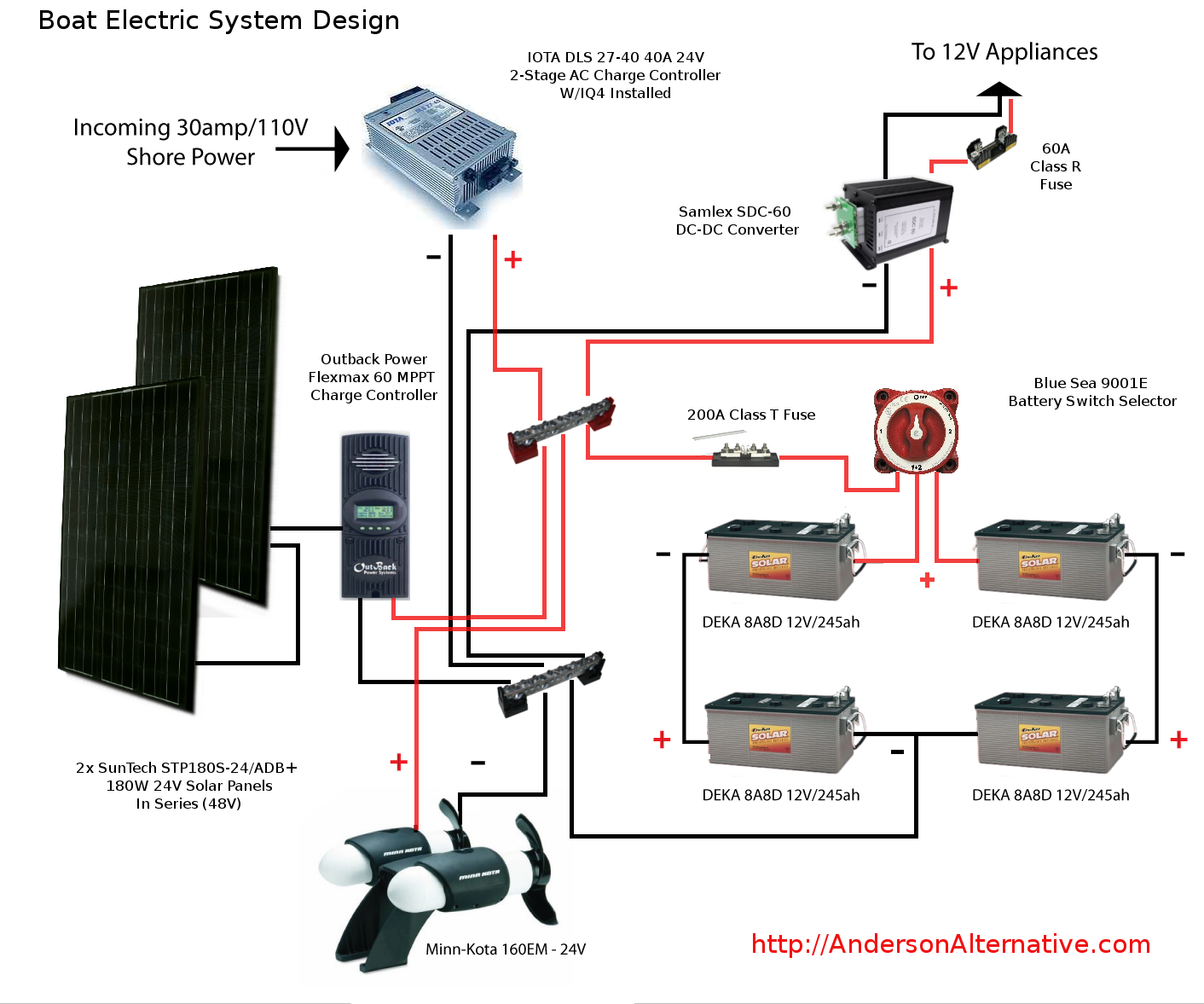 BTW, in this configuration, you can actually shut off both battery banks entirely and still power your DC loads from the IOTA, which acts as a DC power source in addition to a charger, while on shore power.  However, you would be limited to the 40A output (80A @12VDC -- more than the SDC-60 can put out anyway).  That said, it would be best to have batteries connected whenever possible.

One more consideration... if your motors use approximately 100A (2400W), then you'll have just over 2 hours of run time before the batteries are discharged 50%, which is about as far as you want to take them.  In an emergency, you could of course get more, but you might damage or shorten the life of your batteries.  Putting an automatic cutoff or at least a low-voltage alarm in the system would be a good idea.  If you need more run-time than that, consider adding a third bank of 2 batteries or increase the size of these four batteries.


Thank you very much Thomas for your extremely helpful reply!! I really appreciate it!!

I'm a noob to all this, and not much of an electrician to start with (I usually get my Dad to help!!).

Unfortunately, I can't get to the diagram that you posted in your reply. I get an error stating I don't have permission to access.

Hopefully when I see your diagram, I'll better understand how you suggest hooking up the AC charger, the battery switches, fuses, etc. I definitely want to do this right.

The Minn-Kota em160 I bought does say at full power it will use about 100-110A, but my plan is to use primarily for getting off & on the trailer, docking, cruising through canals & stuff, and backup power. I do plan to go to 6 batteries eventually, so that will help as you said.

Feel free to send me that diagram directly via email if you'd like - neobrett (at) mailforce (dot) net
Thomas Anderson
99 Posts
Re: Help with the plan for my electric system on my boat


Sorry about the image blocking on my server... you should be able to see it now.
Brett Williams
3 Posts
Re: Help with the plan for my electric system on my boat


I really like your diagram and plan on following it almost exactly. The only change I have to make (because of size) is the solar panels.

I am completely restoring (actually moe like customizing) my 1988 Marathon 2550 Bermuda Express and I've got a deadline to get some of the exterior and functional stuff done before Spring break this year. So, I've got a Month to go. Because of this, I'm going to do this 24v system in stages.

I will post some pictures of my boat as it progresses, particularly as I intall the components for this 24v system.

David Ames
220 Posts
Re: Help with the plan for my electric system on my boat

A great project there Brett, Looking forward to the updates.

Hats off to Thomas for going the extra mile, It does take a bit of time to work up a custom sketch..now the whole community can benefit from it, so thanks for that.

Cheers, Dave ............<- who has been having issues logging in to the forum for some time now! seems to be working now (fingers crossed)
Thomas Anderson
99 Posts
Re: Help with the plan for my electric system on my boat


No prob.  Glad to help.  Good luck.  I look forward to some photos.

The Alternative Energy Store, Inc reserves the right, within its sole discretion, to refuse or delete any posting or portion thereof, or terminate or block the access to this forum.

Click on an icon to share! If you don't see the method you want, hover over the orange "+".

What can we do to help you?

Sorry, the copyright must be in the template.
Please notify this forum's administrator that this site is using an ILLEGAL copy of SMF!
Copyright removed!!