What to Know About UL 9540 and Energy Storage Systems 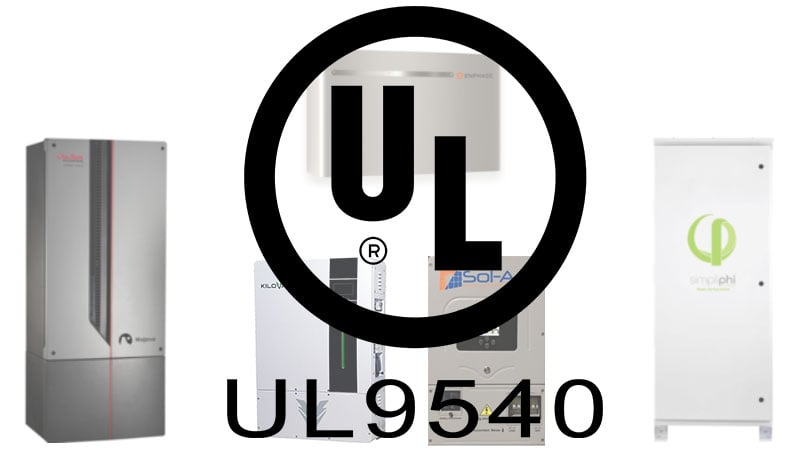 If you follow news about energy storage systems (ESS) or have been looking into a home battery backup system lately, you’ve probably come across the term “UL 9540”. But what is UL 9540 and how important is it to ensure your home energy storage system is certified to this level?

Because an ESS includes multiple components, the UL 9540 standard actually encompasses two other, older standards: UL 1973 (for the stationary battery pack) and UL 1741 (for the inverter). These two individual standards – in conjunction with rigorous thermal and electrical testing and evaluation of the components working together as a system – comprise the UL 9540 certification.

While UL 9540 is a set of standards an energy storage system must perform to, UL 9540A is a method of evaluating thermal runaway propagation in an ESS. So while UL 9540A is not a certification, it does provide important data for manufacturers seeking to get their ESS products certified to UL 9540 and for their engineers and product developers to verify the effectiveness of the product’s protection against critical hazards like fire.

There are four stages in the UL9540A test method:

Is UL 9540 Certification Required for an ESS?

Certification of an energy storage system to UL 9540 is currently not required in most jurisdictions in the United States. However, the California building code has adopted International Residential Code (IRC), which requires UL 9540 for ESS. Massachusetts has also recently adopted the code. We expect it is likely that other cities and states across the country follow these states, and begin requiring it in the coming years.

Even if UL 9540 is not required where you live, restricting your energy storage system search to UL 9540 systems will bring benefits like:

If you’re shopping for an ESS, don’t worry about UL 1973 and UL 1741 because as long as you see a “UL 9540” or “Certified to UL 9540” mark on an ESS ensures the system you plan to entrust you home power storage needs to is safe and designed to perform at a high level.

altE has made shopping for a safe, high-performance ESS easy with our selection of UL 9540 certified Energy Storage Systems from SimpliPhi, Sol-Ark, KiloVault, OutBack, Schneider, and Enphase.