How To: Wiring Solar Panels in Parallel with Couplers 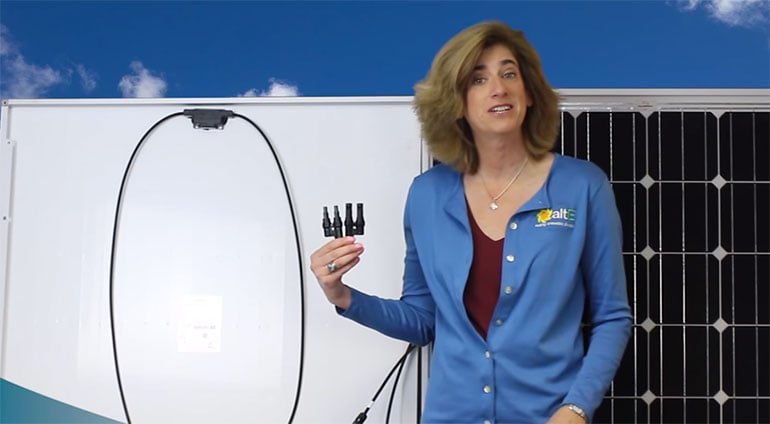 Keep in mind, you’re not going to use this for a large solar system. It will be able to handle up to about 30 amps for the particular model (used in the demo), so if you do get couplers, double check that they can handle the amount of current you are going to be putting through them. You do not want to wire more than 2 panels in parallel using couplers, because this does not give you over-current protection between the two panels. The solar panels are usually designed that they can handle being backfed from one panel, but if you have a whole bunch, you do run the risk of ruining your solar panel.

The first thing to do is figure out what kind of connectors you’ve got on your solar panel. In our demo, we have an MC4 compatible locking connector. This is a newer panel, so if you have an older panel, maybe 2008 or older, it might have a non-locking connector, such as the MC connector. This is important because these are not inter-connectable, so you want to make sure you know what kind you’ve got, either check the datasheet or it may have it stamped right on the connector.

You want to get couplers that match that type of connector. And you’ll get two – one that’s got 2 females and 1 male, and one with 2 males and 1 female. You are going to take female from one, and plug it into the connector, and you’re going to take the female from the other panel and you click that in together. So, that has now wired your positives together. Now, take the negatives and you’re going to put it in the connector, so now we have the two males wired together and the 2 females wired together. What this did is it took the two solar panels and it kept the voltage the same, but it doubled the current, because when you wire in parallel, you’re going to be doubling your current. This is important if you want to keep things at the same voltage, but increase the current.

So what do I do with that? Well, we are going to get an extension cable that’s the distance between the panel and the breaker that I’m going to, whether I’m going into a DC Load Center or a charge controller that has a breaker built in. So, you are going to need to know the distance that you are going, and you would get connector cable, and extension cable that is 2x longer than what you need the distance to be, because what you are going to do is you are actually going to cut it into two. And so, that will give you one cable for your negative and one cable for your positive. You are going to cut and strip each of them, so you’ll end up with a female on one end and cut and stripped on the other. And a male on one end and cut and stripped on the other. So now, we are just going to very simply, take these two cables and connect them to the output of the couplers. We now have two solar panels, wired in parallel, and they are now able to go the distance back to the rest of the system, to the breaker and to the charge controller.