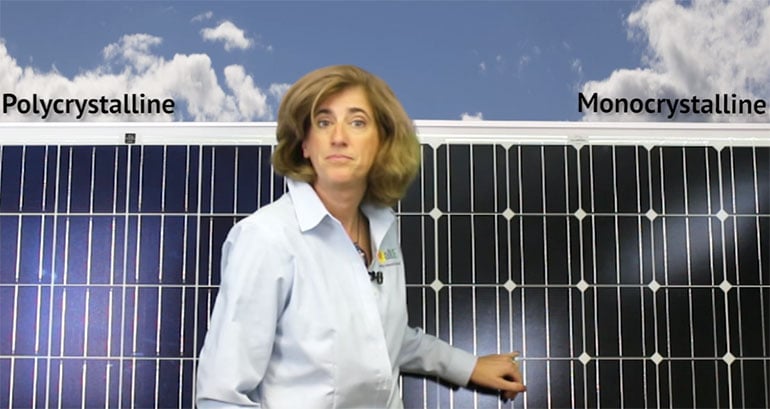 We are often asked what the difference is between monocrystalline and polycrystalline solar panels.

A couple of things stand out right away with their appearance. This is due to how solar cells are made. The monocrystalline solar panel is a consistent black or very dark blue color. It is cut into wafers with diamond covered wire from a conical silicon ingot, grown in a lab. To make the ingot, the silicon rocks are melted at 2,500 degrees Fahrenheit, a seed crystal is lowered into the melted slush, and slowly pulled up while rotating. It’s almost like making a hand dipped candle, but instead of melting wax, you are melting rocks.

Due to the cone shape, there is a lot of material wasted as they cut it into the required square shape. That’s why they usually have rounded corners, to help minimize waste. If you look at older solar panels, they actually made them with round cells.

Polycrystalline cells are made a different way. They load about 1,300 pounds of silicon rocks into a 3 foot by 3 foot quartz mold to create the square shape needed. It takes 20 hours to melt, and about 3 days to cool down.

The polycrystalline solar panel has a mottled look, like a piece of particle board, it looks like it is made up of multiple pieces of silicon pressed together. That is actually caused from when the melted silicon cools and hardens, it crystallizes, like frost on a window. When it is cut into the wafers, there is much less wasted material than from the conical mono ingot, and is a less expensive manufacturing process.

OK, so monocrystalline panels look different and cost a little bit more than polycrystalline. But the big question is, is it worth the extra cost? To help answer that, let’s talk about performance differences.

Another performance difference is how they react to temperature. Monocrystalline panels handle heat and lower light conditions slightly better than polycrystalline. How slight is slight? Comparing the temperature coefficient of the two types shows us that monocrystalline short circuit current drops 0.04% for every degree kelvin over standard test conditions. So, if it is 20 degrees hotter on the roof than in the test suite, which is highly likely in the summer, the monocrystalline solar panel can lose .06 amps out of 8 amps. For polycrystalline, it loses 0.051%. That equals losing .08 amps. So, the difference is two one-hundredths of an amp.