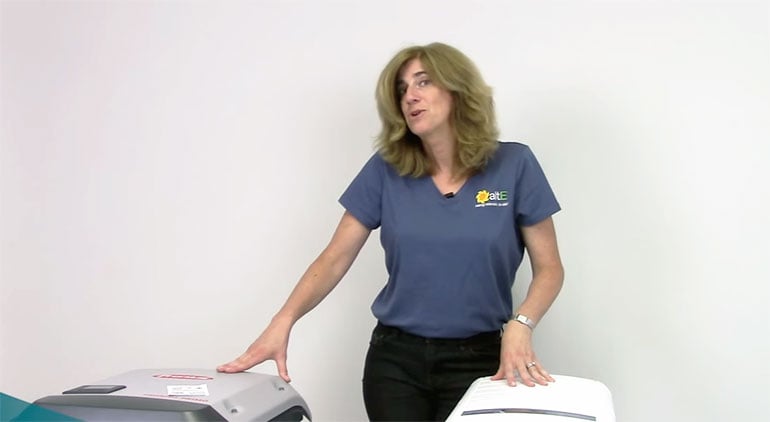 What’s the difference between several different types of grid-tie inverters, including a string inverter, string inverter with DC optimizers and micro inverters? Our Solar Queen explores each option.

With a string inverter, as its name suggests, you would wire multiple solar panels in a string into the inverter. You can have multiple strings each going into its own MPPT channel, so that each string of panels is independently managed.

The downside to this is that if one of those panels in that string does have some shading issues, it can potentially bring down the power output of that whole string. Many, however, now have multiple MPPT inputs so it would only affect that particular string.

A key advantage of these is they are typically easy to install; you would just bring the multiple strings in conduit right into the knock outs in the bottom of the inverter. It has an integrated DC disconnect too, so it’s very, very simple. String inverters tend to be the least expensive option for inverters.

Over at SolarEdge, they do things a little differently – breaking out their DC optimizing from their inverting. What you would have is an optimizer that is installed underneath the solar panel, it connects via the MC4 connectors to the solar panel and then just via MC4 connectors to the next optimizer and so on and so on. Then you would bring strings of up to 5, 250 watts down into the integrated DC disconnect that’s in the bottom of the inverter.

This combination is nice because this individually manages each solar panel. If you have any shading issues on any of the panels, only that particular panel will be affected. You can also do individual panel level monitoring, so you can see what each panel is doing, as opposed to with a string inverter, where you would have just a view of the entire string, not each individual panel. It’s very rare though, that you’re going to need to get down to the individual panel level of monitoring. Generally, just knowing what’s going on in the string is quite sufficient.

The Enphase micro inverter connects to the solar panel itself and then it goes by its proprietary output connector. Now this does all of the inverting right at the panel level, so it’s DC power going in and AC power coming out and it would connect to its proprietary cable. You just connect it and then you wire (up to 17) in series and it all goes right down into your AC breaker box. This is a nice, easy way to install, it has panel level monitoring and panel level inverting, so any other inverters are not going to affect this particular panel.

Micro inverters tend to typically be a little bit more expensive option, but, again, you do have the ease of installation. So, it can often save time, which case can be very cost effective.