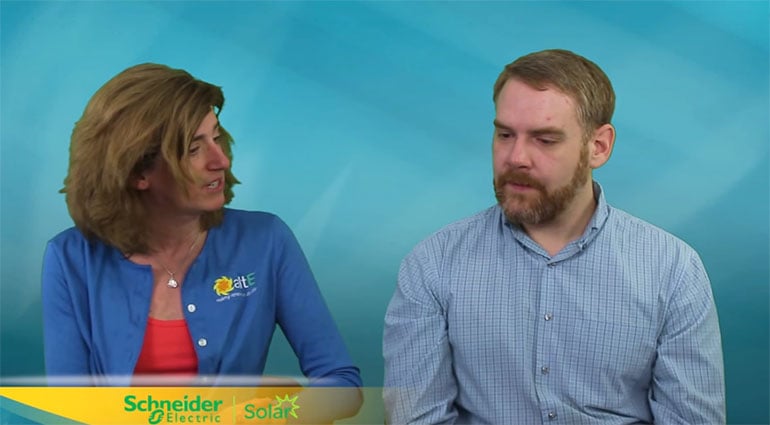 We sat down recently with John Webber from Schneider Electric to talk about different options for adding battery backup to your grid-tie solar system.

Watch the interview below. Full transcript.

altE: Now John, we’ve seen a lot in recent times where people have bought a grid-tie system, and then the grid goes out, and their solar system goes out, as is required by UL. We call it a lot of buyer’s remorse out there. Sso what are some of the options that we’ve got for adding batteries to their grid-tie system?

John: Yeah, so the kind of traditional thing that everybody talks about is, of course, AC Coupling. And exactly what and how AC Coupling goes together creates some issues that are not necessarily the healthiest environment for energy storage. Because when you AC Couple, you’re pushing power in a power outage situation from the grid-tie inverter back into the batteries in an essentially uncontrolled charge. And so unfortunately what happens there is that you can actually push a lot of power into the batteries, and not manage the batteries in the best way, which can shorten their life.

altE: Because in some solutions, some situations, AC Coupling is the right way to go. But now we’ve got some other options.

John: Yes. And, of course, if the customer is asking for more solar in the future, sometimes going to a DC Coupled solution, if they are saying gosh, I want more solar and I would like to have energy storage, then AC Coupling maybe needs to be set aside and we can talk about this solution.

altE: Excellent. Alright, so, DC Coupling. What does that entail?

John: If the customer already has a grid-tie system, and is asking for energy storage, you know we’ve talked about AC Coupling, but then when you bring in DC Coupling, we’re talking about actually taking out that central inverter and putting in a charge controller, which can manage the power from the array in an appropriate way to charge the batteries, as well as sell power back to the grid, say with the XW+ from Schneider.

altE: OK, so what would happen with your existing grid-tie inverter?

John: Pop it out or break the strings up if it makes sense.

altE: Right, OK, so most of the grid-tie inverters these days, they’ve got multiple MPPT strings going into it. So each basically 600V string is going independently into the inverter. So instead of going to the inverter, where would it go now?

John: We’d basically take that high voltage string of solar panels and we’d just put it onto an MPPT-80 charge controller from Schneider. And then that would appropriately manage the power, both in an off-grid situation, where the customer has lost power, but then because the XW+ can sell power back to the grid, it just becomes part of the grid-tie system, as well.

altE: Ok, so if their solar array is greater than 4000 watts, if they’ve got multiple strings, what would they do?

John: So they could, like we talked about, leave one string with the central inverter, and just make an appropriately sized backup system using maybe half that array. Otherwise, use can just pop out that complete system and just bring in two of the 80 amp charge controllers.

altE: OK, so a separate charge controller for each string. And both of them would communicate with each other and charge the battery bank. And that battery bank would then feed the XW inverter, which would go to the grid when it is up, and just power your critical loads when the grid is down.

John: Yeah. And the nice thing is, again going back, with kind of that comparison between AC Coupling and DC Coupling, is with AC Coupling, you don’t have a controlled charge, so the issue is that you are at risk of interestingly, undercharging your batteries. Because you are going to push too much power onto the batteries, which causes that voltage to rise, even though the batteries haven’t completed chemically that charge. With the DC Coupling system, those batteries will get a complete charge, which will make sure they last the life the customer and the installer expects.

altE: And a nice healthy multi-stage charge, which keeps the battery bank happy. And so, for each of those strings, what size battery bank would you recommend, for a 48V battery bank?

John: In general, we recommend, for a grid-tie system, with a single  XW+, at least 400 amp hours (Ah), and really when you think about what 400Ah is for a customer, that can get them through a 24-hour period power outage. Going much smaller than that, you are at risk, with some customers, pushing limits of that storage and unfortunately, getting real dark.

altE: Alright, so we’ve got the ability to replace each string of the grid-tie inverter with a high voltage 80 amp charge controller. We’ve got more controls of charging the battery bank. And then when we start talking about the Schneider XW+inverter, our interaction to the grid gives us more options than we’ve had before.

John: Yeah, so within the XW+, it’s kind of the Swiss Army Knife. There’s a lot of different ways to program and set the system up to actually leverage the energy that’s stored in the battery bank, when it comes to things like Time of Use, and just self consumption. So you know, self consumption is a pretty broad subject with a lot of interesting features. And the XW+will help you do that.

altE: Nice. So, instead of just when the grid is up, and you’re selling power to the grid same as usual, if you want to use more of your power and so you can save it, and use it yourself, and then sell any excess to the grid. Or, you can control what time you sell it, because for some locations that have Time of Use, different Time of Use charges, you’d be able to say, alright, sell it when they are going to pay me the most money for it.

John: Yeah. And so you can program the system with either Peak Shaving, where if the load goes above a certain amount, then the inverter will actually inject power from the batteries to help out. Or we can do Load Shaving, which we’re actually kind of slicing and bringing everything down a little bit, because we can cover a certain amount of amperage on the bottom end. And that really is the true self-consumption. So if Time of Use is a concern, customers consuming power during dinnertime, of course dinner time tends to be not when the sun is shining, or ideally shining. Then we can use that energy storage that we’ve charged up during the day to help reduce the power bill.

altE: Nice. And so, that’s really nice, when they’ve got different levels of rates from the electric company, where this can help you bring down to a lower level, so you’re paying less for your electricity.

John: Yeah. And there’s a little bit of complicated math that goes with that, because you do have to take into account what it actually costs to cycle the batteries. And so when you get into kind of that math, maybe a different subject matter, but it can cost 16 to 20 cents per kilowatt hour (kWh) when you are cycling those batteries, and you take the life of those batteries into account. So, if the customer is only losing 10 cents, then energy storage may not be the way to do that, but if it starts getting up into 20, 25, 30 cents, then there is real opportunity to use energy storage to mitigate those energy costs.

altE: Right, and the nice thing with the XW+ is you’ve got the ability to do different settings. It’s very flexible so if it makes sense for you, you can do it, if it doesn’t make sense, you just do your traditional selling to the grid whenever you’ve got extra.

John: Yeah, and the nice thing is it allows the customer and the installer to prepare for the future. Because it’s kind of hard to say, if you were to talk to somebody 10 years ago, what is the environment going to be like for grid-tie inverters or battery-based inverters in North America, I think you’d get a variety of answers, and not many of them would be correct. So, what is the next 10 years going to look like, or the next 15 years going to look like? So going with the grid-tie inverter that’s battery based like the XW+or the SW, those are really great ways to use and prepare for the future.