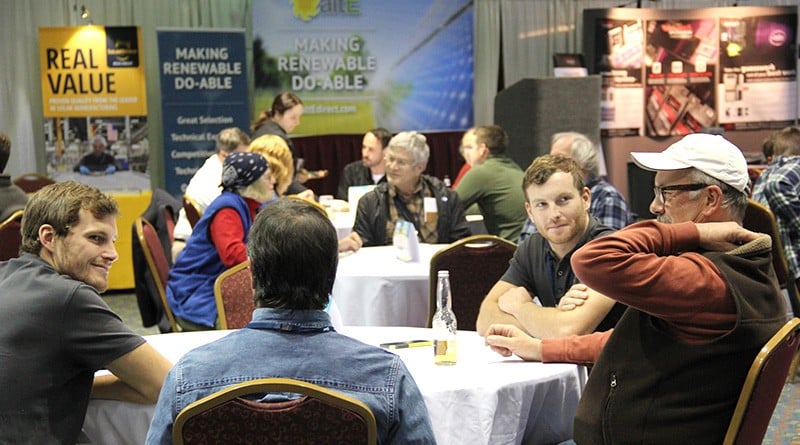 altE Direct, the wholesale division of altE, just hosted their 5th annual Solar Installer and Dealer Conference with a record turnout of installers and manufacturers from across North America. The solar conference was three days of learning, networking, and earning valuable NABCEP continuing education credits for our Installer customers. Dawson and Brian of Kyocera Solar with Matt, a solar installer.

Traditional lead acid batteries were well represented, as well as newer energy storage technologies such as salt water and lithium batteries, also a new version of the classic nickel iron batteries, originally invented by Thomas Edison. Other new additions to the conference this year were two wind turbines and river turbine manufacturers.

There were two days of breakout training seasons, 35 in total, that included a total of 17 hours of NABCEP continuing education credits. The third day of the conference featured a five-hour NABCEP Continuing Education credit course updating installers on NEC 2014 and upcoming 2017 changes, taught once again by the 2014 IREC Trainer of Year, Dr. Sean White, who has taught PV training classes throughout North America.

Also back again was the altE Garage Sale. The popular “altE Garage Sale” was once again a hit for installers during breaks to snag some ultra low prices on scratch ‘n dents.

Attendees got tremendous deals on one offs, discontinued products, and demo equipment. Anyone from New England knows how much we love a bargain around here. Kyocera  Solar, Midnite Solar, Morningstar, Schneider Electric and Stiebel Eltron and also raffled off their prizes to 5 lucky winners. Chase Brooks and Mark Finnigan, Jr – two of the three founders of Harvard Hard Cider company who served up the local brew tasting for the after-party party.

Now don’t think it was all work and no play. SolarWorld hosted a cocktail hour with an incredible array of food, including a carving station. OK, the cocktail hour was actually two hours.

After the cocktail hour, there was an after party with a local hard cider producer, Harvard Hard Cider Company, handing out samples of their three very different and very tasty hard ciders, including an innovative, hoppy IPA-like cider called “Missing Link” and our CEO’s favorite “Paradise”, which was steeped in black pepper and orange peel. Yum.

A Solar Conference Where Installers Get Exceptional Value

The great advantage of the altE Direct Conference over the larger conferences held at the large conference centers is the ratio of exhibitors to attendees. The solar exhibitors love the show because it gives them one on one time with the people who actually install their products. The solar installers and dealers love the show because it gives them time to ask the out-of-the-ordinary questions to the people who know the products inside and out. With hands on training sessions, they can learn time saving tips on how to install a solar system. Meeting and networking with other area installers lets them talk about issues they run into in their area, and how they address them.

Every year there are new breakout sessions, new vendors, new technologies and no additional costs for attending the educational workshops. In this fast changing world, the altE Solar Installer Conference gives the attendees a few days in the middle of the winter to stop and look around at what’s available to improve their business going into the Spring.

We at altE are already looking forward to 2017 when we host the 6th annual Solar Installer and Dealer Conference. We hope to see you there!

Manufacturers that Attended the 2016 Conference Chris from MK Battery/Deka Battery talking with an installer. Tony from Fronius talking with Ray, an altE customer, about the solar grid tie inverters Pierre and Denis from idenergie show off their new river turbine now in production.