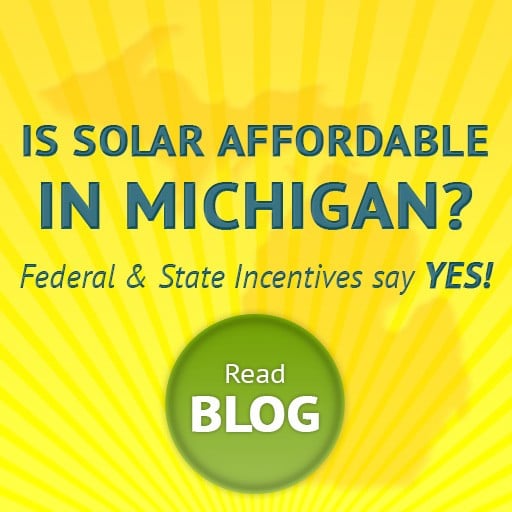 When looking at the cost of a solar power system, it can often look like a very scary amount – the national average for installed solar can be anywhere from $3-5 per watt of solar panels installed. So a 6,000 watt solar electric system could cost anywhere from $18,000 to $30,000. A DIY solar panel system could cost less. However, current federal, state, and utility rebates help to bring down the cost of these systems to something that is more affordable. These residential solar energy system incentives will vary by state, but let’s look at one state in particular: Michigan.

Example of a Solar Rebate in Michigan

Using the $18,000 as our start point, let’s look at the solar incentives we have. First, there is the 30% Federal Tax Credit. That will create a $5,400 tax credit that we can use to offset some of the costs, so now the system is down to about $12,600. Next, Detroit Edison has an incentive program for their customers, called SolarCurrents. This incentive pays $0.20 per watt up front, and a residual $0.03 for each kilowatt hour (kWh) of solar electricity generated and sent back to the utility through their net metering system.  So in this instance, Detroit Edison will rebate the customer an additional $1,200 (6,000 watts @ $.20 per watt), plus they will keep track, and pay back $0.03 for each kilowatt hour generated over and above the residence’s needs. An example of this would be a 6kW system that would produce, on average, about 800 kWh/month. If you used 700 kWh for a month, that leaves a difference of 100 kWh, or $3.00 going back to you.  So from a total cost perspective, the net cost of the home solar system has gone from $18,000 down to $11,400, with the potential for additional small revenue if the system is producing more power than what the house is consuming.

Learn More about Home Solar System Rebates in Your State

Incentives like these do vary from state to state, so it is important to use the right resources to find them. DSIREusa.org is a wonderful reference that lists incentives by state. While it does cover Federal rebates (such as the 30% Federal tax credit set to expire at the end of  2016), oftentimes a wealth of information can be found for states. Towns, utilities, and sometimes municipal power companies can all have their own rebates and incentives, helping to drive down the cost of a system. So if you are considering putting a solar power system on your property, contact altE today to see what rebates you have waiting for you!