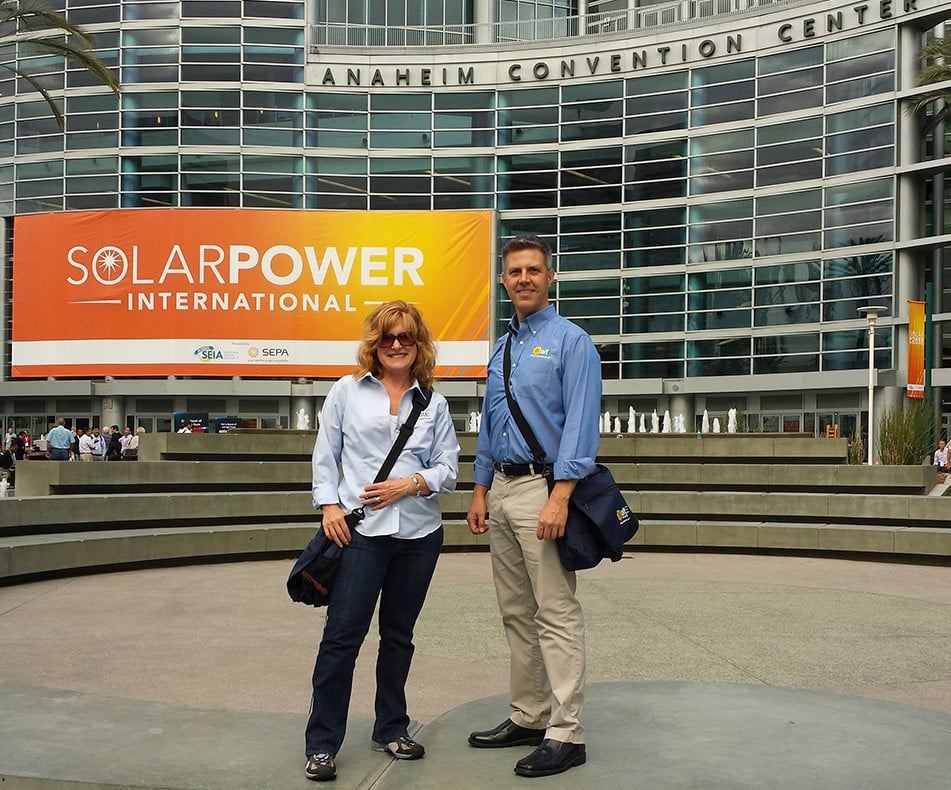 As Product Manager here at altE, I had a chance to walk Solar Power International 2015 trade show with our CEO, Sascha Deri. The event was held out in Anaheim, California this year, so since we were traveling from Massachusetts we really only had a short amount of time to do a whirlwind tour of the floor to see what was new and exciting! Check out our videos to see some of the cool, new, solar products we found.
Be sure to watch all 6 videos below!

A sealed maintenance-free battery with increased cycle life (up to 44%!). Ideal for partial state of charge (PSoC) operation. This is when the battery is infrequently, or never, returned to full charge – i.e. off grid, or limited sun hour areas. The carbon in these batteries increases conductivity and adds additional capacity to the battery, improving charging efficiencies in these PSoC scenarios. And going to a 30% Depth-of-Discharge vs. the standard 50% will give you an even greater cycle life improvement! We’ll have these batteries available for you to buy now, and Outback will have them available to ship a few weeks later! More and more states are mandating Rapid Shutdown of the solar array for safety purposes – per 2014 NEC code 690.12. Because of that, many of the Inverter companies have had to come up with their own Rapid Shutdown solution that works with their specific technology. This new Rapid Shutdown Box from Innovative Solar Inc is available in the popular SolaDeck roof flashing enclosure – and is universal – meaning it works with all grid-tie inverters! It’s offered in 600V and 1000V DC versions. This system discharges the inverter capacitors in less than 10 seconds, satisfying the code requirement. And operation is automatic – it’s immediately triggered when the fire department cuts grid power. It’s also rated for extreme temperatures (-40 degrees F to 158 degrees F). Coming soon! Come on – you know you’ve been waiting for it… well it’s here! (well almost…) An MPPT Solar Charge Controller from the popular Morningstar ProStar line of controllers. Offered in 25A and 40A models, it has lighting control, up to 200 days of datalogging, and can charge all battery types- including Lithium Ion. Ideal for off grid solar power systems up to 1200 watts. Shipping in October.

Available now, Magnum has come out with the 1st 100A MPPT charge controller  on the market.  It’s a cool looking controller, with a small footprint – and works with any of the Magnum Panels (MP or MMP). Compatible with12, 24 or 48V battery systems, you can put up to 6600W on this solar charge controller to handle a fairly large off grid solar array or hybrid solar power system (grid tie with battery backup). It also has both arc-fault and ground-fault protections in addition to other extensive electronic protections to make installation and operation very safe. We met the engineer, Mario, who designed the new KID line of solar charge controllers for Midnite. Robin Grudgel, president of Midnite Solar, recounted to us how Mario, as a kid, started out as a tech there assembling power panels. Midnite then put him through college to get his engineering degree and he now innovates new products, like the KID charge controller. So the KID was named after the nicknamed “Kid”, Mario, at Midnite.

Mario and Robin also announced that they will be coming out with 15 different wind products in the upcoming year – exciting for us wind enthusiasts! Three wind turbines – 200W, 500W, and 1000W, as well as a grid-tie inverter for the 500W and 1000W turbines. With that, Mario talked to us about the new Wind KID Charge Controller and KID Clipper which works as a dump load and allows you to control the speed of your wind turbine. This will keep the noise down and increase turbine life. So we’ll keep you posted as soon as we catch more ‘Wind’ from Midnite! We may have missed our opportunity to see Vice President Biden that morning but we did get to meet Fronius’ Four Fingered living inverter Snappy. It looks like this version of the Fronius inverter didn’t have a built-in fan, so we think she may not be an outdoor rated unit. 😉

We wrapped up the evening at SolarWorld’s customer party at Ralph Brennan’s Jazz Kitchen in Downtown Disney. They had their newest model of solar panel on display, the scrumptious, 54 Cell (18 Volt nominal, we suspect) cake panel with the new ultra v5.0 icing frame. Reports are it puts out about about 350 Watt-hours for a highly energy efficient 300,000 calories. Sadly, I was pulled away before we could try any.